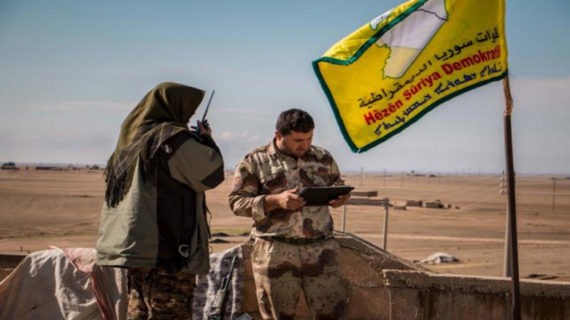 Nothing is ever easy or simple to explain in the Mideast. In this update, I will offer my viewpoint that events there have just become more weird and more dangerous. Specifically, Turkey seems determined to alienate all its former and current allies, and this trend is accelerating.

I would like to begin by pointing out an example of “media spin.” The first link is from the USA Today, and it has a headline of “U.S. risks alienating Turkey by arming Kurds.” It features the opinions of a former US ambassador to Turkey to support this mostly anti-USA article. It does mention the Pentagon believes arming the Kurds is the best way to defeat ISIS, but the headline is so pro-Turkey’s anti-Kurdish viewpoint that it predisposes readers to see this policy as a US (read “Trump”) policy mistake. It is clear to me that the USA Today has a perspective of trying to make Trump look bad however it can. The article does not mention in whose administration the former US ambassador to Turkey served. Was it in Obama’s administration or an earlier Bush administration? The article also makes no mention of any journalistic effort to find out whether this former ambassador is now a paid agent of the Turkish government. When one considers the entire history of Turkey’s refusal to fight ISIS in any meaningful way and its recent bombing of the USA’s Kurdish allies who are fighting ISIS,  the article’s headline could have been: “Turkey risks alienating USA by bombing America’s allies.” That would have given readers an entirely different predisposition to the facts of the story. Here is what is happening.

The second link, third link and fourth link describe the USA’s decision as a logical one to give heavier weaponry to the Kurdish fighting force which has proven the most effective and decisive in the war against ISIS. I find this decision to be entirely logical. As you are about to assault the former capital of ISIS, why not give better weapons to your best fighting allies? The fifth link offers more on the proven record of success by the Kurds in fighting ISIS. The Kurds are not alone in fighting with the USA against ISIS. The Sunni tribal Arabs have militias fighting ISIS as well, and there are even Christian militias fighting as allies of the USA, the Kurds and the Sunni Arabs (sixth link).

In previous posts, I have noted the effort of the Sunni coalition (which includes the USA) to put into position a blocking force of Sunni or Sunni-backed forces in eastern Syria and western Iraq to prevent a land corridor of entirely Shiite-dominated space between Iran and the Mediterranean Sea via Iraq and Syria. The Shiite forces, which include the Syrian government forces, are aware of this and the seventh link reports that the Syrian army is trying to reassert itself in eastern Syria–which would  push a Shiite corridor closer to a reality if successful. There may soon be another effort to make sure the Sunnis have a blocking force of military forces and territory to keep the eastern and western Shiite blocs from linking together. The eighth link and ninth link add that the USA, Jordan and other nations are putting forces at the Jordanian-Syrian border which may begin pushing northward to reinforce the formation of the Sunni blocking region between Iran and Syria. Turkey, which is Sunni Muslim, could and should be of immense help to the Sunni forces and the USA in the region, but they have so far refused to engage ISIS or help fight the Shiite goals. This can only further alienate them from their fellow Sunni governments in the Mideast. Turkey’s President Erdogan will be visiting US President Trump at the White House soon, and he may receive an earful from President Trump about the need for Turkey to start helping its natural allies in the region.

It gets worse for Turkey. Erdogan has also made repeated threats against European nations. Erdogan has threatened the EU nations that he will unleash a new torrent of perhaps millions of more Islamic immigrants into Europe via Turkey if they do not do what he wants (tenth link, eleventh link and twelfth link). Given that the European nations are already overwhelmed with Muslim immigrants and EU nations are beginning to take unilateral action to protect themselves from more Islamic immigrants, this can only further alienate all of the EU nations against Turkey as long as Erdogan is president. Erdogan’s recent animus was especially strong against the Netherlands.

The final link reports that Erdogan is also further alienating the Israelis in his recent insults against Israel and his call for Muslims to pour into the Temple Mount region of Jerusalem. I truly do not understand Erdogan’s policies, but their inevitable result seems to be isolating Turkey from all its previous allies and possible friends.

As readers can see, the situation in the Mideast could turn into a larger war fairly rapidly. Also, if Erdogan unleashes another tidal wave of Islamic immigrants into Europe, Europe may stop taking this “lying down.” Indeed, unless the EU and the European national governments react strongly to Erdogan’s threatened actions, the populist wave inside Europe will surely get stronger and more governments inside the EU may fall or more nations may move to leave the EU, as the United Kingdom has already done.

Sometimes I think most Americans are living in a “fools paradise,” clueless to the real extent of the dangers that are growing more numerous and intense around the world. The American media is mostly still trying to undermine President Trump in its coverage, and they pay little attention to the really important matters pertaining to world news.

Paul was “spot on” in his prophecy in II Timothy 3:1 that “perilous times” would come upon the world in the latter days. We are living in those times. If any readers need  convincing on that assertion, I invite them to read my article, Are We Living in the Biblical Latter Days? I think it is safe to say that in our latter day period of time, things are going to get worse before they get better.