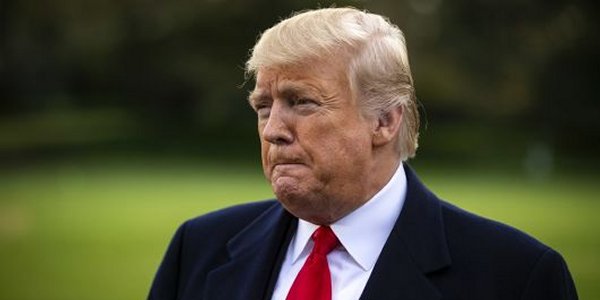 As the British House of Commons prepares to vote on Prime Minister Teresa May’s proposed Brexit deal as early as next week, President Trump recently cast doubt on whether the United Kingdom will even be in a position to negotiate a bilateral trade deal with the US if May’s Brexit deal passes. The first link offers details about Trump’s statement, and it also includes denials from May’s government that the UK would be prevented from negotiating independent trade deals under May’s proposal.

As I understand it, Trump’s comments were based on his judgment that if May’s Brexit deal passes a Commons vote, the post-Brexit UK government may lack sufficient national sovereignty to negotiate with other sovereign governments around the world. Trump has a good point. As I understand it, May’s Brexit deal would result in the UK no longer have any say about the making of EU rules even though many EU rules would remain in force within the UK. If that is true (and I think it is), the United Kingdom would become little more than a colony of the EU. It would subject itself to EU rules even though the UK would no longer have any vote within the EU itself. This would be a situation far worse than the status quo, where EU rules are in effect within the UK but the UK does have a say over the making of EU rules. From my vantage point on the American side of the Atlantic Ocean, the long, independent sovereignty of the British people will be all but over if the House of Commons approves May’s surrender deal. It is widely reported that her deal is so unpopular that it is not likely to pass. I hope that proves to be the case.

Trump’s observation is based on the fact that in a state of subjection to the EU, the UK may have to obtain EU approval to negotiate a deal with the USA (or any other nation) and the EU may also claim that it must approve any post-Brexit, US-UK trade deal because such a deal would have an effect on EU rules within the UK. Who would decide if that is the case? If the UK remains voluntarily subject to EU rules but is not a member of the EU, it would seem that the European Court of Justice (the EU “Supreme Court”) could assert authority over all British government actions and decisions, and that the House of Commons would have little remaining authority over the United Kingdom. If May’s deal passes the House of Commons, it may render the House of Commons all but irrelevant within the UK and the ultimate authority over the British people will pass from London to Brussels.

The second link, from the British media, cites two former high-ranking British officials as supporting President Trump’s appraisal of the shrunken state of sovereignty the UK would have if May’s deal is approved. It cites both Sir Andrew Cohn, former British Trade Secretary, and Sir Michael Fallon, former British Defense Secretary, as sharing President Trump’s doubts about the UK’s freedom to negotiate trade deals with other sovereign nations if May’s deal is approved. The UK’s ability to negotiate bilateral trade deals after Brexit is critical to the UK’s economy. Other nations are ready to negotiate such deals (see the third link), but it isn’t clearly legally defined what authority the UK will retain over its own nation in the deal offered by May to the House of Commons. Her deal so diminishes British sovereignty and so empowers the EU over internal British affairs that it is not impossible that the EU, at some future point, may appoint a kind of “Viceroy” to administer the UK after May’s deal surrenders much sovereignty to the EU in Brussels. My previous post discussed German Chancellor Merkel’s demand that nations must surrender their sovereignty to globalist entities such as the EU. One obvious consequence of surrendering national sovereignty to a globalist power is that control over national military forces will eventually be transferred to globalist entitles like the EU. If May’s Brexit deal is passed by the House of Commons, I wonder how long it will be until the UK is ordered by Brussels to surrender control of its nuclear weapons to EU generals. If May’s deal passes, then the UK will be subject to many EU rules and jurisdictions, but it would retain no voting rights within the EU itself. The UK would, therefore, clearly be the least sovereign of any nation within the EU. How can it assert the right to control its nuclear weapons and military forces any longer if it has yielded its ultimate sovereignty to the EU?

Those who have read my books, articles, and blog know that the British people are the descendants of the ancient Israelite tribe of Ephraim and that the USA is the modern nation formed by the descendants of the Israelite tribe of Manasseh. This used to be understood by many within Victorian England, but this knowledge has largely faded from modern awareness. However, it is still probably true. God originally gave a “birthright” promise to Abraham and promised he would be the father of many nations (Genesis 17:1-7). This birthright blessing was passed via Isaac and Jacob (renamed “Israel”) to the sons of Joseph, named Ephraim and Manasseh (Genesis 48:14-49:2, 22-26). Jacob/Israel prophesied that they would grow into large nations (“a multitude”) and that, specifically in the latter days, Ephraim would become a company or multitude of nations and that Manasseh would be one single great nation (Genesis 48:19-49:2). Genesis 21:12 prophesied the birthright descendants of Abraham would be known by the name of Isaac. After the tribes of Israel went into exile in the 8th century BC, they were known by the name of Sacae by the Greeks and Saka by the Persians (both preserved the root word of Isaac in their names). The Romans later called these people the Saxons, the name they have borne ever since. The British and Americans are, indeed, brother nations with a common culture and language, which would be expected of “brother” tribes. The dominance of the British and American nations during the 19th-21st centuries resulted from Divine grace: they were given the “birthright” blessings just as the Bible prophesied. The Bible has many pieces of evidence confirming these national origins as does secular history. One biblical clue about the tribe of Ephraim is very specific to the modern British people. Judges 12 records a narrative about a war between the Ephraimites and Manassehites. They looked so alike that the victorious Manassehites relied on one key genetic trait of the Ephraimite tribe; the Ephraimites “dropped their h’s” in conversation. In the modern world, no people are so known for their genetic trait of dropping their h’s as are the British people. This is so well-known that the musical, My Fair Lady, included it in its content. The DNA doesn’t lie. The modern Ephraimites still “drop their h’s.”

Much of the envy of the world toward the British and American nations is actually, an envy of the divine birthright these nations have inherited. Teresa May seems poised to surrender the birthright of the British people to the EU. If the British surrender it, they may never get it back in this age. Esau (Edom) originally had the birthright blessing from Abraham, but he sold it to Jacob/Israel for a bowl of soup (Genesis 25:29-34) and never got it back (Genesis 27). At least Esau got a bowl of hot soup when he sold his birthright. Teresa May seems ready to give away the British birthright for nothing in return! I very much hope that this does not occur, but it will if the British House of Commons votes to approve May’s surrender deal to the EU. We should not have much longer to wait to see if it does occur.

For more detailed information about the Israelite tribes of Ephraim and Manasseh, I urge you to read the full documentation in my books (available at the homepage of this website). Some information is available in my free articles, The Tribe of Joseph and the “Latter Days,” Are We Living in the Biblical Latter Days and The USA in Biblical Prophecy.