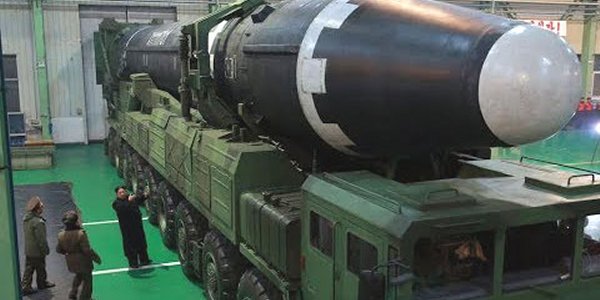 This post is to be sure that all readers of my blog are aware of credible media reports that the American CIA has warned President Trump that only three months remain before North Korea can hit US cities with nuclear weapons. [Please read that sentence again and let the gravity of it really sink in.] The first link and second link offer details about this story which is being reported in the media in many nations. The third link offers a web-search menu for you to check out many other sources affirming this story. Based on its wide circulation and the credibility of those releasing the report, it seems to me that this is an “official” leak that is being given to the general public at this time to prepare it for imminent war if no radical breakthrough that would “denuclearize” the Korean Peninsula occurs.

In related news, Senator Lindsay Graham has urged that the dependents of US military personnel in South Korea should be be evacuated due to the serious danger of war in Korea (fourth link). This is a step that is often taken just before an impending war begins. I agree with Senator Graham that this action should be taken. Indeed, it is my view that this should have been done some time ago. North Korea is openly boasting that its new missiles can reach all the USA’s mainland (fifth link). The sixth link reveals how deadly a North Korean nuclear attack could be if it detonates an EMP blast high over America and “fries” our entire national electric grid. Are you prepared to live for years without any electricity? Few people are, but they are the ones who will most likely survive if an EMP attack does occur. American leaders inexplicably (in my view) continue to shrink from a necessary preemptive strike vs. North Korea to eliminate any possibility of it being able to hit the USA with a nuclear strike. At least Hawaii (within easy range of North Korean missiles) is taking the threat seriously and is again activating its nuclear attack public alarm system (seventh link).

The threat of nuclear war is real, and the USA must launch a preemptive strike against North Korea to prevent the USA being held a nuclear hostage of North Korea throughout future years. If we delay too long, North Korea will make aggressive threats to the USA such as: “Withdraw all your troops from South Korea and Japan and surrender those nations to our rule or we will launch nuclear weapons at a variety of US cities.” Such an unthinkable scenario may be only about three months away if the USA dilly-dallies much longer. Sanctions and diplomacy have proven to be total failures in accomplishing the goal of denuclearizing North Korea. There seems to be very little likelihood those efforts will disarm North Korea of its nuclear weapons this late in the game. Indeed, North Korea is evidently in an apparent head-long rush to gets its nuclear weapons deliverable on missiles before the USA launches a preemptive strike to stop it. The only realistic action still available to the USA, Japan and South Korea is a pre-emptive strike vs. all of North Korea’s nuclear and missile facilities. The sooner the leaders of these nations realize this stark reality the better. If the USA does not launch a preemptive strike to protect itself and its allies, North Korea may launch the first strike itself as soon as it is able to do so.

Matthew 24:6 warned that a rising crescendo of “wars and rumors of wars” will characterize the time just prior to the return of Jesus Christ. We are living in these biblically prophetic times–called the “latter days” in many biblical passages. For those who need evidence that this biblically-prophesied time is upon us, please read my article, Are We Living in the Biblical Latter Days? The CIA report indicates that there may only be three months left before war is imminent. Three months is a very short time. If war will be imminent in three months, it is fair to say that it is already imminent now. I urge readers to make necessary preparations for such an eventuality by reading my article, Should Christians Prepare for Future Hard Times?