Trump to UN: USA May Have to Destroy North Korea…as Pieces Move into Place 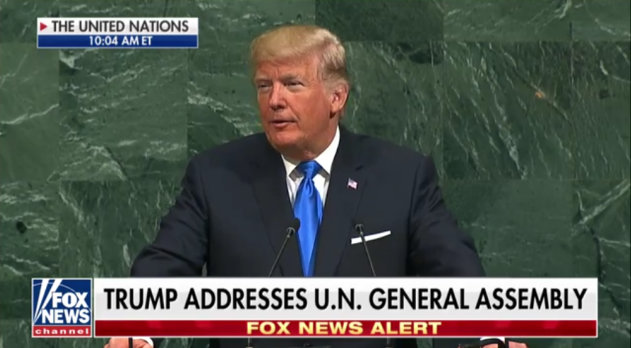 President Trump, in an address to the UN, gave a very candid statement and warning to that international body. He said that the nuclear threat from North Korea is reaching a point where the USA will have “no choice but to destroy North Korea.” He disdained North Korean leader, Kim Jong Un as “Rocket Man,” and added that he is on a “suicide mission” by pursuing a nuclear attack program against the USA (first link). Strong words, and I don’t think that President Trump is bluffing. As readers surely know, North Korea has been on an accelerating pace to attack the USA and/or its allies with nuclear-tipped missiles. It has demonstrated that it has ICBMs which can reach the US mainland (its missiles can easily attack Guam as its recent missile test confirmed), it has exploded a hydrogen bomb, it has tested submarine-launched ballistic missiles and needs only to be able to place nuclear warheads on its ICBMs to attack the USA with nuclear weapons. It has also stated its intention to “sink Japan.” I think this is the closest the world has been to a nuclear war since the Cuban Missile Crisis of 1962.

One of North Korea’s previous tests was said to have had a warhead which disintegrated into several pieces in the air, and this was deemed a sign of failure. I suggest the opposite may be true. If North Korea is planning on attacking the USA with nuclear warheads designed to explode as EMP weapons to “fry” America’s electric and electronic infrastructures, that missile’s warhead would need to explode or come apart in the air high above the surface of the earth. That is what the North Korean missile test warhead apparently did. North Korea will do far more damage to the USA if it explodes a primitive nuclear warhead high in the air over the USA than if it impacts on a single US city. An EMP blast could devastate a hundred cities instead of just one US city. If readers have not read the book, One Second After, by William Forstchen (which describes the catastrophic effects of just a few EMP blasts over the US mainland), I urge you to do so.

I’m sure that President Trump realizes all the above risks. He cannot wait too long to order a pre-emptive strike against North Korea to stop a nuclear or nuclear/EMP attack against the USA. If he waits too long, disaster is very possible for the USA.

As this crisis heads toward a peaceful removal of nuclear weapons from the North Korean regime (which seems unlikely) or a pre-emptive attack by the USA and its allies against North Korea (which seems more likely as of this writing), some pieces are falling into place to prepare for the military option. The USA already has a lot of military air and naval assets in the region to take out North Korea’s nuclear and missile programs. B-2s can be flown from the mainland USA as well. US submarines are surely in position to launch cruise or ballistic missiles at North Korea if ordered to do so. Also, I’ve noticed one other development which, while unpublicized, may indicate further preparations for an attack are underway. The USA days ago launched into orbit its X-37B orbital space platform which is operated by the US Air Force and can stay aloft for over two years on a single mission as it is unmanned (second link). It looks like a miniature space shuttle, and its weapons capabilities are a secret. However, since it is entirely operated by the US Pentagon as a military project, I believe it is a military platform and almost surely has both offensive and defensive weaponry. It operates in earth orbit, and it would serve as an ideal platform for destroying dozens or hundreds of enemy satellites in space. It could also have weaponry which could destroy or disable ICBMs during their flight trajectories toward the USA–this would be extremely appropriate for the North Korean threat. It may also have space-to-ground weaponry as well. It could also have communications equipment on board to quickly re-establish GPS services to US military and civilian usages if an enemy destroyed or disabled America’s GPS satellites–which are essential for many modern communications and military targeting purposes. No one really knows for sure what it can do, but I’m sure it is not a test vehicle to see how well robots play dominoes in space. The third link adds a history of what is known about the X-37B program. I do think it is significant that the E-37B space vehicle was just recently put back into space orbit as the North Korean crisis has escalated toward a decision point.

Another development argues we are reaching a termination point for this crisis. Japan has moved into place an advanced air defense system in its northern home island of Hokkaido, over which North Korea has fired two ballistic missiles–setting off air raid sirens and warnings to Japanese citizens in the region under the missiles’ paths (fourth link). Firing military ballistic missiles over a nation is an act of war in itself. Japan has every right to shoot down any more North Korean missiles which are fired over its sovereign territory. Indeed, I think it will appear to all to be weak if it does not do so.

Those who have read my articles and blog for some time know that the Bible’s prophecy in Ezekiel 38-39 foretells that a great World War III will erupt at the end of this age just prior to decisive divine intervention in man’s affairs. That prophecy is about the final great war between two great global alliances. The Gog-Magog alliance is clearly identified as Russia, China, Iran, etc. The other is identified in my writings as the modern NATO/western nations and their Asian allies. The prophecy in Ezekiel 38 does not address any regional or proxy wars which will have occurred between members of these rival alliances prior to the final great global world war. Such preliminary or proxy wars are quite likely. North Korea is China’s ally, so it is part of the Gog-Magog alliance. By threatening the USA, the leader of the western alliance, North Korea is, indeed, on a suicide mission. To gain insights into the above biblical identifications, please read my articles, What Ezekiel 38-39 Reveal about a Future World War III, Japan’s Role in Biblical Prophecy, and The USA in Bible Prophecy.

President Trump is in a very difficult position. If he acts in time to stop a nuclear attack by North Korea, he risks criticism both at home and abroad…but he will have saved the USA from a terrible destruction. If he waits too long and North Korea successfully attacks the USA, he will face terrible domestic and foreign condemnation and go down in history as the greatest fool to ever lead the USA. I think it is obvious which choice is the one which must be made. Indeed, if I were in his position, I would now be making final preparations for the pre-emptive attack which North Korea has forced upon the USA.