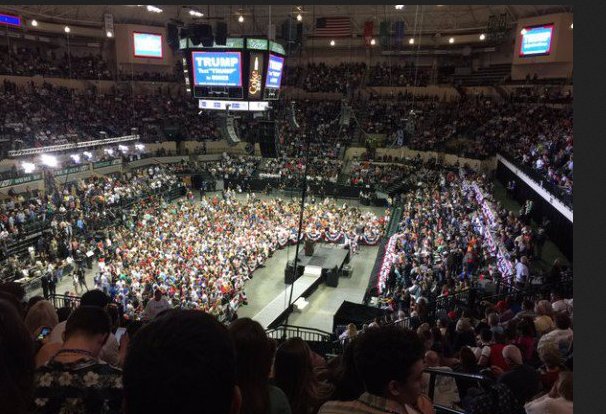 Some readers may wonder why I’m placing an update on the American presidential race on this blog, but I think there are strong reasons to do so. The USA is the world’s leading nation at present, and the entire globe will be affected, positively or negatively, by who becomes the next US president.

As readers know, I believe we are living in the latter days of our age, and many biblical prophecies address our times. We can understand some of what the Bible says will happen in the latter days, but many aspects of latter days prophecies will be determined by the Creator himself. God is utterly sovereign. No one can make him do anything, and no one stop him from doing what he chooses to do (Daniel 4:35). In Isaiah 41:21-26 and 46:9-11, God declares firmly that he will fulfill his prophecies, and that his ability to do so proves that he is the only God and Creator with the power to control world events. It is my view that while God will fulfill his prophecies, he can do so in a variety of ways. He can do it “the hard way” if people are intransigent; he can do it “the easy way” if his (or any) people humble themselves before him, and he can do it any number of ways in between those two extremes. Never forget that prayers can move God to change the course of nations (Exodus 32, Amos 7:1-6, James 5:17). The USA is at a critical junction. After many years of foolish, dissolute and very bad government policies, the USA is teetering on the edge of a major collapse in so many ways, in my view.

If Hillary Clinton is elected, I expect the USA will go over the abyss and the USA will become a steadily more difficult place in which Christians can live.  If  Donald Trump is elected, he will restore simple, common-sense approaches to many USA policies and Christians will be much better off.  America has so many problems “baked in the cake” that difficult times lie ahead on many fronts, but I do believe Donald Trump wants to fix as many of the problems as he can for the good of the nation. Based on Hillary Clinton’s dreadful foreign policies as Secretary of State and the depths of corruption that are being revealed in the unfolding email (and other) scandals, it is my belief that she will govern for her own benefit and not for the good of the nation. Readers are familiar with the many revelations now coming out in media stories all over the world which are reporting the seemingly-endless Clinton scandals being revealed by Wikileaks. This post will not attempt to duplicate all their efforts. This post is to update readers on what now appears to be the current state of this presidential campaign.

In the view of many political observers, Hillary Clinton was in so large a lead that the race was over. The polls sponsored by big media corporations owned by far-left corporations (ABC, NBC, CBS, CNN, MSNBC, Washington Post, New York Times, etc.) had Hillary in a big lead just a week or two ago. However, as her scandals become widely known, her lead has vanished and Trump has been surging in the polls. The LA Times national poll now has Trump up by almost 4 points (first link). The ABC poll, which had Clinton up by 12 points on October 23rd showed Trump leading by one point on October 30th (second link). That is incredible! This poll is sponsored by the far-left ABC network and the Washington  Post, but it shows Donald Trump has increased his share of the vote by 13% in one week! The third link reports Clinton’s sour grapes response to this radical “poll shift.” However, the Investors Business Daily tracking poll still has Clinton clinging to a 1 point lead after being ahead by 4 points (fourth link). The fifth link mentions the huge shift in the ABC poll, and adds that Trump has now pulled into a lead in the usually Democratic state of Hew Hampshire by 2 points and has pulled to within 2-3 points in Pennsylvania (previous polls I’ve seen had Trump behind by as many as 10 points). A poll in my neighboring state of Minnesota had Trump behind by only 2 points (within the margin of error) in a very strong Democratic state. In the battleground state of Colorado, the most recent poll has Trump within 1 point of Clinton even though an earlier poll in October showed him behind by 10 points (sixth link). [The sixth link is a case in point about the weakness of averaging a number of polls over a 3-4 week period. That approach does even out “outlier” polls, but when a major tectonic shift occurs in a campaign–as has in this one due to Clinton’s scandals-it gives far too much weight to polls taken before the major scandals broke.] The seventh link shows Trump with a 4 point lead in Florida while the eighth link shows a 4 point lead by Trump in Ohio and a 1 and 2 point deficits in North Carolina and Nevada, respectively. Clearly, the election is now very close, but the momentum is obviously in Trump’s favor.

How bad are the Clinton scandals getting? The ninth link reports that CNN commentator, Donna Brazile, has been dismissed from CNN after it was learned that “she showed questions for CNN-sponsored candidate events in advance with friends on Hillary Clinton’s campaign.” This revelation also makes this a media scandal as it confirms what many have long suspected–that the media was actively engaged in helping the Clinton campaign behind closed doors. The tenth link reveals that a Justice Department official was once a lawyer who kept Clinton Campaign Chairman, John Podesta, “out of jail.” Long-time Clinton functionary, Terry McCauliffe (who is now governor of Virginia), is now implicated in a scandal involving large sums of money, some of which was funneled to a woman who is the wife of (guess who?) a current Deputy Director of the FBI under Director James Comey (eleventh link). Do you think this is just a coincidence? Do you also think it is just a coincidence that Bill Clinton, Hillary’s husband, met covertly with the head of the Justice Department, Loretta Lynch, in a private airport tryst (that obviously wasn’t supposed to be known to the public) just before the FBI made a decision to not prosecute Hillary Clinton this summer? This hardly seems coincidental because the FBI reports to the Department of Justice.  The Clinton scandals are now exposing high officials in the federal and state governments of helping Hillary Clinton in corrupt ways. No wonder the polls are changing so fast.

There is now a real possibility that Donald Trump will be elected president, given the momentum shift in his direction. The twelfth link has a map offering an assessment by Real Clear Politics regarding its best guess concerning the outcome in the Electoral College vote. It shows Clinton with 294 Electoral votes and Trump with 244 Electoral votes. However, this map does not take into account the most recent polls. For example, it shows New Hampshire in the Clinton column even though the most recent poll has Trump in the lead. In my opinion, I think if the election were held today, Trump would win not only New Hampshire, but Colorado, North Carolina, Nevada and one congressional district in Maine. Those states, plus the ones shown in the eleventh link’s map would give Trump 279 Electoral votes, more than the 270 needed to win the election. If more and more scandals about the Clintons keep emerging, the Democratic base will be so deflated that Trump may win in a much larger manner. I make no predictions yet, but that is how it looks as of the writing of this post.

For the sake of our nation, I hope Trump wins. He is not a perfect candidate, to be sure, but he is far better than Hillary Clinton who may try to govern by executive orders as if she were a Queen if she gets elected.

I pray regularly that God will give the victory to Trump, and I ask him to do so “for his name’s sake.” Remember the two aforementioned prophecies in Isaiah that God will always be sure to implement his prophecies? In my view, there are two biblical prophecies that could well fail if Clinton is elected president. Genesis 49:22-26 prophesies that in the latter days, the tribe of Joseph will have the birthright blessings promised under the Abrahamic covenant. The sons of Joseph were Ephraim and Manasseh, who each became a tribe of Israel. My books trace their descendants to being the British nations and the USA, with the British nations being Ephraim and the USA being Manasseh. If Hillary Clinton is elected and continues Obama’s policies, the nation’s finances and economy will almost surely collapse, defeating the prophecy of Genesis 49:22-26–which does not even hint that Joseph’s tribes will lose the birthright in the latter days. Also, Ezekiel 38-39 is the famous prophecy about the Gog-Magog alliance attacking the modern nations of the ten tribes of Israel and their allies in the latter days. The USA (Manasseh) is the leading nation of the modern ten tribes of Israel that would be attacked by an army coming out of the north (Ezekiel 38:15). Ezekiel 38:21 cites God calling “for a sword” against the invaders. In other words, God tells the attacked Israelites to grab their weapons and fight back. To do so, the Israelites being attacked must have ready access to personal weapons and lots of ammunition. Hillary Clinton’s stated desire to either stop gun sales to Americans or confiscate them (in spite of the fact she cannot do so under the USA’s Second Constitutional Amendment) would leave Americans unable to fight back and fulfill God’s prophecy.  Donald Trump supports the Second Amendment and his election would be more in harmony with Ezekiel 38:21. Trump’s stated positions are within God’s will, so I pray for his election.

We will soon see the final outcome of the campaign, and we will know if God’s latter day prophecies will be fulfilled via “the hard way” or via a better way for America and the western world. I think readers understand my preference in the race.