Trump Is Right: Most NATO Nations Are Slackers in Defense Spending 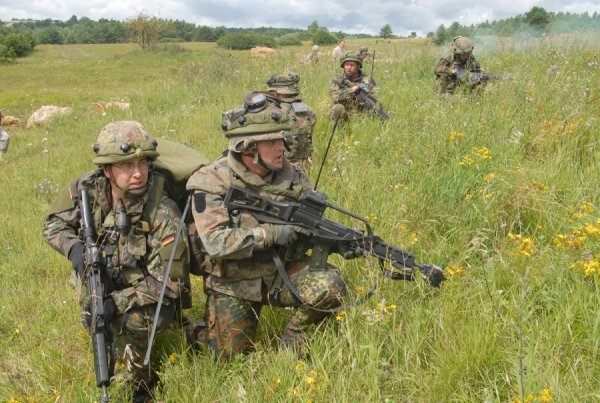 During the US presidential campaign, then-candidate Donald Trump observed that most NATO nations were not carrying their weight when it came to defense spending within the NATO alliance. He was entirely correct. Indeed, the lack of meaningful defense spending by NATO nations in Europe is breathtaking, as this post will document. The primary economic power in Europe, Germany, is an oft-cited example of the refusal by Europe’s NATO nations to spend at least 2% of their respective GNPs on national defense purposes. The first link and second link are reports about the unwillingness of Germany to spend its necessary percentage of GNP to support NATO defenses. Germany is giving some lip-service to doing better, but there are no actions yet that indicate any meaningful progress. Indeed, the German government states it might meet its goal by 2024, which coincidentally is the year that Trump’s presidency would end, assuming he wins two terms in office. So, in other words,Germany is reneging on its commitment to spend 2% of its GNP on defense spending, and likely plans to ignore it after 2024 as well.

Most other nations in NATO are just as derelict in refusing to spend any meaningful money to defend themselves against attack. The third link has a graph comparing each NATO nation’s spending on defense purposes as a percentage of their national GNP. Notice that the USA spends a far higher percentage of its GNP on defense needs, but no other nation spends anywhere close to what the USA spends. There are many nations who spend about only 1% of their GNP budget on defense purposes (or less). This means they are spending approximately half of what they should be spending. Let’s name the worst offenders, based on 2015 spending levels. The worst offenders (in order of deficient spending on the chart) are Luxembourg, Spain, Hungary, Belgium, Canada, Slovenia, the Slovakia, Latvia, Italy, the Czech Republic and Lithuania. It is possible that some incremental changes have occurred since then, but all reports I’ve seen indicate that only the USA, the UK, Greece, Estonia and Poland are meeting their 2% spending commitment.

Let’s make a few observations about this data. Seriously–Latvia and Lithuania live that close to Russia and they aren’t even meeting the minimum NATO requirement for defending themselves? At least Estonia is taking its own defense seriously. One salient fact leaps out at me in this chart. Greece (!) is meeting its 2% minimum spending requirement even though Greece is essentially bankrupt and is in a state of de-facto receivership by the EU and the IMF! If a virtually bankrupt nation like Greece is meeting its NATO commitment, the other nations are utterly without excuse for their dereliction in not seeing to their own defense. They are clearly “slackers” and have been for some time. I suspect that one reason for the chronic underspending by NATO nations on defense purposes is that previous US presidents either didn’t care about them neglecting their defenses or they didn’t have the  intestinal fortitude to publicize this fact. President Trump has made it clear that he expects to see results in NATO nations boosting their defense spending dramatically to get to their minimum pledged amount of GNP spending. I look forward to seeing what each NATO nation’s defense spending will be in their 2017 national budgets. I have little doubt Trump will publicize those figures and “out” the major offending nations.

Let’s be brutally honest. The American citizens are war-weary from endless wars in Afghanistan and Iraq as well as in Syria (at present) and in Yemen (in the past). The USA was also bombing targets inside Pakistan with remotely-piloted drones for years. If Russia decided to invade Europe, the European nations would plead for the USA to come rescue them. Given that the USA is war-weary and the NATO nations have a longstanding record of not caring much about their own collective defense, why should the USA respond to any such pleadings? The USA has problems of its own. It has spent an amazing amount of money in the Mideast on the endless “war on terrorism,” but each year it has surprisingly little in the way of any new weaponry to show for such huge spending. Where is it all going? The USA also has to stop spending defense dollars on “feel good” projects, social-engineering efforts, “waste, fraud and abuse,” and pork barrel spending that congressional representatives direct to home-state contractors that really does little or nothing to enhance national defense.

Even if a NATO nation meets its 2% spending GNP percentage, that is no guarantee that it is spending its money wisely. The USA has spent trillions and has very little to show for it. I believe Trump will address that problem with great zeal. Let’s look at the United Kingdom, a nation which reportedly meets its 2% spending pledge. The fourth link reports all seven of the British nuclear attack submarines have been taken out of service due to maintenance unreliabilities. The fifth link reports that some modern British warships are so noisy that a Russian sub can detect them 100 miles away! [What are they doing? Pounding out Beatles albums at maximum volume levels into the ocean?] How can such such a blatant design error exist? Have the British not heard of stealth technology yet? As if this is not enough, the sixth link reveals that the British have been busily destroying their own military weaponry instead of preserving it and building more. Oh yes..the fourth link also reported that the UK’s “Type 45 destroyers …break down in hot weather.” Who has been running the British defense department and industries? Monty Python? The UK is a prime example that a nation can spend 2% of its national GNP on defense and still be a serious”slacker” when it comes to national defense.

I can’t resist one more comment of how abysmal the state of military forces are in NATO. At the bottom of the second link, there is a comment that Germany is showing progress because a “Franco-German joint fleet of transports…[can fly]…450 soldiers to Lithuania” as part of a NATO exercise. This is a sign of progress? It takes the combined air transports of the German and French air forces to be able to fly a paltry 450 soldiers to Lithuania? If their military airlift capacities are so atrophied that France and Germany had to combine their military airplanes to fly just 450 troops to Lithuania, why didn’t they just charter a Lufthansa Boeing 747?

These are not irrelevant matters. The future existence of European nations depends on their national defense, and current military efforts by the European NATO nations amount to mere tokenism at best. Indeed, it looks like they have already decided in advance to surrender in the next war. And the next war is going to be a doozy!

The fulfillments of many biblical prophecies indicate that we are living in what the Bible calls the “latter days.” Those Christians who seriously study biblical prophecy can see this fact easily. Much evidence that this is true is found in my article, Are We Living in the Biblical Latter Days? Ezekiel 38-39 reveal that a major world war will be fought at the end of this latter day period at the climax of our age (38:8 and 16). Jesus Christ prophesied it would be so destructive that unless his return intervened to stop it, no flesh would survive it (Matthew 24:21-22). Given today’s weapons of mass destruction, that prophecy warns of a danger that can literally come true. Ezekiel 38-39 makes it clear that an alliance including Russia, China, Iran and many other nations will invade the lands and peoples of the “house of Israel” (39:21, 22-23, 25) in the latter days. The “house of Israel” means not the modern Jewish nation called by that name [the Bible calls it “Judah” as in Zephaniah 2 and Zechariah 12 and 14], but rather the modern nations descended from the biblical ten tribes of Israel. As my books and audio messages make clear, they include many of the modern nations of NATO combined with Australia, New Zealand, etc. My article, The USA in Biblical Prophecy, offers a small sampling of the evidence available in my books on this topic. Any person familiar with the Bible knows that Genesis 49 and Revelation 7 prophesy that there will be nations descended from the ten tribes on the earth in the latter days. They were never prophesied to “get lost”‘ or “die out.” Indeed, Hosea 1 expresses God’s anger at the ancient kingdom of the ten tribes of Israel for their chronic sins, but verse 10 prophesies that God would make them exceedingly larger and more numerous after their ancient captivity began.  If you have not yet done so, I urge you to read my article, What Ezekiel 38-39 Reveal about a Future World War III, to see how global and vast this final world war will be. As that article makes clear, Ezekiel 38-39 actually reveals that Europe and North America will be primary battlegrounds in that future war. As these links argue, NATO’s nations are stunningly unprepared for this future event.