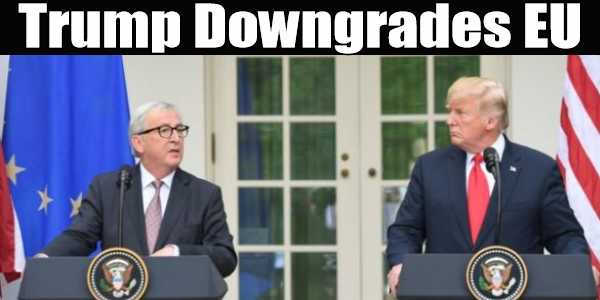 Something important has happened, the importance of which the American media has overlooked. A few days ago, the US government downgraded the diplomatic status of the EU “Ambassador” in Washington, DC. from that equal to a nation-state to a lesser status. It is a symbolic gesture, but it has very real significance.

Previously the Ambassador to the USA from the EU was given a status equal to ambassadors from actual nation-states. The Trump administration has just downgraded the EU’s ambassador from nation-state status to that of an “International organization.” On the face of it, this would not seem to be all that noteworthy as the EU is not a nation-state and is, in fact, an international organization. This means the US action simply acknowledges the reality of the EU’s real status in the world. However, the EU intensely wants to be regarded as a pan-European, political entity which is the equal of actual nation states so this downgrade is immensely important from a diplomatic point of view. It clearly means the USA no longer regards the EU as speaking for Europe, and that henceforth, American relations with European nations will be conducted on a bilateral basis with each European nation–not via the EU. The first link, second link and third link, from British and German media sources, report the EU is very upset about this downgrade and that it is particularly upset that the Trump administration did it without any prior notification to the EU. I think the EU is especially upset because if it had received prior notification, the EU would have mobilized fellow globalists all over the USA to try to head off the downgrade. By downgrading the EU’s diplomatic status without notification, Trump presented the EU’s globalists with a fait accompli about which they could do nothing.

This action highlights the deep struggle occurring between the globalists and nationalists all across the world. The globalists (who favor international governments presiding over the nations) thought that they were having everything their way in the march of history in recent decades until the Brexit vote in the United Kingdom and the election of Donald Trump as US President brought their agendas to a screeching halt. Since then, nationalists have been rising all over Europe and globalists have been in steady retreat. Poland, Italy, Hungary, and Austria have elected nationalist governments, much to the chagrin of the EU globalists. Germany had a nationalist party enter the German parliament for the first time since World War II after Germany’s most recent election, and Sweden also saw its first nationalist party obtain sufficient representation in Sweden’s parliament that the other parties have been unable to form a government. France’s embattled globalist leader, Emmanuel Macron, is struggling to survive in office due to the fierce national opposition coalescing around the “yellow vest” revolt in his nation. In Germany, the party of globalist leader, Angela Merkel, performed so badly in regional elections even as the rightist German party gained significantly that she had to resign the leadership of her own political party in order to retain her position as Chancellor. In both France and the Netherlands, there are strong nationalist parties that could take power after the next national elections in those nations.

Last year, I did a post (fourth link) about the 2018 G-7 meetings in which the EU’s leaders “crashed” the G-7 meeting held in Canada. The G-7 meetings are technically scheduled to enable the elected leaders of seven major democracies to interact on an annual basis. However, the two top EU leaders were in attendance, even though the EU is not a nation state, is not a democracy and its two leaders are not elected by the citizens of any nation to any post. They were there to create a visual impression that the EU is, an “equal” to the major nation-states. Canada, which is governed by globalists, hosted the G-7 meeting and allowed them to come. I checked to see where the 2019 G-7 meeting will be held and learned it will be hosted by France (fifth link). Since France is governed by globalists, I would expect the EU leaders would again be allowed to crash the G-7 meetings, which is supposed to be for the elected leaders of major democracies. However, the EU leaders really do not merit inclusion in the G-7 meetings. Given the downgrade of the EU diplomatic status by the USA, I suspect that if the USA was hosting the G-7 meeting in 2019, that the EU leaders would not have been invited by President Trump to attend, as Trump is in the nationalist camp.

No doubt, the EU leadership is seething in Brussels over the American downgrade of the EU to that of “merely” an international organization. The EU leaders have made statements that they want their own military force and dream of the EU heading a European empire (sixth link and seventh link), a goal vehemently opposed by Hungarian Prime Minister Viktor Orban and other European leaders (eighth link). The action by the Trump administration to downgrade the EU’s international status will also give heart to the nationalists in Europe who are becoming increasingly powerful.

These developments have clear ramifications from a biblical prophetic perspective. As I’ve noted in many previous posts, Revelation 17-18 foretell that in the latter days of our age a globalist cabal (called “Babylon the Great”) that dominates the nations will be overthrown by a rival alliance cryptically described as “the seven heads and ten horns” who will usher in a new global political/monetary system called “the beast.” Babylon the Great is revealed to be an incredibly corrupt cabal of insiders from both the public and private sectors (Revelation 18:2-3). In Revelation 17, Babylon the Great is also called “the Great Whore,” and the seven heads of the rival alliance that overthrow the Great Whore are revealed to be “seven mountains on which the woman sits” (emphasis added). In biblical terminology, the word “mountain” often identifies a nation so the “seven heads” that will overthrow the Great Whore/Babylon the Great, could easily be seven nations which “overthrow” the rule of the globalist cabals in democratic elections. The USA, by electing a nationalist leader, Donald Trump, could be one of those nations. Italy, which elected a Euro-skeptic, nationalist government in its most recent election, could be another such nation. Brazil, a major nation in the BRICS group (Brazil, Russia, India, China, and South Africa) has just elected a very nationalist leader, Jair Bolsonaro, to be its next leader (ninth link). He is called “the Trump of the tropics,” and he is a fierce opponent of globalism and political correctness. If the British Brexit process results in a “no deal Brexit,” the United Kingdom would be another nation which “throws off” globalist rulership. If France removes Macron from power and elects the nationalists, it would be the fifth nation to “throw off” globalist rule. Poland, Hungary and Austria have already “thrown off” globalist rule by electing nationalist governments. More European nations may follow their example. It is not yet certain who the “seven heads” will be or which nations (or leaders) will constitute the “ten horns,” but we may be seeing this prophesied process in action already. At some point, a crisis point will be reached and a political/financial/monetary crisis will occur which will complete the overthrow of the globalist, Babylon the Great, system, as Revelation 17-18 foretell. This process may already be unfolding on the world scene in front of our eyes. Time will tell, but the prophecy in Revelation 17-18 will be fulfilled when God wants it to be fulfilled.

We do, indeed, live in very interesting times. For more information about the topics discussed above, I invite you to read my free articles, Is Babylon the Great about to Fall…Ushering in a New Beast System?, Are We Living in the Biblical Latter Days? and The Babylonian Origin of the Modern Banking System.