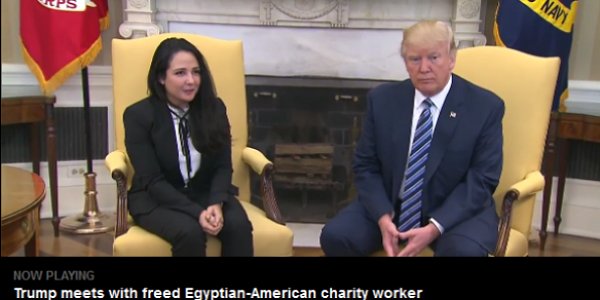 As usual, most of the US media is focused on denigrating President Trump and tends to ignore meaningful foreign news and anything positive about The Trump administration. Something just happened that demonstrates not only Trump’s effectiveness in “the art of the deal” with foreign governments, but it also graphically illustrates the difference between “hard power” and “soft power.”

The Obama administration had favored the radical Islamist Muslim Brotherhood’s efforts to rule Egypt, but that radical group was removed from power by the military under now-Egyptian President al-Sisi. It was bizarre for any American administration to favor a radical Islamist group over moderate Muslim Sunni governments, but that is what the Obama administration did. Given the frosty relations between Obama and al-Sisi, there was little likelihood of success from any effort by the Obama administration to free Ms. Hijazi, if any such effort was made. President Trump has quickly re-established excellent relations between Egypt and the USA (as documented in a previous post), so it was much more likely that Trump’s efforts to free her would succeed. There are five other associates of Ms. Hijazi that are still imprisoned, and it is not clear if any of them are American citizens. If any are American citizens, I expect the Trump administration will work to free them as well.

In a related story (second link), it is reported that the Egyptian government launched air strikes which killed 19 ISIS terrorists, including three ISIS leaders. Not many Americans realize that Egypt is involved with a war against ISIS in its Sinai peninsula. All people desiring an end to ISIS and terrorism applaud Egypt’s success, and the USA and Egypt are allies in this effort.

What might President Trump have been able to offer Egypt in deals between the US and Egyptian governments to facilitate the release of a US citizen? Many things, is the answer. Besides better access to American weaponry, Trump could also authorize release of US satellite photos over the Sinai Peninsula that would help Egypt target the terrorists. He could also offer intelligence that would help Egypt resist the Muslim Brotherhood and firm up support for the effort of Saudi Arabia, Egypt and other Sunni nations to fight the Iranian-backed Houthis in Yemen. Egypt could also offer the USA much intelligence help in locating and fighting Islamic terrorists as well as helping to vet immigrants coming to the USA from Islamic nations. Friendly relations between heads-of-state enables lots of kinds of cooperation.

Now for a brief discussion on “hard power” and “soft power.” Soft power means diplomacy and all kinds of non-violent persuasion. Hard power means the use of military force, and the displayed willingness by a nation to use it. The Obama administration set a “red line” in Syria and then did nothing when the Assad government crossed that line. Obama did nothing to respond to China’s militarizing several islands in the South China Sea, and even strengthened the hand of Shiite Iran in the bizarre nuclear agreement with that nation that looked like a “sell-out” by Obama to the radical Shiites in Iran. Obama did nothing when Russia seized the Crimea, and did nothing when Russia entered the Mideast via Syria. Given such a long record of weakness in its international actions and an unwillingness to use hard power, the Obama administration had very little soft power either. It is a truism that if a nation has no willingness to use its hard power, it will lose much of its soft power as well. The Trump administration has shown that it is willing to use hard power in its missile attack against a Syrian air base used to launch chemical weaponry, its use of a massive MOAB bomb against ISIS terrorists in Afghanistan and its adopting a hard-line vs. the nuclear threats posed by North Korea. As such, the Trump administration has real soft power in international matters because all nations can see the Trump administration will use hard power if necessary.

I can see a biblical prophecy that applies to this situation. Leviticus 26 lists national blessings and cursings that will apply to Covenant nations when they obey or disobey God’s laws. Verse 19 states that God will “break the pride of your power” to nations that disobey him. There is no question that the Obama administration promoted all kinds of national sins and had no “pride in American power” at all. However, the surprise election of Donald Trump as president has reversed the situation. He has manifested a distinct pride in America’s heritage and in America’s power.  Perhaps, just perhaps, God has given the USA a window of mercy in which Divine penalties will be alleviated to give the USA a chance to “get its house in order.”

For abundant documentation that the USA is a biblical Covenant nation, I refer you to my books available at my homepage and the article, The USA in Biblical Prophecy.