TRUE EXTENT OF CHINESE SPYING IN THE USA 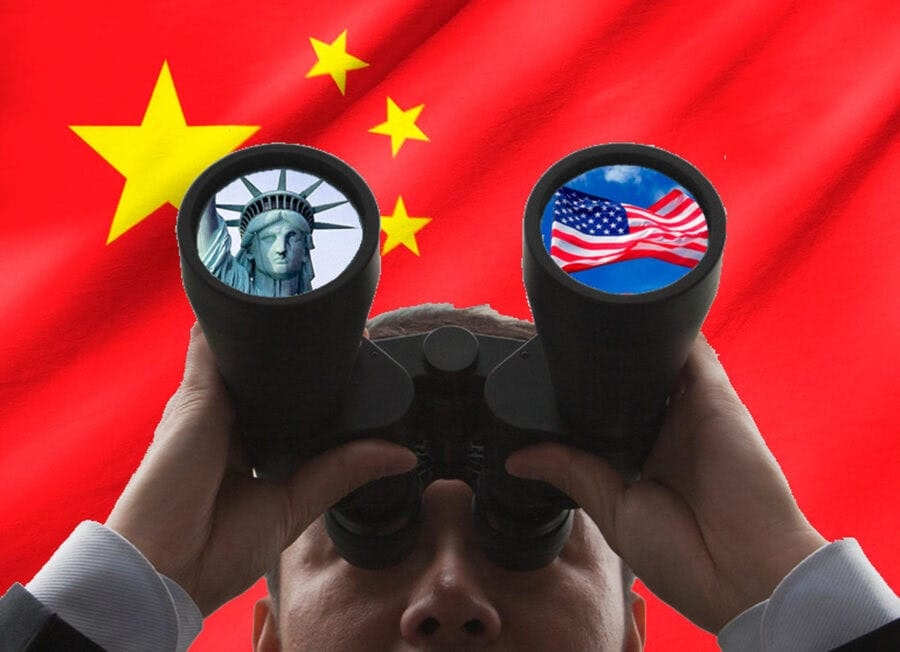 As Russia continues its murderous campaign against the Ukraine and as the Ukraine resists it with steely and admirable resolve, I’d like readers’ attention to be directed to the existential danger posed to the USA by Communist China. Specifically, this post will focus on the extensive spying efforts by China being conducted within the USA.

FBI Director, Christopher Wray, announced recently that he was “shocked” at the level of Chinese spying inside the USA when he became the FBI Director (first link). His statement revealed that the FBI already has over 2000 cases open on Chinese spying efforts and that it opens a new investigation “every 12 hours on average.” The first link documents that China essentially spied on everything inside the USA. Let’s look at just some of the recent known examples of this Chinese spying.

Chinese spying targets both military and civilian entities. The second link reports that a US naval officer was recently jailed after authorities discovered his hidden relationship with Chinese counterparts. The third link details how expansive and bold Chinese intelligence agents are acting on US soil. It states the Chinese Secret Police are actually trying to arrest enemies of the Chinese Communist Party while operating on US soil, and that Chinese agents surveil anti-Communist activities inside the USA. The fourth link gives an example of this fact–reporting that five people were arrested for being involved in the efforts of the Chinese Secret Police “to stalk, spy on and harass US residents critical of Beijing.” Over the years, there have many media articles on Chinese spying efforts directed at US high-tech firms, defense contractors and US infrastructures. Readers who wish to do so can do a web search about such Chinese spying efforts.

In the February, 2020 issue of WIRED magazine is an excellent article that I urge all readers to review in detail–whether on-line or in your local library’s archives copies of this magazine. The article is entitled Inside the Feds’ War on Huawei. It provides extensive information about how China has used its exports of high-tech items, including 5G technology, to build a global spying network. The article notes that “about 40% of the world’s population relies on Huaweii equipment” and that Chinese-exported technologies give China the chance to create “backdoor” into all kinds of digital systems in other nations. Indeed, after reading this article (fifth link), it does seem that China’s goal is to create “kill switches”‘ to disable other nations’ digital systems whenever a future war with China occurs. There is one quote from this article I particular wish to stress. This quote is on page 47 of the print version of the aforementioned WIRED article:

“China [has] recently enacted something called the National Intelligence Law. ‘All organizations and citizens,’ the Chinese law states, ‘shall support, cooperate with, and collaborate with intelligence work (emphasis added).” This is quote ominous. It means all Chinese citizens and entities-wherever they are–must, if asked, become secret agents of the Chinese Communist Party in its spying activities. Given this directive imposed on all Chinese nationals, it means foreign governments–especially the US and NATO governments–must regard every Chinese national within its borders as an actual or potential spy serving the Chinese Communist Party. This would include all Chinese students, visiting professors, diplomats, businessmen, tourists, etc. present in Western nations. Given the obvious Chinese efforts to dominate the South China Sea and build a military force that can defeat the USA and Western nations, it is only logical that all Western nations and/or democracies should severely curtail the ability of any Chinese national to visit or be present in their territories. China will surely use blackmail, threats, etc. to compel any Chinese person to cooperate with the Chinese spying efforts whether they wish to do so or not. Americans of Chinese ancestry would surely be targeted by the Chinese government to serve Chinese interests. In the event of war between China and the USA, all Chinese agents inside the USA could become “sleeper cell” combatants fighting Americans on their own soil.

The US Congress should enact laws which restrict the access of Chinese nationals to US colleges, terrain near US military facilities and bases, critical infrastructures, etc. Given China’s determination to recruit all Chinese persons to serve the spying interests of the Chinese Communist Party, the USA, NATO nations and all democracies need to stop being gullible and take action to remove China’s citizens from being present on their soil without an escort. Similar restrictions were placed on Russian citizens during the Cold War. I recall a US federal employee telling me in the 1970s that Russian citizens were not then allowed in the Twin Cities (where I then worked and lived) without an escort due to the high number of high-tech and defense-related companies in that metro area. Its long past time that US authorities see that China is already waging a new Cold War vs. the USA. I wish the FBI every success in locating and arresting all those who are working as agents of Communist China in any capacity.

I’ll close with one other topic involving China. China has been, no doubt, watching the Russian invasion of the Ukraine with great interest. I suspect the Chinese are just as surprised as the Russians that the Russian military has been far less successful against the Ukrainian military than anyone would have imagined before hostilities began. If Russian attacks vs. the western weaponry possessed by the Ukraine had been easily successful, it would have emboldened China to invade Taiwan as it would think it could enjoy similar success. However, Russian weaponry used against the Ukrainians has been singularly ineffective vs. Western weaponry such as the Javelin anti-tank systems and the latest versions of the Stinger air-defense missiles. This fact is likely causing the Chinese Communists to pause their plans to invade Taiwan. China has huge obstacles to invading Taiwan that Russia did not have in its invasion of the Ukraine. Russia (and Belarus) had long land borders with the Ukraine where huge numbers of tanks could simply drive across the border. China would have to transport its tanks about 100 miles across the Taiwan Strait before any of them could invade any part of Taiwan. However, there is no guarantee that China will delay its invasion. The sixth link contains an analysis of the chances for a Chinese invasion of Taiwan.

There is no question that we are living in the biblically-prophesied “latter days.” For abundant evidence on this claim, please read my article, Are We Living in the Biblical Latter Days? The Bible also prophesies that a great, final World War will occur in our future which will begin when Russia, China, Iran and their allies all attack the entire Western world and their allies at the same time. It will be an age-ending conflagration. For details about the motivation for the war, the main direction of attack, some of the tactics and battlegrounds and how it will end are detailed in my article/research report entitled: What Ezekiel 38-39 Reveal about a Future World War III.