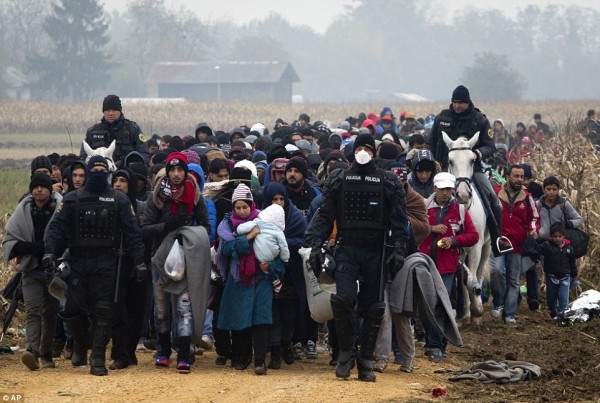 At the very time that US President Obama is trying to take executive actions to impose gun purchasing restrictions on American citizens, a top Swiss General is warning Swiss citizens to arm themselves (with guns) if they don’t have them already. Do not expect to see this major story in the mainstream media, which wants to downplay the dangers of what is happening inside Europe.

The first four links offer varying perspectives on this very ominous warning from the Swiss General. In these links, you will see warnings reported that “society is dangerously close to collapse,” and the “risks of social unrest [in Europe] are soaring.” The reason? The waves of Islamic immigrants that are pouring into Europe. The Islamic immigrants have evidenced, so far, no interest in assimilating into the European civilizations of their host nations. If this attitude continues, the situation inside Europe can only grow more explosive as European citizens will demand that either (A) their governments protect them and/or expel the immigrants or (B) the citizens will elect new leaders who will get the job done. Obviously, the risks of social unrest and internal conflict will be greatest in the European nations who have accepted the most immigrants. The fourth link offers an example of the civil unrest that is beginning. It reports that 90 women were sexually assaulted in Cologne, Germany on New Year’s Eve by “African and Arab men,” and that this kind of attack on European citizens is spreading to other German cities. A wave of anti-Islamic legislation in European nations is entirely predictable. It is noted in these links that Switzerland already forbids mosques and the wearing of burkhas in Switzerland. Those kinds of laws may be implemented in other European nations as the “welcome mat” for Islamic immigrants gets increasingly withdrawn all over Europe.

The final link offers information on which European nations forbid or permit citizens to arm themselves, but it asserts that people are arming themselves legally or illegally due to the growing need for personal protection.

In previous posts, I have periodically cited II Timothy 3:1 in which the Apostle Paul, prophesying regarding the latter days, warns that “perilous times shall come” on the earth. Who would have guessed when the wave of Islamic immigrants from Turkey, Libya, etc. began that that event would so rapidly add to the fulfillment of this prophecy?

My thanks to a reader who sent me one of these links and tipped me off to this story.