Obama and Putin Pressuring Israelis to Give Golan Heights Back to Syria? 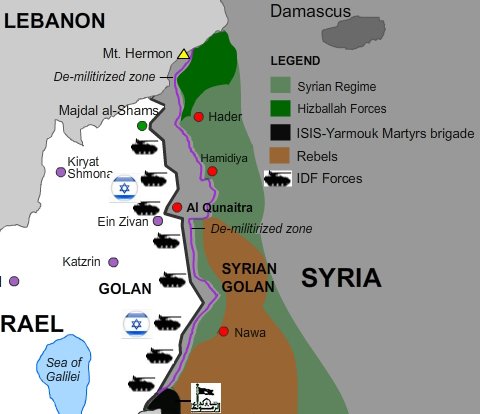 I have a personal perspective on this issue. When I was in Israel in August 2000, I stayed one night in a Kibbutz in the northern part of Israel after pulling in during the night when it was dark. In the morning, I was amazed at the impressive sight of the Golan Heights looming large before my eyes as I looked up at it from the Kibbutz. Anyone could immediately see the vital strategic importance of that high ground The Israelis would be crazy to ever give that vital territory to Syria, and I seriously question the motives of any American (or world) leader who pressured Israel to yield the Golan Heights to Syria. The Golan region is vital to Israel’s security.

It is my hope that the report in the first link is exaggerated, and that the US government is not pressurizing the Israelis into doing something that would be almost suicidal to their security interests. We will see if this is so in the months ahead of us as the Obama administration finishes its last year in office.

The first link has a very useful map in showing what territories around the Golan region are controlled by the Israelis, the Syrian government, the Syrian rebels, ISIS, etc. I was surprised to see that ISIS controls a region near the Golan where Israel, Jordan and Syria are in close proximity.  In a related link, the third link reports that ISIS fighters briefly seized a Jordanian checkpoint in that region, and that the Jordanian military was fighting ISIS forces to get back its territory.

That map shows how many opposing and allied forces are present in the Golan region. It would not take much of a spark to set off a wider war in that area. The rival forces arrayed in the region are jockeying for control of as much of the Mideast region as is possible. Ezekiel 38-39 prophesies the Iranians (and their allies: the Syrian government, Hezbollah, the Iraqi central government, the Yemenite Houthis, etc.) will be allied to Russia and the overall Gog-Magog alliance. However, the Ishmaelites (the Arabs) are not mentioned as part of that alliance and will presumably be part of the alliance arrayed against the Gog-Magog alliance. This prophesied state of affairs matches current geopolitical realities very well.

If it is true that the Obama administration is taking an extremely anti-Israeli position as the first link alleges, then it would make sense for the Israelis to seek a security alliance with the Sunni governments and peoples in the region who are threatened by the rising power of Shiite Iran. My previous posts on this topic have cited media sources that this alliance is in the process of coming into being.