THREE TORNADOES HIT MY CITY IN ONE NIGHT 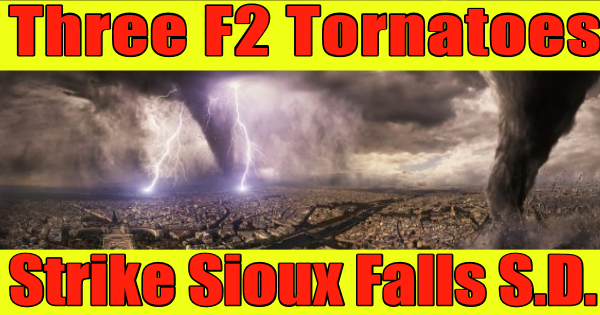 A few nights ago, the residents of Sioux Falls, South Dakota (where I live), had an experience none of us are likely to forget as long as we live. The Southwest quadrant of our city (where I live) was hit by three F2 tornadoes which struck the city within minutes of each other on the same night. I don’t think any city in our state has ever been hit by three tornadoes of that magnitude in the same night. Indeed, I wonder what cities in the USA have been hit by three such tornadoes in one night. I am going to offer personal comments about being in a tornado warning zone and I will offer graphic photographic evidence of the damage and aftermath of our local tornado damage. Thankfully, by the grace of God, no one was killed in this tornado outbreak and only one serious injury is known to have been sustained. Our city’s metropolitan area population is about 180,000, making it the largest city on a line between the Twin Cities and Denver.

Many residents were taken by surprise as the tornado sirens were never activated so many people did not realize a tornado event was imminent. My daughter and I became aware of the growing threat as we were watching the TV broadcast about the progress of the severe storm approaching us. [As an aside, I take tornado threats very seriously as the small town in South Dakota that I grew up in was obliterated by a tornado in September 1928 and never really recovered. Many tornadoes were seen by our family over the years near our town. Once, I watched a tornado hit a farmhouse west of our small town and blow it to bits. The residents of the house died even though they had taken shelter as best they could. With that memory imprinted in my mind to this day, I pay attention to tornado threats.] As the storm drew closer to Sioux Falls, it was gaining in strength. We took the appropriate steps to prepare for a tornado–putting food, water, flashlights, a radio, batteries, etc. in a lower-level crawl space away from any windows or exterior walls. Then we heard the storm hit with an intensity we have not experienced in years. The rain was very heavy and we could see and hear the wind had picked up substantially. I went to our front door (which has an overhang for protection from the weather) and eased it open. It was a good thing I had a firm grip on the storm door as it was almost ripped out of my hand and pulled outward into the vortex passing by). Moments later, we heard on the TV that a tornado had been officially spotted a few blocks south of our house. We took shelter.

It wasn’t long afterward that reports of tornado strikes were being reported on our TV stations. It soon became apparent that there had to be more than one tornado due to the distance between the stricken areas. It wasn’t until the next day that the National Weather Service determined we had been hit by three almost-simultaneous tornadoes. Some businesses were blown apart, roofs were blown off houses and garages, and the number of trees and limbs down throughout the city was incredible. Two hospitals were hit and one was so damaged that it will be closed for 3-6 months. Meteorologists reported on TV that a “bow echo” wave storm front had hit our city head-on and spawned the three tornadoes. Our mayor said that approximately 3/4ths of the city had been hit by straight-line winds of 80+ mph which explained why so many trees were down outside the tornado-impact areas. A significant number of streets were blocked due to the number of fallen trees. For readers who live in hurricane-prone regions, our city was essentially hit, at night, by a CAT-1 hurricane without any meaningful warning and the areas hit by tornadoes were in the CAT-2 or CAT-3 wind-speed zones. At least in hurricane zones, inhabitants generally receive days of warning about the approach of a hurricane. Tornadoes can hit suddenly by surprise.

In our prairie region, people hit by storms and tornadoes typically band together and help each other out quickly after the damage is done. Like a swarm of bees fixing an injured hive, the residents of our city were out at daylight to clear the damage, secure stricken buildings as best as possible, and help each other. The sound of numerous chainsaws at work was heard in many parts of the city. Within 24 hours, one would be amazed at how many trees and limbs were cut down and hauled to dumpsites. Thankfully, my house was fine and it only took about two hours to cut up the fallen branches in my yard with a lopper and a hand-saw. Some of the worst damage occurred along the main commercial thoroughfare in our city–West 41st Street. I have included several links to provide readers with a view of the damage. Some offer numerous photo galleries of the damage, so allow them time to load on your computer. The first link includes a twitter request from CBS News to use the visual material on their global affiliates, while the second link, third link and fourth link offer visuals from local media and citizen contributors. The fifth link was a story from a Twin Cities media source.

As if the tornadoes and high winds weren’t enough, the very next night a record or near-record rainfall hit along a long stretch of territory west and north of Sioux Falls roughly from Platte, SD to Fulda, MN (for those who want to find it on a map), roughly a 150 mile swath. Rainfalls of 4-7 inches were common in that stretch and there were reports of 8+ inches in some areas. This means a record or near-record flooding occurred in Southeast South Dakota. Evacuations of portions of the cities of Madison and Mitchell were necessary, the town of Montrose was evacuated and many had to flee low-lying areas. A very large number of farm fields were washed out so they will harvest no crops this year (mostly corn and soybeans). A large number of homes and structures were damaged by flooding in this swath of heavy rainfall and the number will grow as the floodwaters work their way southward along river courses. The sight of so many homes with water filling their basements is heart-rending. This water will cause more flood damage for days as our region is prairie flatland so the water drains away relatively slowly. The sixth link offers photographic evidence of the flooding damage in our region.

I urge all readers to view the seventh link. It was, sent to my daughter by one of her friends, who was at the scene of a collapse of a rural road as it occurred. It shows the immense power of water to undermine roads and carve a path through roadways. I’m sure many readers have heard warnings by authorities to avoid driving through/on flooded roads. This video shows how real the danger is of having a roadway wash out when flooding occurs. This video is a graphic demonstration of how quickly a road pressed by an immense weight, of water, can collapse. This event was not a simulation; it was a real event. It is a good reminder to always heed warnings not to drive through flooded areas.

This experience taught me a lesson. I am not as prepared for a sudden emergency as I thought I was. While emergency supplies are present in my house, I did not have them in one place or a “go bag.” If I had had such a bag (or backpack), I could have simply placed that bag in our tornado refuge without having to quickly search for essentials in an emergency. I urge readers to make similar preparations for sudden emergencies. Emergencies can be weather events (tornadoes, hurricanes, ice storms, earthquakes, etc.), but they can also be caused by man-made events. What if you live next to a refinery or chemical plant and an accident requires your evacuation due to poisonous fumes? Do you live near a railroad track? A derailment of a train carrying poisonous or hazardous material could cause authorities to require your evacuation within, a short time. The list of possible emergencies that could occur is almost endless. We have been warned in numerous Bible prophecies that the latter days will be time particularly prone to weather disasters and perilous times. The Bible does give us common sense advice on being prepared for what life throws at us. We would do well to heed that common-sense advice. I discuss that biblical advice in an article, Should Christians Prepare for Future Hard Times. If any readers need documentation that we are, indeed, living in the biblically-prophesied latter days of our age, I urge you to read my article, Are We Living in the Biblical “Latter Days?”