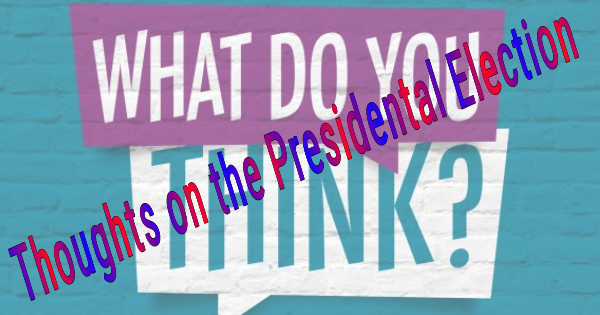 This post is intended to offer readers some perspectives and facts on the upcoming presidential election in the USA–ones which you will not likely see mentioned in the dominant Leftist media. This information should be useful not only for American readers but also for readers from other nations whose perspectives on the USA are skewed by Leftist media sources. The Leftist media would have you believe that former Vice-President Joe Biden is running away with the election–up by double digits in some national and state polls. This perspective is wrong, for reasons you will see below.

The polls have often been very wrong in their predictions of recent election outcomes: This has happened in the USA, the United Kingdom, Israel, etc. Why do they keep making so many mistaken forecasts? The first link reminds us that polls at this stage of a political campaign can be very bad indicators of what the outcome will be. It focuses on the wide lead in the polls held by Democratic candidate Michael Dukakis in the 1988 presidential election–an election he eventually lost by a wide margin to the Republican candidate, George H.W. Bush. The polls in 2016 overwhelmingly predicted a Clinton victory was “in the bag,” but Donald Trump won the electoral college by a comfortable margin. One reason why pollsters are so often wrong is that their Leftist biases cause them to structure or “weight” poll results to favor Leftist candidates and causes.

The second link reports that one reason pollsters can’t reliably predict outcomes is that so few people who answer their phone calls will talk to them or share their political vote choices. This link documents that well over 90% of Americans answering phone calls from pollsters refuse to answer pollsters’ questions. This means that the poll’s data is based on a very thin slice of the electorate because the vast majority of the electorate is not included in the polls. If the vast majority of the electorate refuses to participate in polls, how accurate can the polls be? I think one reason why so many voters refuse to respond to pollster’s questions is that they do not want their choices entered into some vast data-mining operation that is affiliated with the polling companies. I also think that since it is well-known that the major polling firms are run by Leftists, many Republican/Trump voters do not want to let any Leftist corporate entity know about their voting preferences. That may have explained why Hillary Clinton lost the election in 2016. The Democrats/Leftists believed their own polls and ignored the fact that the vast majority of Americans refuse to be polled at all. Almost all major polling entities (ABC, NBC, CBS, CNN, MSNBC, The New York Times, The Washington Times, The Wall Street Journal, etc.) make no effort to hide their contempt for President Trump and his conservative actions. Why should any Trump supporter share their views with them?

One prognosticator who correctly forecast that Donald Trump would win the 2016 election has issued his forecast for the 2020 election, and he forecasts a Trump win which will be even more decisive in the Electoral College that in 2016 (third link). There are many ways that polls can easily be rigged to favor one candidate or another. One can conduct a “nationwide poll” and have two different outcomes depending on what areas of the nation are called. For example, if you wish to rig a poll to show Biden far in the lead, you can call people in all 50 states but limit your calls to urban area codes where Democrats overwhelmingly reside. If you wish to rig a poll to favor Trump, you can conduct a nationwide poll wherein only area codes are called which are dominated by small-town and rural voters. Another way to rig a poll is to “weight” the raw polling data to include far more Democrats in the poll result than would logically be the case in an actual election. I was listening to a talk-radio host recently who explained the raw data of one recent Leftist poll had over-weighted the Democrats in the poll result by about 10% and under-included Republicans by about 10%. Logically, this will produce an inaccurate poll showing the Democrats well ahead. There are other ways to rig polls, and a post I wrote some time ago on this very topic is included as the fourth link. Please refer to that link for a fuller examination of how easy it is to rig or alter poll results. A telling example of how bigoted the Leftist polling media groups are against Trump can be found in the fifth link which cites a CNN political analyst proclaiming she can’t wait to see the police and military forcibly pull Trump out of the White House. Since CNN’s political analyst is so bigoted against Trump, is it so hard to deduce that the CNN polls will also be skewed by the same bigotry vs. Trump?

A growing issue in the election campaign is the potential role of mail-in ballots being used in large numbers or even exclusively in some states. There is considerable concern that the Democrats will use less-secure mail-in ballots to try and steal the election (sixth link). Supporting this concern about mail-in ballots is a recent election held in New Jersey where almost 20% of all mail-in ballots were ruled to be invalid (seventh link). One can only imagine the crisis that would result if similar numbers of invalid mail-in votes tipped the presidential election. Democrats have also been known to steal votes the old-fashioned way–via election fraud at the precinct level. In Democrat-controlled Wayne County (Detroit), election fraud was fairly commonplace in 2016 (eighth link). In one particularly fraudulent precinct, a recount showed that while 306 votes were counted as being cast on election night, the recount showed only 50 voters actually voted in that precinct. Since almost no Trump voters were voting in that county, we know who benefited from the fraudulent votes. If there is a mountain of mail-in votes in November, the results may not be known for a couple of days. If the mail-in votes are as provably phony as in the New Jersey example cited above, the election may end up being decided in the courts. Remember that in 2000, the courts did decide the election, and it was the US Supreme Court which had the final say in George W. Bush’s victory over Al Gore.

If you have been following the election polls conducted by the “fake news” networks, you would think Trump has no chance of victory. However, in a poll just released as this post was being written, the Rasmussen Poll, one of the more centrist ones, released its latest tracking poll which showed 51% of all voters approve of President Trump’s job performance as President (ninth link). If this is an accurate reflection of the electorate, it means Trump is gaining ground and now taking the lead among voters. Given the inner-city lawlessness and street criminality of the far Left which dominates the Democratic Party, it is only logical that President Trump, a law and order candidate, is benefiting from the excesses of the Leftist street mobs. Also, few want the USA to be transformed into Venezuela, which is a likely outcome if the Democrat’s far-Left wins the election. What about Joe Biden? He has barely ventured out into the public eye at all amidst growing concerns that he is too far advanced into senility or dementia to handle the office of the presidency. His critics say he is “hiding in the basement.” There are three debates scheduled for the presidential election, and if Biden shows up for them, his true condition may be obvious to all. Centrist TV media host, Chris Wallace, has tried to interview Joe Biden on national TV, but Biden has so far been dodging him (tenth link).

What happens in the US presidential election will have a huge impact on how world events unfold going forward. If Trump wins, the USA will continue to have a more muscular, nationalistic policy in global affairs, and Trump will continue his “America first” foreign and domestic policy. A Joe Biden victory would see an America more obsequious to China and the globalists, weaker on international affairs and he would “cave” to the very risky domestic agendas of the far Left that now dominate the Democratic Party. It is my own private expectation that if Biden wins, the equity markets (and everyone’s IRAs) will crash between election day and inauguration day. You can also expect to see a tidal wave of money and assets leave the USA for foreign locations if Biden wins.

I hope that readers benefit from the above observations and the included links. How this election turns out will determine what role the USA plays in the geopolitics of the rest of our age. We are living in what biblical prophecies call “the latter days,” and, contrary to popular assumptions, the USA is clearly identified in biblical prophecy. Please see my articles, Are We Living in the Biblical Latter Days? and The USA in Bible Prophecy, to see the abundant evidence supporting these assertions.