THE VOLCANO IN TONGA–A SIGN OF THINGS TO COME? 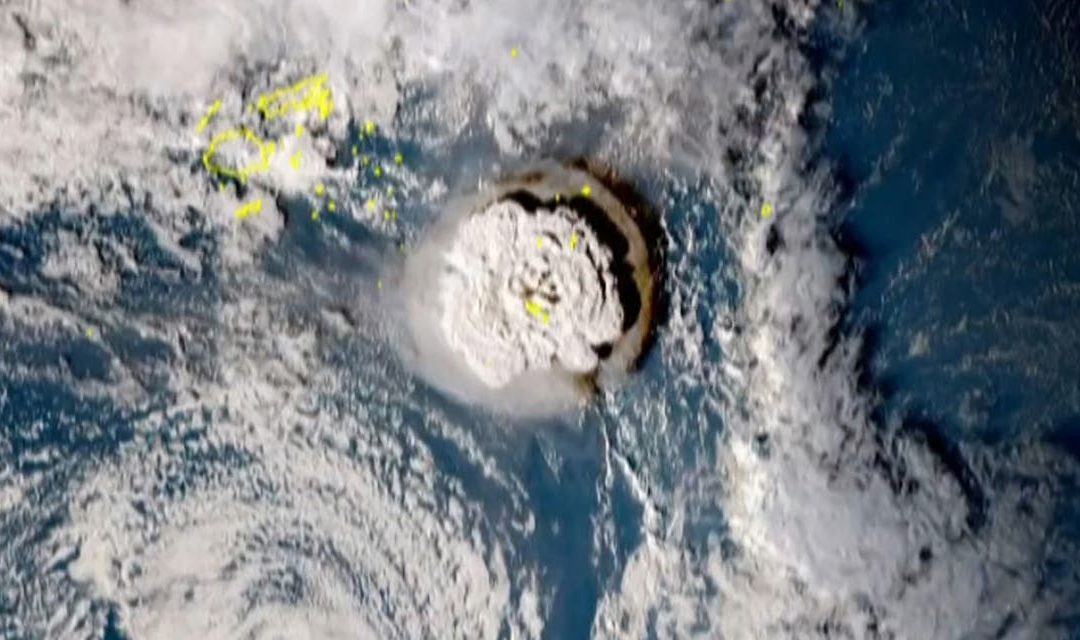 Readers have, no doubt, seen or read many media reports about the powerful volcano which erupted on an island in the archipelago of the islands of Tonga. Indeed, it was so powerful that it disintegrated the island that hosted the eruption. Thankfully, it was an uninhabited island, which greatly lessened casualties. In this post, we will examine how powerful this eruption really was, and consider whether this was an “outlier” event or the beginning of accelerating tectonic activity around the Pacific Ocean’s ring of fire.

What is the current state of affairs in the aftermath of the volcano? Recovery operations have barely begun. Local volunteers had to manually remove drifts of volcanic ash from Tongan runways before any aid supplies could arrive via airplanes. The first link describes the initial arrival of airplanes with relief supplies flown in from Australia and New Zealand. Since communication with the Tongan islands has been cut off and undersea cables are reportedly going to take weeks to repair, we may not know the full extent of the volcano’s death toll and damage for some time. The second link, third link, fourth link and fifth link describe the power of this Tongan eruption from several perspectives. The second link has a video of several witness on a beach in the pacific region and the onset of distant sonic booms created by the eruptions. Near the two-minute mark of that video, you can hear the power of the huge sonic boom which was caused by the main volcanic blast (forgive the coarse language uttered by the terrified witnesses).

This blast had major effects all around the Pacific region. The sixth link relates that the West Coast of California was able to register the effects of the tsunami from the volcano. The seventh link reported that two people as far away as Peru were killed by a tsunami wave which hit western South America. The eighth link details meteorological records that the blast waves were measurable in Chicago, Illinois! The ninth link offers really incredible news. It reports that the actual audible sounds of the eruptions were heard 6,000 miles away in several locations in Alaska! The link further notes that this is only the third time in recorded history that audible sounds from a massive volcano could actually be heard so far away from an eruption point (the previous two times were during massive volcanoes in 1883 and 1912). The tenth link is a segment from a San Francisco TV station about the measurable increase in tides on the California coast due to the Tongan volcano.

Let’s consider some possible impacts from this very major volcano and other volcanoes which may follow this one along the Pacific ring of fire. Scientists have long known that South Pacific super-volcanoes can cause a “little ice age” in northern latitudes (eleventh link), leading to colder weather, shorter growing seasons and food shortages because of those factors. Whether the major Tongan volcano was strong enough to have such an impact is not yet known. Before modern record-keeping, populations in ancient northern Europe, for example, would have had no idea why their crops were failing, and why it was so cold in Europe. Some accounts of previous “little ice ages” from volcanic activity report the Thames River in London froze over.

Does biblical prophecy have anything to say about this phenomenon and the possibility of more mighty volcanoes? I believe it does. In Matthew 24:3-7, Jesus Christ gave his disciples several clues that this human age we now live in would be coming to an end. In addition to wars, rumors of wars, famines, and pestilences (think Covid), another sign would be “earthquakes in diverse [various] places.” Luke 21 is a parallel chapter to Matthew 24 and it mentions “the sea and the waves roaring” (verse 25) as another sign that the latter days of our age will have arrived. I believe that “earthquakes” identifies any kind of tectonic activity (earthquakes or volcanoes), and that the “sea and waves roaring” could describe both hurricanes getting stronger and more frequent and volcano- or earthquake-generated tsunamis. Remember it was an undersea earthquake in the eastern Indian Ocean that caused a vast tsunami that did immense damage and killed at least 225,000 people in 2004 (twelfth link). If we are living in the prophesied “latter days” of our current human age, it would be reasonable to expect more such earthquakes, volcanoes, tsunamis and hurricanes.  Perhaps the huge Tongan volcano was an outlier event. On the other hand, it may portend increased seismic activity on the Pacific Ocean’s ring of fire. In the next major volcano, we may not be so fortunate to have the volcano blow apart an uninhabited island. Can you imagine the damage that would be done if a volcano like the Tongan volcano erupted near a large city in eastern Asia, Alaska or America’s West Coast? Matthew 24:6 does not tell us where the major earthquakes and volcanoes will occur, so they could occur in any volcanic region. Even Mt. Vesuvius in Italy is another dormant earthquake that could awaken. You can easily prove to yourself that we are, indeed, living in the biblically-prophesied period of time called the latter days. You can see abundant evidence that this is the case in my article, Are We Living in the Biblical Latter Days?