The US Military’s New Combat “Mutts” 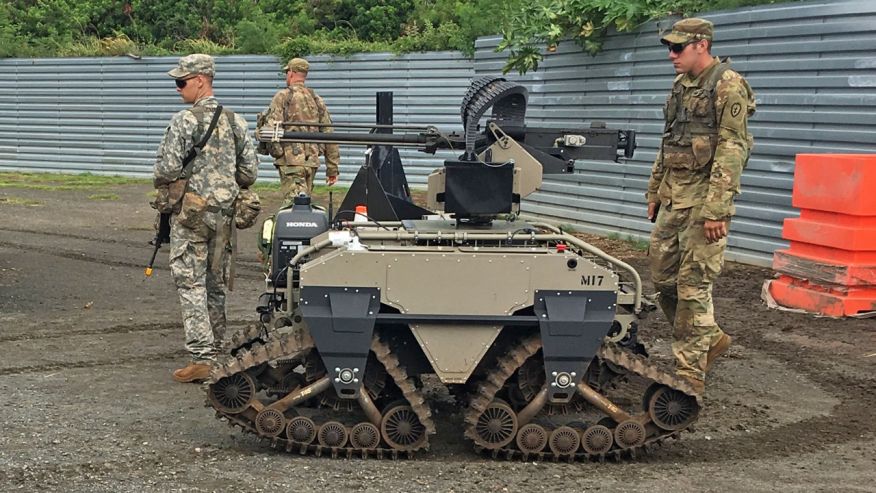 The USA’s military is almost ready to deploy a new type of combat technology: These new units are called “MUTTS” and they will be able to replace or aid combat troops in performing a number of combat functions. Those readers who saw the title of this post who were fans of the very popular Hunger Games movies may recall the MUTTS or MUTS that were deployed in those fictitious wars and martial games by the evil Capital forces. Those fictitious MUTTS were holographic/bio engineered creatures; whereas, the US military’s MUTTS are mechanical objects. The US military’s MUTTS are vehicles that can carry heavy loads into combat like mechanical mules, or they can be used as fighting vehicles which can be operated either manually or via wireless computer controls.

The logic of such combat assistance vehicles is obvious. It frees up soldiers so they don’t have to exhaust themselves carrying heavy loads into combat zones, and they are expendable when used in an autonomous or remotely-controlled mode so human lives are not put at risk in sensitive or high-risk missions. The first link shows what these new MUTTS looks like and describes them in greater detail. I have some personal observations about these new combat vehicles. I’m sure all readers have heard many media reports about hackers gaining access to all kinds of sensitive banking, financial and personal information regardless of what protective measures are in place. US government and military websites have reportedly been hacked in spite of major efforts to block hackers from gaining entry to their cyber-systems. I’m beginning to think that anything that is digital can potentially be hacked. What is to prevent an enemy from stealing or hacking into the command and control or IFF digital access codes of these MUTTS and turning them against the very American troops they are supposed to support? There had better be some kind of fail-safe command system in place to prevent that from occurring. There has to be a self-destruct command that overrides everything in case the MUTTS are hacked into reversing roles and fighting against American or allied troops.

I also wonder how autonomous these new MUTTS can be in combat situations. Can they be inserted by helicopter behind enemy lines or inserted as part of clandestine missions and perform missions without any American troops being sent with them? If so, any number of “suicide” missions become possible if these new MUTTS can be fully autonomous in their internal controls. The first link reports they have already been built and are already being field tested  I’ve always been one who believes that the real state of development of a new weapons system is far more advanced than what is being released to the general public. Perhaps they are ready to be deployed already as a new robotic army that can be deployed without any need to pay them, feed them or provide other support equipment that human soldiers need. They also serve as “force multipliers” as it enables fewer soldiers to accomplish more functions with less personnel deployed. Perhaps these MUTTS can be controlled robotically by an operator thousands of miles away much as USAF drones can be controlled by operators in a comfortable chair thousands of miles away from the theater of operation in which the drone is deployed. I can think of one other advantage to having autonomous combat MUTTS invade enemy territory. They could operate in an environment which had chemical, biological or radioactive weapons present without needing the special protective gear required by human soldiers.

In a related story, the second link describes another weapons system being developed for US ground and amphibious forces.  It is a new kind of landing craft which can carry US Marines into an amphibious landing zone and support them with on-board weapons systems. They are designed to use MRAP protective armor-plating to protect their occupants against Improvised Explosive devices (IEDs). I also notice one very important feature in their design that makes them far more effective and survivable than the old MRAPs that were rushed into service in Afghanistan and Iraq. They have a much lower vertical height that the towering old MRAPs which had very high vertical dimensions–no problem while fighting Jihadis with IEDs and AK-47s, but which makes them death traps if fighting against modern Russian, Chinese or Iranian anti-armor weaponry. Armored vehicles that have high vertical measurements are easy to see and easy to target by enemy forces. I can’t hep but wonder if the US military brass has plans to use the new amphibious vehicles described in the second link to land and deploy the mechanical MUTTS described in the first link as part of invasion force. Indeed, in the “Island Hopping” campaign of World War II against Imperial Japan, the first wave of American troops being landed on an enemy island often suffered the highest casualties. In any future such operation, the entire first wave could consist of mechanical MUTTS and other robotic platforms that are remotely or autonomously operated to eliminate US human casualties in the first wave of attacking operations. I can think of lots of very useful applications for these new MUTTS, but the above will suffice for this post. I’m sure readers can think of some other uses as well.

Daniel 12:1-4 prophesied that the level of knowledge available to mankind would increase exponentially in the end times of our age before the return of Jesus Christ to set up his millennial kingdom (Revelation 19:11-20:4). The King James Version of the Bible uses the word “increased” in Daniel 12:4 to describe how mankind’s level of knowledge would grow in the end times, but that word doesn’t even begin to capture the sense of the original Hebrew word used here. The Hebrew word translated “increased” in Daniel 12:4 is the same word translated in Genesis 7:17 as the word to describe how the waters “increased” on the face of the earth in the Flood of Noah’s time. Obviously, it meant a massive, exponential increase in that usage, and I believe it means the same thing in Daniel 12:4. That is exactly what has happened as mankind’s fund of knowledge is increasing so rapidly now that one can hardly keep up with the level of advancements. Many of these advancements have military applications, and you can be sure all the major military forces of the world want to maximize their usage of all new advancements to their military advantage. We are, no doubt, only being allowed “peeks” into what is actually being developed militarily. Revelation 13:1-4 describes that when the final “beast” system comes into being on the earth, the nations will marvel at its available military technologies and say “Who is able to make war with him?” That indicates the nations will be unaware of the real extent of new weaponry currently being developed behind the scenes until the new beast system actually unveils and deploys them.

For additional reading, I recommend these articles available at my website: Are We Living in the Biblical Latter Days?, What Ezekiel 38-39 Reveal about a Future World War III, and Is Babylon the Great about to Fall…Ushering in a New Beast System? If you read these articles, you will be surprised just how relevant the Bible really is in our modern times.

My thanks to a reader who tipped me off to this item.