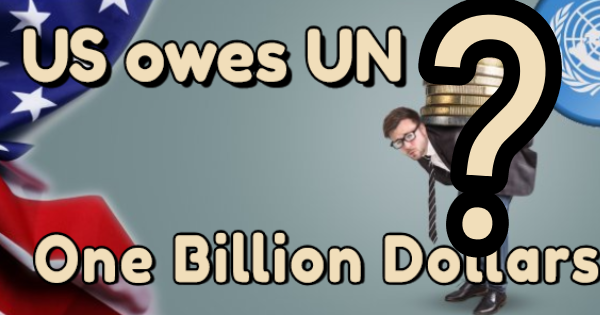 The UN has issued a statement that the USA “owes” it $1 billion in dues payments (first link), and that the UN will be “unable to pay its staff and bills” if the USA (and some other nations) don’t pay their dues quickly. In all honesty, I think that many Americans would regard it as “progress” if the UN stopped paying its staff and shut its doors. The UN has long been known for its anti-American actions and statements, and the General Assembly routinely condemns the USA and Israel, and votes against American interests.

Allow me to give a recent example of how anti-American the UN truly is. The second link has a headline that reports that a top UN official recently said that “illegally entering the US is a right.” This official, Melissa Flemming, is reportedly an American, but her statement shows deep contempt for US law and border security. Why should President Trump or the US Congress pay any money to a UN that is so blatantly opposed to America’s fundamental right to national and border security? Has Ms. Flemming issued any statements that people have a “right” to enter Russia, China, Iran or North Korea illegally? I doubt it. The UN has long attacked the USA while treating dictatorial and outlaw regimes with respect.

Let’s consider the issue of how the UN is funded. When the UN was first formed, the USA was the only Permanent Member of the UN Security Council that was not deeply damaged by World War II. Only the USA was in a position to fund the lion’s share of UN expenses. However, the modern world is in a very different situation. Many prosperous nations now contribute very little to the UN’s costs. According to the third link, the USA paid 22% of all UN expenses in 2016. No other nation came anywhere close to that level. Japan was second with a 9.7% share, with China paying 7.9%, Germany paying 6.38%, France 4.9%, the United Kingdom 4.5% and Brazil 3.8%. Many nations pay almost nothing in dues.  If the dues are based on GNP, how can China’s share of the UN’s bills be so small? I’ve seen many media stories that China is very close to surpassing the USA in its national GNP. Based on that alone, China ought to be paying much more than it is now paying. There are five nations that are Permanent Members of the UN’s Security Council: the USA, Russia, China, France, and the United Kingdom (the principal members of the Allies in World War II). These nations have unusual veto power over UN actions. This power ought to be worth something in dues contributions. The USA pays roughly the same, in UN contributions, as the other four permanent members of the Security Council combined. Clearly, the USA has been paying a disproportionately large share of the UN’s budget since its inception.

The proportional dues, of each nation in the UN, needs readjustment on a rather urgent basis. Also, it is my opinion that before the USA pays a penny more, Ms. Flemming ought to make a very public apology to the USA on behalf of the UN staff. I’d bet that all the Americans who work for the UN are from the globalist/Leftist camp, so much of the American public is represented at the UN by no one on its staff. For some desperately needed balance, perhaps we need a rule that 50% of all Americans on the UN’s staff be from conservative backgrounds? I do not know if Congress has already appropriated the money for the USA’s dues to the UN. If it has not done so, I suggest that it not even take up the matter until the UN radically restructures itself in many ways. It needs to not only cut its staff expenses, but it also needs to radically restructure the dues paid by the member nations. The USA, which has paid far too much for far too long, needs to have its share reduced considerably. Speaking of past-due international bills, have the European nations ever re-paid the USA for its costs in saving and rebuilding Europe in the Marshall Plan which followed World War II? Has Germany ever reimbursed the USA for American costs in saving the population of West Berlin in the Berlin airlift when Russia was trying to starve them into submission? There are many nations that owe their national survival to the USA, yet so often they vote against American interests in the UN. Perhaps the UN ought to pay property taxes to the city of New York for all of its costs in police and fire protection for UN personnel and properties? There are many ways the UN can and needs to be re-organized.

From a larger perspective, the UN has failed in its effort to become a “world government.” I say that with a sense of relief as the UN is overwhelmingly globalist/leftist in its actions, staffing and funding priorities. It is hard to see such a discredited organization ever becoming a world government. However, biblical prophecy does foretell that a global government of some kind will come on the world scene near the very end of our current age. Revelation 13 and 17 prophesy that a “beast” system will emerge through the actions of a cryptic alliance of “seven heads and ten horns” acting together to overthrow the current world order. The new beast system will be autocratic and have the power to control the world’s financial systems (Revelation 17:16-17). The political leader of this new global government will be greatly empowered by the miracle-working powers of a “religious” leader who will be working miracles to compel global obedience to the new beast system (Revelation 13:12-14). This same figure is called “the son of perdition” in II Thessalonians 2:3-11. That prophecy also adds in verse 9 that some of the miracles will be “lying wonders.” In other words, they will be faked, and this is certainly possible with the high-tech capabilities of modern society (invisibility technology, Artificial Intelligence, etc.) to fake some miraculous looking events. However, Revelation 13 shows some will be real miracles–empowered by “the Dark Side of the Force” (to use Star War terminology). However, the beast himself will be miserable for much of his allotted 42 months in power (Revelation 13:5). Revelation 11 prophesies that there will be two incredibly powerful prophets sent by God (the Two Witnesses) who will plague not only the beast during much of his allotted time but also the entire world as often as they see fit (Revelation 11:3-7). Revelation 16:10-11 prophesies the high officials at the “seat of the beast” will be gnawing their tongues for sheer pain (courtesy of a plague from the Two Witnesses, no doubt).

We are heading into very interesting and very challenging times.