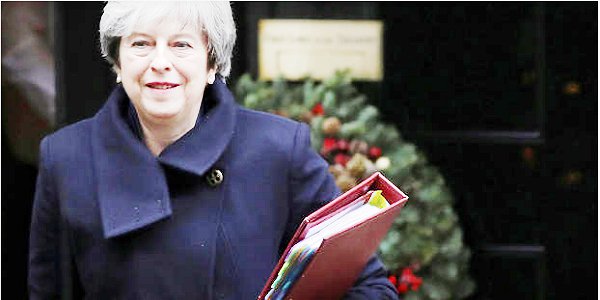 The links include the fact that while May had personally promised Parliament a “meaningful” vote on a final Brexit deal, there was no binding legal obligation on her to make her do so. She could have in the future, after a deal had been reached, declared that no vote by Parliament was actually needed in order to implement the deal. Now that Parliament has legally bound her (or any future British leader) to submit the final deal to Parliament for a final approval vote, she cannot renege on any mere personal pledge to allow such a vote. This is a vitally important step by Parliament, and I wonder if people really realize how vital this parliamentary vote was. It has radically changed the complexion of the EU-UK Brexit negotiations. Before this vote, the EU negotiators believed that they were negotiating a final deal with May herself. Now the EU realizes that May has suddenly become only an interlocutor between the EU and the British Parliament. The British Parliament now has the authority to reverse any deal that the British government might make with the EU officials.

It has been my impression that the EU has not been negotiating in good faith in these Brexit talks. I may be in error, but the media stories I’ve seen or read always stressed that the EU’s top bureaucrats have been instructing May that she has not yet given enough concessions to the EU in the talks. While I’ve seen media reports of a variety of British proposals, the EU leaders seem to haughtily sweep them away as insufficient, and I have not seen the EU negotiators actually offering any substantive counter proposals on the critical issues in these talks. We all need to be reminded that something odd happened in the aftermath of the British Brexit vote. Now-Prime Minister May was on the “Remain” side of the Brexit vote. In other words, she was on the pro-EU side of the vote. Yet after the vote, she became the Prime Minister in charge of overseeing the Brexit talks and the UK’s exit from the EU. Why didn’t a leader of the “Leave” side of the Brexit vote lead the new government? This fact has always puzzled some observers–me included. This fact has allowed for the possibility that a classic “bait and switch” could have been perpetrated on the British voters at the very last moment of the Brexit process wherein the British government could have renounced the Brexit vote result and “decided” to stay in the EU despite the vote of the British people. The further fact that May and her government fought like tigers to prevent the Parliament from having the final say in the Brexit deal does make one wonder if the “bait and switch” option was what they had planned all along. After all, if May and her government had no problem with the British Parliament having the final authority to approve or reject a Brexit deal, why did they fight so hard to prevent the Parliament from having such authority?

Now the question of whether the UK will leave the EU in a “hard” or “soft” Brexit becomes a much more prominent question. We now have the possibility that the British Parliament will reject the final Brexit negotiation with the EU and the EU, in turn, will declare that negotiations will not be resumed. This would result in a “hard” Brexit which would involve the UK negotiating a separate trade deal with each member nation in the EU. The British homeland will hardly sink if that happens. The UK will still have strong trade relationships with the USA, Canada, Australia, New Zealand, Japan and all the African and Asian nations (including India) which are part of the extended British Commonwealth of nations. The segment of the British economy that would likely be hit the hardest by a hard Brexit would be “The City,” the almost independent bloc of banking and financial entities that is headquartered in London. The City fought very hard to prevent a Brexit victory and then even tried to nullify the outcome via court appeals in the UK’s judicial system.

There is a common saying that “actions speak louder than words.” The biblical equivalent is “By their fruits you shall know them” (Matthew 20:7). In other words, evaluate the deeds and actions of people and pay little attention to their mere words. Lets consider something. The City (London’s bankers and financial powers) opposed the Brexit vote and fought (unsuccessfully) to overturn the Brexit vote via legal actions. Before she was Prime Minister, Theresa May opposed the Brexit vote and was on the side of those wanting to keep the UK in the EU. Now, as Prime Minister, she has just fought vigorously (and unsuccessfully) to prevent the elected British Parliament from having the legal authority to have the final say on her Brexit negotiations and the final shape of any deal. These facts do make me wonder if Prime Minister May’s real constituency resides with the monied interests of The City instead of the voters of the United Kingdom. It is a question worth consideration.

Before Parliament’s vote on this matter, the EU bureaucrats were in the driver’s seat in the EU-UK Brexit negotiations. Now the British Parliament will have legal authority to reject any Brexit deal that May makes with the EU. This is a huge change and it alters the entire character and direction of the talks. It also means that the power of the EU to impose its will on the people of the UK has been defanged. It also sets a precedent that any other nation of the EU that decides to leave the EU will also be able to have its own Parliament have the right to approve or reject any deal the EU’s bureaucrats seek to impose on their nation. Giving “power to the people” is an alien concept to the EU’s top bureaucrats, who are neither elected nor accountable to any group of voters anywhere. Their constituency is the bloc of powerful insiders who put them in their unelected positions.

This is one more major development that weakens the power of the EU, and makes it more likely that it will fracture further in the future. From a biblical point of view, the EU is one of the major globalist entities of the alliance between the world’s political leaders and corporate/merchant/banking classes (Rev. 18:2-3) which has been close to imposing their own barely-concealed form of dictatorship over the world’s people. The biblical prophecy of Revelation 17-18 labels this insider/globalist alliance as “Babylon the Great,” and it foretells that it will suffer a spectacular collapse in the latter days of our age. The original Brexit vote in the UK, the election of Donald Trump as president of the USA, the rise of populism all over Europe, and the recent action by the British Parliament to assert legal authority over the Brexit negotiations and deal are all symptoms of this accelerating decline in the power of Babylon the Great’s global insider network.

For additional information about this future collapse of the world’s globalist/insider network that now dominates the world, please read my articles, Is Babylon the Great about to Collapse…Ushering in a New Beast System? and The Babylonian Origin of the Modern Banking System. If you read these articles, you will understand that modern nations are acting out a “script” that was written for them millennia ago in biblical prophecies inspired by the Creator God. That the world largely does not believe in a Creator God is irrelevant to the outcome of what happens on the earth. God is going to implement his will for the nations whether they want God’s will to be done or not (and they don’t). However, God has declared that he will fulfill his prophecies and he is already doing so (Isaiah 41:21-26, 46:9-11). You can understand more about God’s prophecies for our time if you read the articles mentioned above.