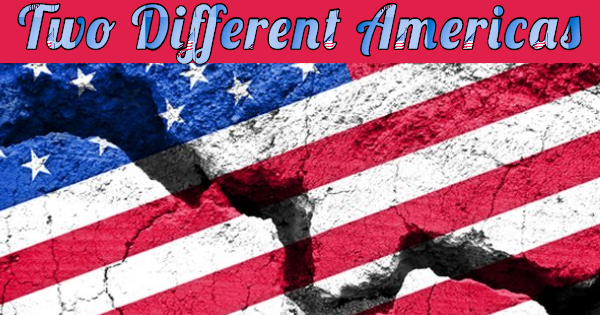 America’s internal traumas continue with the latest urban explosion after a white policeman shot a black man in Kenosha, Wisconsin. This is receiving much publicity and typifies the growing chaos in major urban areas. Another insightful example of the two different Americas we now live in took place in Gardnerville/Minden, Nevada. Urban destruction was averted there and did not take place in this “small-town America” Nevada community, but it received almost no publicity because burnings and street criminality gets all the media’s attention. Let’s examine these two contrasting realities in American communities. They aptly depict the two different “Americas” that now exist.

Kenosha has about 95,000 in population while the Gardiner/Minden area has about 6,200. Kenosha has experienced two nights of violent and destructive rioting after a black man was shot by a white policeman. Virtually an entire car sales lot was set afire, with the first link reporting approximately 100 cars being torched. The first link, second link, and third link detail what happened in Kenosha in the first night of violent street crimes and chaos with many embedded video clips in that link which make the story graphically real. One can almost feel the heat from the intense fires that were underway. The governor of Wisconsin called out the National Guard to help restore order in Kenosha. It apparently had little effect as Kenosha experienced the second night of violence with more cars burned and more havoc being done to the property of innocent people by criminal street gangs (fourth link). Reportedly, a second car sales lot was also hit. This type of event has happened in many urban areas in America.

The example of what happens in small-town America is the fifth link. The small city of Gardnerville/Minden, Nevada had its citizens literally “up in arms” to stop the possibility of a “BLM [Black Lives Matter] riot in their city. It is not clear how that area heard that a BLM event was going to take place in their community, but since many BLM/Antifa/Leftist events have turned violent and criminal in America’s big cities, the local citizenry took action to mobilize before anything could get destructive or out of control. In the revealing video clip, you can see some local city/county law enforcement personnel but the vast majority of those present seemed to be armed civilians. The video clip credits some of the armed people being members of a Nevada militia group–I suspect they are the ones in military-style uniforms. The right of citizens to form such militias is recognized in the Second Amendment to the US Constitution. As you can see in the video, with armed civilians present in large numbers, no violence occurred there as the citizenry refused to allow it by presenting an armed and united front against any potential rioters (I would have picked different background music for the video but it is very much worth watching).

I won’t prejudge what happened in the shooting of the man by a policeman in Kenosha, but the facts will come out in a full investigation, no doubt. However, what is clear is that feelings of anger and lawlessness are now so strong in all-too-many American cities that it only takes a spark to set off a quick reaction of rioting, arson, and looting, burning, criminality, etc. There is clearly a growing number of urban and lawless “protesters” who are ready to seize on any event as an excuse to riot, loot, vandalize, commit arson, etc. These throngs of people inclined to riot and mayhem are being encouraged by big-city mayors who tolerate extended lawlessness and by governors in large states that also do little or nothing to stop the violence when it erupts. In what seems to be a universal common denominator, the big city mayors and large state governors doing this are Leftist Democrats who seem to be in sympathy with the street mobs. The refusal on the part of big-city mayors and big-state governors to protect people and property and let the mobs run the streets of downtown areas for extended periods of time serves only to foment and embolden more lawlessness. Portland and Seattle are examples of lawlessness being allowed to run wild for days or even months (in Portland). A primary example of elected officials refusing to protect people or property was in Minneapolis where lawless mobs burned down many businesses and even burned out a police precinct building. The Democrat governor and Democrat mayor of Minneapolis dithered for days while part of the city burned before any effective measures were taken to control the situation. In the small city in Nevada, the rapid mobilization of armed citizens stopped any rioting or lawlessness from taking place. I do not know how real the threat of imminent lawlessness was in that Nevada town, but it reveals much about rural and small-town America that even the perceived threat of a riotous mob coming to the city led to what appears to be a spontaneous mobilization of the armed adults in the area. Notice the reaction of this conservative region was not to burn down or vandalize the property of any innocent people, but it was rather to protect the lives and property of innocent people. These two contrasting examples reveal much about the Two Americas we now live in. In Leftist inner cities, the rule of law quickly breaks down and the lawless mobs resort to instant violence instead of relying on the due process of law. In conservative America, people overwhelmingly act to protect each other and everyone’s property rights. Which “America” would you rather live in? The Leftist street mobs venting their rage against innocent people and innocent property do not realize it, but the entire nation sees their dangerous lawlessness on TV and this must inevitably drive many voters to Trump as the only hope for “law and order” in America.

Seeing the destructive mobs on TV and the prospect of a Biden administration is causing another development in the USA. The demand for guns and ammunition just skyrocketed to new levels. This is true in both Red and Blue states. The sixth link, from the Red State of Texas, cites the national explosion in gun sales and reports one local gun store in Texas has experienced a 60% increase in gun sales since the pandemic [and urban violence] began. It reports common calibers of ammunition are hard to find anywhere due to the immense demand, and it, comments on the “huge upswing in first-time buyers.” The screams from the left to “defund the police” can only further increase the demand for guns among private citizens who feel they may be forced to rely on themselves for armed protection. The seventh link is from an Iowa media source; Iowa being a “swing state” in most elections. It also comments on the national gun-buying trend and includes a very informative graphic about the monthly federal gun-purchase applications in the nation during the first half of 2020. It reports that an all-time record of over 3,900,000 applications for the purchase of new guns occurred just in June and that 2020 is poised to break all annual gun-sales records. Keep in mind more than one gun may be bought with a single application, so the number of guns is surely significantly higher than 3.9 million in June. The eighth link is from Maine, a reliably Blue State which reports gun sales there have also gone up considerably, and that many of the new buyers are women. Each new gun-buyer is likely a voter for Trump as they will want a president who will support the Constitutional right for them to own and use their guns.

I gave myself an investigative assignment and went to a local gun store to evaluate the inventory there. There were numerous shotguns and gauges of shells to buy. This is, no doubt because local stores stocked up well in advance of our well-known pheasant hunting season. I saw a considerable number of guns for sale, but ammunition was in very short supply for many calibers. There was no 9 mm or 38 special ammo at all. Ammo for .357 guns was available in a very small quantity but only in the top-end expensive options where bullets cost $1 per round. There was a good number of .223 rounds, but only in small packages. I’ve never seen ammo in such short supply. I spoke with a salesman who told me they get new trucks every day bringing inventory but they can’t guarantee when certain ammo types will ever come in. One way Democrats could try to restrict gun usage if they are elected is to ration the amount of ammunition anyone can buy and also tax it heavily.

This brief discussion was intended to contrast the fact that there are two very different experiences of “America” now present. Urban area ruled for a long time by Democrats, are descending into increased dangers from lawless and criminal street thugs pretending to be “protesters.” Peaceful protest and assembly are Constitutional rights, but escalating a protest into violence is not right anywhere in the USA. Fearing that the violence and criminality in urban areas could spread to other parts of the nation, people in rural and small-town America are “gunning up” as never before.

The Apostle Paul warned us that “perilous times” will come upon mankind in the latter days (2 Timothy 3:1-4). Modern events have proven his prophecy to be “spot on.” If you have any doubts that we are living in that prophesied time, please read my article, Are We Living in the Biblical Latter Days?

My thanks to a reader for sending me the link about the Nevada community.