THE SPARTAN ISRAELITES WHO HALTED THE PERSIAN EMPIRE 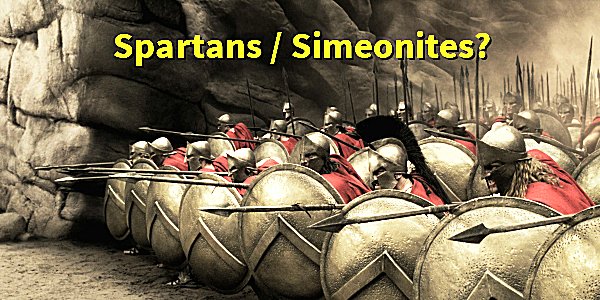 Many readers have, no doubt, seen the movie, 300, starring Gerard Butler which was released a number of years ago. It tells the inspiring story of King Leonidas of Sparta, who led 300 of his Spartan warriors to the pass at Thermopylae circa 480 BC to block the path of the immense Persian army under Xerxes that was descending upon Greece. Their noble sacrifice in the battle of Thermopylae inspired all of Greece and bought time for the various city-states to organize a resistance to the Persian invasion. The aforementioned movie is drenched in graphic and bloody combat scenes and is outlandish at times (especially in its portrayal of Xerxes), but the self-sacrifice of the martial Spartan detachment inspires people still today. That movie also is laughably inaccurate in its portrayal of the Spartan warriors, who are presented as soldiers who went to war with appropriate armaments but dressed only in capes and leather loincloths. There was an earlier movie, The 300 Spartans, released in 1961 starring Richard Egan, which told the same story but it showed the Spartans dressed and armored in a much more realistic manner. However, it dated to a time when Hollywood presented war movies in a very sanitized way where the battle scenes were acted out with very little blood being shown.

In both my books (available at the homepage of this website) and an article, I make the case that the Spartan warriors were Israelites from the Israelite tribe of Simeon, which, like the Spartans, was known for being warlike and ruthless. According to the book of First Maccabees, a Spartan king acknowledged in a letter to a Jewish High Priest that the Jews and Spartans were “kinsmen” and fellow descendants of Abraham. If so, where is the historic connection between the two groups of people? The Bible actually does offer us a solid historical context where the Spartans could have originated from a group of Israelites that branched off from the rest of the Israelite tribes. In the book of Numbers, there are two separate censuses taken of the Israelite tribes when they left Egypt. The first is in Numbers 1 and the second is in Numbers 26. The second census indicates that a majority of the tribe of Simeon left the Israelite encampment right after a chief Simeonite prince was executed by a Levite, Phineas, in Numbers 25. The context argues that Moses saw that so many people had left the Israelite encampment at that time that he decided to call for a second census to see how many had departed from the various tribes.

If they had struck out on their own, one would expect the Simeonites to found a martial city or nation of their own…in other words, a city-state just like Sparta. History records that the Spartans had a different origin than the rest of the Greeks. The fact that the Spartan letter cited in I Maccabees records that the Spartans regarded themselves as kinsmen of the Jews and jointly descended from the patriarch, Abraham, is strong evidence that the Spartans had to be from a fellow Israelite tribe, but where had they originated? Since Numbers 25-26 confirms that most of the tribe of Simeon left the Israelite wilderness encampment circa 1410 BC, it makes sense that this warlike band of Simeonites would resurface later in history in a location other than the Promised Land. The origin of the city-state of Sparta is unknown, but it began to be noticed as an independent entity by at least the 11th or 10th century BC. Years ago, I wrote an article about the Spartan connection to the Israelite tribe of Simeon and I am including a link to that article. I urge all readers with an interest in history to read that article as it will enable you to see ancient Greek and Mediterranean history in an entirely new light.

As a side-bar, I’d like to note that there was an earlier “Brave Three  Hundred” warrior group which was mentioned in the Bible. It is the group of 300 warriors that accompanied the hero, Gideon, when he, like Leonidas and his 300, fought against an immense army of invaders who came from the east (circa 1150 BC). The story of Gideon and his brave 300 warriors is told in Judges 6-7. Unlike Leonidas and his 300, Gideon and his 300 emerged victorious over the eastern host albeit with God’s intervention to grant the victory. Gideon and his 300 warriors were also Israelites. Leonidas and his 300 did not emerge victorious although their noble sacrifice has been honored throughout time. I cannot help but wonder how the story of Leonidas and his 300 holding the narrow pass at Thermopylae would have ended if they had not been sabotaged by a traitor who revealed a secret pass around the Spartan position to the Persians. Perhaps they might actually have won if it had not been for that betrayal. At the very least, they would have delayed the Persian host for a much longer period of time.

Please enjoy the article below. It has been too long since I mentioned it.