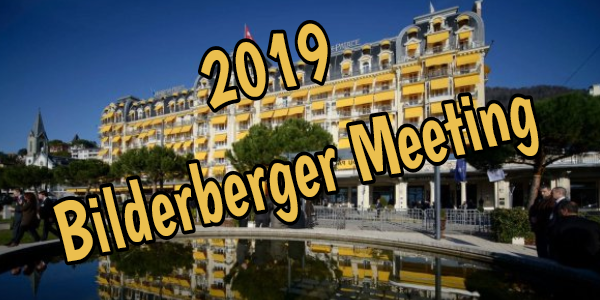 Once again, the Bilderberger group has held its annual meetings in great secrecy to discuss global matters behind closed doors where the independent press and public are not allowed. This year’s meeting was in a resort in Switzerland, and some selected bits of information are released by the Bilderbergers but they operate under rules where participants must be tight-lipped about what transpires at these meetings.

There were some media mentions that US Secretary of State Pompeo flew in to attend at least a portion of the sessions (first link and second link), and I suspect he was there to defend Trump’s nationalistic foreign and domestic policies vs the globalist policies that are favored by the host Bilderbergers. There was a list of participants which was released to the world outside the confines of the Bilderberger conclave, but I have little doubt that it is not a comprehensive list. It is my opinion that the list of unreported attendees would be quite interesting to review if it had been made known. Among the globalist glitterati who attended were heads-of-state, heads-of-state wannabees, business and banking tycoons, politicians, media moguls, etc. Readers can review the third link to see the list of acknowledged attendees; you might find it of interest to see who attended the meetings from your nation. Of course, Henry Kissinger was there, and he has been a linchpin in the globalists’ movers and shakers list for decades. There are many influential people in global politics as well as the business and banking sectors represented on the list of attendees.

Last year, I posted about the 2018 Bilderberger meetings (fourth link) and observed that former Colorado Governor Hickenlooper was among the attendees. Since he was a private citizen at the time, I opined that he had been invited by the globalists to be vetted and evaluated as one of their approved candidates for the Democratic nomination for president in 2020. Sure enough, Hickenlooper announced later that he was a candidate for the Democratic nomination for president in 2020. So far, he has been barely visible among the plethora of candidates running for the Democratic nomination. With so many candidates in the Democratic presidential nomination race, it raises the possibility that no candidate will be able to muster a majority of the delegates needed to obtain the nomination. This raises the possibility that they will “compromise” on a candidate who did not participate in the nomination process. This is actually an advantage for such a candidate as he/she would have no “baggage” from a hard-fought primary brawl where each Democratic candidate has been digging up and hurling dirt at his/her rivals. When I reviewed the 2019 revealed list of attendees, there were two Democrats who might fill the role of such a compromise candidate. Both are female. Former Senator Claire McCaskill of Missouri, who was defeated in a senatorial race, was on the list as was Stacey Abrams, who was defeated in a race for the Governorship of Georgia. Abrams apparently already has some “trial balloons” in the air to advocate for her possible candidacy, as can be seen in the fifth link. Since both of these politicians were defeated in their last effort for public office, they seem unlikely options at first glance. However, the Democratic party is still mired in identity politics and may want another female candidate after Hillary Clinton’s failed attempts for the presidency. Stacy Abrams is also a black female politician from the south, so that gives her gender, racial and regional appeal. If the 2020 Democratic convention deadlocks on a candidate, let’s watch to see if either of these two Bilderberger-approved politicians is offered as a compromise candidate.

Are the Bilderbergers a secret world government as is alleged by some? That may be a stretch to prove, but they are certainly a secretive forum for globalist office-holders and their private-sector donors and backers. Those wanting more information about the history of the Bilderbergers and their affiliate groups (The Trilateral Commission and the Council of Foreign Relations) can read the sixth link which offers a rather comprehensive history of these groups and their activities over the years.

Whether the Bilderbergers are a global government or merely a secret gathering place for globalists to set world agendas favorable to their interests, I’d like to point out that their meetings and considerations doubtlessly failed to consider the really major player in world affairs–the Creator God of the Bible. That Creator Being has many very specific prophecies about the world’s trends and geopolitics in a period of time referred to as the “latter days” of this age–the period of time immediately prior to the return of Jesus Christ and his heavenly army to wrest control of all the world’s governments (Revelation 19:11-20:4). The content of these prophecies have been a matter of known record since antiquity, so no one can allege today that they were written: “after the fact.”  These prophecies are very specific and include the founding of an independent Jewish nation in the former Promised Land, the dawn of a very high-tech civilization and the development of weapons of mass destruction that could potentially destroy life on earth–all in the latter days. Many people in our biblically-illiterate generation do not realize these events were all specifically prophesied in the Bible.

You can read about these fulfilled prophecies in my free article Are We Living in the Biblical Latter Days? The invisible God of the Bible calls on everyone to look at the fulfillment of his biblical prophecies as clear evidence of his sovereignty and reality (Isaiah 41:21-26, 42:9 and 46:9-11). Only a true Creator Being could make such specific prophecies centuries and millennia in advance of their time and bring them to pass on his schedule. If Nostradamus’ cryptic prophecies had any such record of accuracy they would be hailed as truly inspired. However, since these accurate prophecies are contained in the Holy Bible, this God-rejecting time wants to ignore this critical reality. However, they ignore it to their own peril because God is going to bring them to pass whether people on earth want him to do so or not. God’s prophecies reveal that there is an overall “script” which the nations will act out in the latter days–knowingly or unknowingly.

It matters not what secretive or conspiratorial groups on earth are planning for the future. God may allow their plans to succeed for a while until they conflict with his overall plan and prophecies and, at that point, God will forcefully intervene to make sure his plans are implemented. What can the world’s power-brokers do about it? Nothing! A Creator Being who can design and create an entire physical universe can do anything he wants to do within it. Isaiah 40:15-17 states that in God’s perspective, “the nations are a drop in the bucket…the small dust of the balance…All  nations before him are as nothing…” Psalm 2:2-5 adds that even though “the kings of the earth set themselves and the rulers take counsel together against the Lord and against his Anointed…He that sits in the heavens shall laugh …and have them in derision.” I’ll bet the Bilderbergers don’t read or consider that verse at their meetings. It doesn’t matter–they will be governed by it anyway.

For more information about how the current global world system will collapse and be replaced by a new global system at some point in our foreseeable future, please read my free articles, Is Babylon the Great about to Fall…Ushering in a Global Beast System? and The Babylonian Origin of the Modern Banking System.