The Real Purpose for That Runaway US Military Blimp? 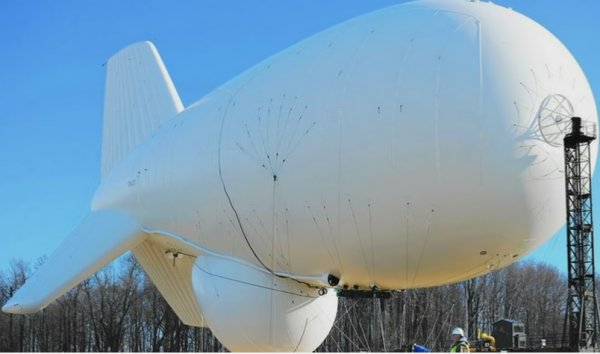 There were a lot of jokes at the expense of the US military when one of its blimps that has been stationed on the East Coast of the USA broke its tether and caused considerable damage as its very long tether dragging on the ground severed power lines and did other damage (first link). When it finally came down in Pennsylvania, local Sheriff’s department personnel pumped lots of shotgun shells into the blimp to make sure it deflated and caused no further damage. However comical the idea of a blimp being useful in modern warfare scenarios may seem, I think there is a very serious military mission for this blimp that was inferred in the first link and other media reports, but was never stated directly as the authorities did not want to alarm people.

The second link has video footage of the blimp, but notice the brief comment there that the blimp was stationed to give coverage on the Eastern Seaboard from Hartford to Baltimore. A map that appeared in the October 29, 2015 issue of the USA Today (“Breakaway blimp goes AWOL for a joy ride”) shows the defensive coverage area of this blimp extended from Vermont and New Hampshire on the north to Virginia and North Carolina on the south. The first link reports that the mission for this blimp included detecting cruise missiles, drones, etc. fired at the USA. Let’s consider the cruise missile threat to the USA. Europe and Africa are a long way away from the Eastern USA so the threat is not from ground-launched cruise missiles. The threat would have to be from air-launched or sea-launched cruise missiles. Sea-launched cruise missiles could carry EMP warheads fired from military or civilian ships in the Atlantic Ocean and detonated over the Eastern Seaboard, causing systemic power grid failures over a very wide area. The loss of life from an EMP attack upon the USA would be immense, as the excellent book, One Second After, by William Forstchen, documents. What was not stated in any media article about the blimp is that Iran is known to be preparing to attack the USA in just such a fashion.

The third link reports that the Iranian leaders have all but dismissed the Iranian “deal” negotiated recently between Iran and western powers as being irrelevant. They made it clear they are not giving up their nuclear programs. What is even more ominous is that the link reports that Iran is actively planning and practicing to carry out an EMP cruise missile attack upon the USA. The fourth link reports that Iran has been practicing launching cruise missiles in EMP attack profiles from at least the year 2008 (I recall doing a post about this threat years ago). The Iranian EMP attack practice missions have been occurring over the Caspian Sea, whose shores are shared by Iran, Russia, and other Soviet-era states. Early in October of this year I did a post about the landlocked, Russian naval flotilla that is based on the Caspian Sea. The world now knows that the Russian flotilla there is equipped with long-range cruise missiles that can hit targets as far away as Syria, so they are militarily-capable naval vessels. There is another purpose that they may be serving. Russia and Iran can carry out naval weaponry tests on the Caspian Sea far from the prying eyes of western naval vessels, submarines or military recon aircraft. One particular type of weaponry they may be testing and perfecting there are the EMP cruise missiles. They can not only test the effectiveness of cruise missiles with EMP warheads, but they can also test the effectiveness of their own defensive “hardening” techniques to make sure their own vessels are not harmed by an EMP blast. To build a landlocked naval flotilla in the Caspian Sea requires a major purpose to justify the expense of building ocean-going naval warships on an inland sea that is not connected to the ocean. It appears to me that Russia and Iran are working together in the Caspian Sea region to prefect their EMP-equipped cruise missiles.

This brings us back to the runaway blimp. To protect against an EMP attack on the US mainland, the US military must build a defensive detection network and connect it to rapid-response missile interception units (on land batteries or on US Navy ships) to shoot down EMP cruise missiles as the US military will only have minutes to react before they detonate. The runaway blimp was designed to detect incoming cruise missiles, so I think it is obvious that it was designed to be placed in a stationary location to protect part of the Eastern Seaboard vs. EMP attacks. This particular blimp’s protection area includes the political center of Washington, DC and the financial center of New York City and key US Navy bases. This was likely designed to be a system of defensive detection blimps that would eventually be stationed along all US maritime borders. Using a system of stationary blimps with sophisticated defensive detection gear positioned at key areas of the US coasts would be a better option that having large numbers of AWACS aircraft aloft and on-station on a 24/7 basis to protect US coasts.

So I think the mission of the defensive detection blimps is no laughing matter. It is likely vital for national security, given that Iran (and likely Russia) have been testing and perfecting their EMP cruise missiles in the Caspian Sea region for at least seven years. The US military better get those defensive detection blimps up and deployed on all US coastlines (with stronger tethers!). Iran doesn’t need to use a naval warship to conduct an EMP cruise missile attack vs. the USA. They merely need to place EMP-equipped cruise missiles inside a civilian merchant ship and then raise them from the below-decks region of a ship on a hidden gantry to fire them as they approach the US coast. The danger is very real.

This is just one more major weapons system from the Gog-Magog alliance of Ezekiel 38-39 that threatens the USA, Europe, Israel and all the Pacific Rim nations aligned with the West.