THE “QUAD” ALLIANCE VS. CHINA CONTINUES TO STRENGTHEN 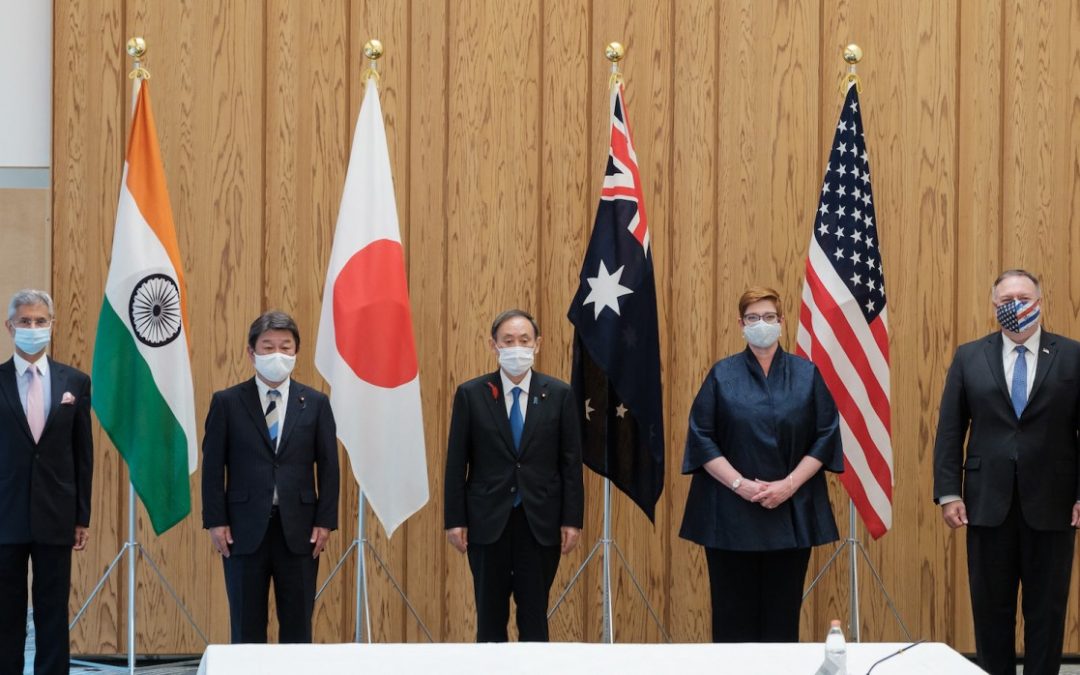 While the American press is fixated almost entirely on the US presidential election, very important developments are occurring all over the world. Recent posts have followed the expanding historic “Abraham Accords” in the Mideast which are creating a new anti-Iranian alliance involving Israel and the Sunni Arab nations. This post will focus on the steady strengthening of the new “Quad” alliance against China in the Indo-Pacific region. The “Quad” refers to the increasing military and political cooperation between India, Japan, the USA and Australia to confront the growing threat from China.

The USA and India have just signed an important agreement that draws these two nations much closer together in a position of mutual trust. The pact calls for joint intelligence sharing, and will include the USA sharing with India intelligence it gathers from its extensive satellite system. One consequence of the agreement is that the very accurate satellite data India will receive from the USA will enable India to aim its weaponry at targets inside China with much greater accuracy. This is important as it will give India more deterrence credibility in its relationships with China and Pakistan. An examination of this new agreement and how it documents an ever-closer military relationship between India and the USA can be found in the first link and second link.

The third link covers a recent formal gathering of top officials of the four Quad nations to further their growing alliance. It was held in Japan, and hosted by Japan’s new Prime Minister, Yoshihide Suga. The USA was represented by Secretary of State, Mike Pompeo. One objective of the meeting was reported to “institutionalize the loose alliance” the four nations now have. In other words, the alliance will become more cohesive and coordinated. Another step is the accelerating pace of joint military exercises these four nations are conducting to enable their forces to act together with more military efficiency as an alliance. The fourth link details the upcoming Malabar naval exercises in the Indian Ocean in which the navies of the four Quad nations will conduct joint maneuvers to enable their naval forces to conduct activities that enable them to coordinate their activities across technical and language barriers, encourage interoperability between the navies, etc. Such maneuvers are not just an important symbolism. They are essential in order to prepare allied fleets to work together with maximum efficiency in the event of war. The fifth link offers information about another Quad naval exercise held earlier this year. That exercise involved conducting naval maneuvers simultaneously in the Philippines Sea and the Indian Ocean. Clearly, this exercise involved preparing their respective navies to coordinate effectively in a war involving a large maritime area (a situation which would be almost a certainty in any war with China). China is obviously watching these military exercises with keen interest, and that is exactly what the Quad nations want. The more it becomes evident to China that the Quad nations’ military forces are enhancing their readiness to defeat China in a war, the more it increases deterrence and lessens the likelihood of war breaking out.

More developments are occurring indicating the Quad alliance is gathering strength. The sixth link reports the USA is deploying Coast Guard cutters to the Indo-Pacific region to police the fishing zones to deter and prevent Chinese provocations against other nations. The seventh link describes naval exercises where US Ospreys (a hybrid helicopter/aircraft) practice landings and take-offs on a Japanese destroyer. US Ospreys are used in US Marine Corps and special operations actions. Having them practice being able to operate from Japanese naval ships will greatly increase their effectiveness and survivability in combat. If they can operate effectively from Japanese destroyers, they can easily operate from the new Japanese carriers as well. There are doubtless other naval maneuvers and exercises which are not disclosed to the general public or media.

Other actions are being taken which indicate that the war-planners of the Quad alliance have decided that Taiwan cannot be sacrificed if China decided to invade that island democracy. The USA is clearing the sale of many hundreds of anti-ship and ground-attack cruise missiles to Taiwan as well as other types of military equipment (eighth link). These missiles would enable Taiwan to hit and sink numerous Chinese naval ships if they launched an invasion across the Taiwan Strait in the future.  While the USA is taking the lead role in arming Taiwan, I sense that this is part of an overall Quad strategy to defend Taiwan if it is attacked. Taiwan has a very strategic geographical position. It can act as an unsinkable aircraft carrier for Quad military forces, and Japan, the Philippines and South Korea would become much more vulnerable if Taiwan fell to Chinese forces. It would also make US bases in Guam and other locations much more vulnerable if Taiwan were lost to the Communist Chinese. The Chinese have predictably protested this reinforcement of Taiwan’s military abilities (ninth link), but it is essential if the Quad nations wish to deter a Chinese attack on Taiwan and preserve the status quo.

The above developments are all testifying to a decision on the part of the four Quad nations to oppose any further Chinese military adventurism. It also sends a message to the smaller Indo-Pacific nations that the Quad alliance is going to be a lasting force to be reckoned with and that it will encourage other nations to become allied to it. Such nations include South Korea, the Philippines, Vietnam, Singapore, Indonesia, etc. One complicating factor is the US presidential election, which leaders in all nations will surely be watching closely. A Trump victory will ensure the cohesiveness of the Quad, but a Biden victory will call it into question given the Biden family’s close financial ties to Chinese leaders. Having recently written about the US elections, the final link offers an opinion from a reliable source which has long followed US politics that Trump will win the election, and it gives the reasons which support that prediction. I urge readers to review it as it contains good information, in my judgement.

The development of the Russian-Chinese-Iranian alliance and the alliances of the Quad nations in Asia and the NATO nations in Europe was actually prophesied in a very ancient source: the latter-day prophecies of the Bible. Ezekiel 38-39, Joel 2, Genesis 48-49, etc. have much to say about modern world events that were predetermined millennia ago by a Divine Creator. In order to see the biblical evidence that we are indisputably living in the latter days of our age, please read my article, Are We Living in the Biblical Latter Days? For a specific discussion of the global World War III that biblical prophecies predict and describe, please read my article, What Ezekiel 38-39 Reveal about a Future World War III. My website has articles that pertain to the prophesied roles of two of the Quad members. Please read my articles, The USA in Biblical Prophecy and Japan’s Role in Biblical Prophecy for an examination of how they are identified in Bible prophecy. Vital to applying biblical prophecies to current events is identifying the supposedly “lost” tribes of Israel among the nations of the modern world (Genesis 49 and Revelation 7 declare they will be found among the nations in our time). My books on this subject are very extensive and are based both on accepted secular historical sources as well as biblical prophecies. They can be obtained at the home page of my website. International readers obtaining the books should direct their inquiries to a publisher’s address, bibleblessings.net, where international shipping options can be selected on-line.

While the Quad’s efforts to deter and/or win a war with China are to be applauded, biblical prophecy reveals such a war will occur at the very end of our latter day period. While biblical prophecies reveal such a war will be part of a global World War III at the end of our age, those prophecies do not preclude the outbreak of an earlier regional war in the Indo-Pacific region between China and the Quad nations. China may actually want a limited, regional war so it can test its military weaponry and troops under real combat conditions and to test their new weaponry against western defenses. China may logically not want to launch directly into an all-out war without first testing whether their weapons can defeat western weaponry. Given the competing interests and the rising acrimony in the Indo-Pacific region, such a regional war could start at any time.