The Possible Dangers of an EU Army 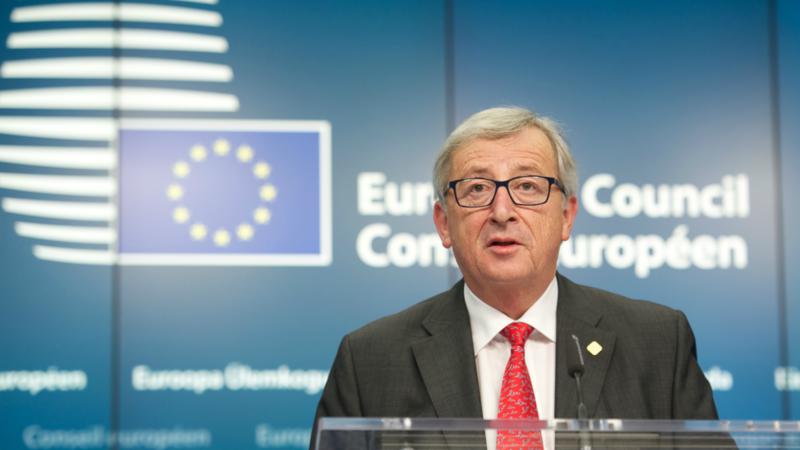 There have periodically been reports that the EU nations may be planning to create their own EU army, which would have its own military weaponry and a command structure separate from Europe’s NATO forces. This possibility seems to be gaining more traction. The EU Commission President, Jean-Claude Juncker, has openly favored the idea of an EU army (first link). I wonder: Would he be its Commander-in-Chief? The second link states that Germany, under Chancellor Angela Merkel, favors this idea as well.

Perhaps the Germans have long been dragging their feet on living up to their NATO pledge to spend 2% of their GNP on military weaponry because they would rather devote such additional spending to an EU army instead of to NATO forces. The concept of an EU army draws mixed reactions across European nations. The third link reports that Czechoslovakia favored the concept, but that Ireland and other non-NATO European nations are leery of it. There are many cross-currents inside European politics that involve the EU, NATO, the risks of taking in more Islamic migrants, etc. Although the second link states Czechoslovakia favors the concept of an EU army, the fourth link adds that Czechoslovakia has joined Poland, Hungary and Slovakia in openly opposing the EU by refusing to take any more Islamic migrants. Since the EU’s open-door policy toward Islamic migrants seems crafted by Germany and the EU bureaucrats, Czechoslovakia is opposing Germany and the EU on one hand and seemingly  supporting it on the other hand. The nations acting to protect their own sovereignty and culture by refusing to accept more Islamic migrants may be fined by the EU for doing so. I’m not sure what enforcement mechanisms the EU has in imposing its will on member nations, but the creation of an EU army might give it just such a mechanism for compelling compliance by member nations to the directives of EU bureaucrats. For example, in a recent post, I wrote that Hungary has built a southern border fence to keep Islamic immigrants out of Hungary. If there were an EU army, would it be ordered by Merkel and Juncker to wage war on Hungary to stop it from building its border fence? That is the real heart of the question about an EU army. Would it be a threat to European nations and European people? Let’s talk about this issue.

While these links speak of the need for an EU army for external protection for its members, the question also exists whether such an army would be used to militarily enforce dictates from Brussels on all EU member nations. If the EU tried to use its own army to invade a member EU nation to impose the EU’s will on it, could the invaded EU nation invoke Article 5 of the NATO charter and declare that it has been invaded–requiring all NATO members to help it wage war against the EU force invading it? Such a bizarre situation could result in NATO forces fighting EU forces inside Europe, with European nations picking and choosing whether to fight on one side or another or try to stay neutral. The United States, which is in NATO only, would fight on the side of NATO forces…or try to stay neutral.

Let’s consider that the biggest economy inside the EU is Germany’s, that Germany dominates the EU, and that Germany is a big backer of an EU military force. Would an EU army simply be an indirect way for Germany to dominate all of Europe? Nations inside Europe who vividly recall World War II might be reluctant to have a German-dominated EU army come into being. Would it become a de facto 21st century German/EU Wehrmacht? If the EU’s internal dictates to member nations were imposed by an internal EU army, would its main function prove to be that of an internal “EU Gestapo” instead of an external protection force for Europe? Indeed, since Europe already has an external protection force in NATO, why would an EU army be needed to perform the same role? That would be redundant and having different command structures for both NATO and EU military forces would be exceedingly confusing for all nations that are in both the NATO and the EU. Many European nations surely realize that an EU army could not protect them from Russia, but a US-backed NATO can deter a Russian attack. In the post Brexit world, British military forces and its nuclear weapons would be in the NATO command structure. These facts make NATO inherently more effective an external military force than any EU army. Since Europe already has NATO as an effective external protection force, it argues that an EU army may actually be intended to be an internal force to impose EU directives on member nations. I hope that we do not ever reach the day when EU internal military forces in each nation report to a local EU “Gauleiter” instead of the local elected national governments.

If an EU military force gets created, there is a critical question: Who controls the nukes now in the French and British arsenals? Due to the Brexit vote in the United Kingdom, it seems clear the British nukes will stay under British control. If the UK had stayed in the EU, there would be an active issue of whether the EU would take control of the British nuclear warheads just as there is now a question of whether the EU or France would control French nuclear warheads. The fifth link and sixth link examine the complexities of NATO and/or EU control of NATO’s nuclear warheads. The final link includes a map of the known locations where NATO and Russian nuclear warheads are now stored or based in the Eurasian theater. The USA bases some nukes in various NATO member nations. If an EU military force was formed, would US nukes have to be stored/based only on the territory of non-EU NATO nations for safekeeping? The final link also makes a brief reference to Japan being within “a screwdriver’s turn” of having nuclear weapons–something I have suggested was the case in previous posts. Germany is just as advanced technologically as Japan. Might Germany also be already within a “screwdriver’s turn” of having nuclear weapons as well? The link also suggests that preparations for an EU military force may have already proceeded further than has been admitted to European populations.

The final link also shows there are major issues troubling NATO from within. It asserts that NATO Secretary-General Jens Stoltenberg, gave “over 584 million Kroner” to the Clinton Foundation while he was Norway’s Prime Minister. If he did, was that legal under Norwegian law? It also asserts Chancellor Merkel is an ally of Hillary Clinton. I wonder what arrangements and quid pro quos were already negotiated in anticipation of Hillary Clinton being elected US president, and which are now in jeopardy of either not happening or being exposed now that Donald Trump was elected president? NATO does have an auditing arm to keep track of NATO’s funds, armaments, etc., but, alas, the last link states the Chief NATO Auditor was found dead in a suspicious “suicide.”  Readers are free to draw their own conclusions after reading the final link.

I would like to also mention that there is a huge matter which is not discussed in these links. While the NATO-USA relationships are discussed, nothing is said about how Russia might view the creation of an EU military force on its western border. Russian foreign policy is often called paranoid. However, try to look at history from a Russian perspective. Twice, under Napoleon and then under Hitler, Russia was invaded from Europe and was almost conquered, surviving the European onslaughts due to the Russian winter and the USA and UK helping it vs. Hitler’s Germany. Russia has a right to feel sufficiently “paranoid” to watch very closely what happens inside Europe. I believe Russia views NATO as largely a predictable entity as long as it is dominated by the USA. However, an EU military force, with no US restraint on it, would be viewed much more suspiciously by Russia, in my view. Especially here in America, we do not realize how horribly the Russian people suffered in World War II, losing a very significant part of their population and territory until Russia could turn the tide helped by Hitler’s military blunders. If America had been invaded by Japan and lost its territory all the way to Denver and many millions of Americans were killed fighting to regain control of the western USA, we’d understand how Russia views Germany and Europe. If I were Putin, I’d have the FSB (the old KGB) monitoring every aspect of the creation of an EU military force and I’d especially have them keep tabs on every NATO or suspected nuclear warhead in Europe. I do not believe Russia’s generational memory would allow Germany to ever have control of nuclear weapons without US oversight. If I were Putin, I’d have nuclear-tipped supersonic cruise missiles secretly based in Kaliningrad and aimed at every major German military base and any other location that could have EU nuclear weapons stored or based at it. Maybe Putin has already secretly done this. I’m sure the nations are not talking about these things publicly.

Just as Israel has said it will never permit Iran to have nuclear weapons and the USA and Japan have said North Korea cannot develop or have deliverable nuclear weapons, Russia may have decided that Germany cannot be trusted with them either. In all three of these cases, pre-emptive strikes may occur if the perceived risk becomes too great. Germany and the EU ought not be looking westward at the USA for a threat to a planned EU military force; I think it had better be looking eastward to Russia regarding how such an EU military might be perceived.

Many Christians who follow biblical prophecies feel the final “beast” leader and anti-Christ will emerge from inside Europe. I do believe they will emerge from within the western world’s nations, but I make no predictions regarding their nations of origin. What is happening inside Europe should cause concern in many locations around the world. Europe is in ferment and divided within itself along many political and socioeconomic fault lines. A major crisis of some kind could cause changes to occur that are not now possible.

I want to thank a reader for sending me one of these links.