The New Technology of “Holoportation” and Biblical Ramifications 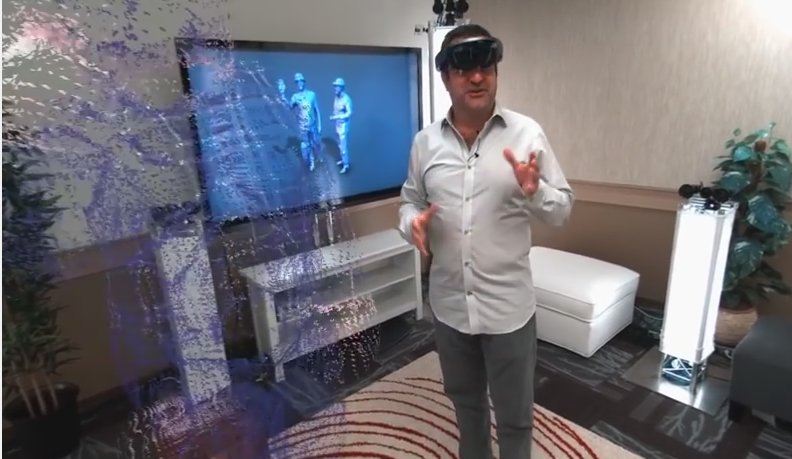 Just when I think I’ve caught up on technological advancements, something new and incredible comes along. This post is about a cutting-edge new technology called “holoportation,” which is a method of using holographic projections of real people which can be sent “anywhere in the world so you can talk and interact with” (first link) anyone who is similarly equipped with holoportation technology. This, to me, looks like an example of Star Wars and Star Trek science fiction technologies coming into fruition, and I believe it has very possible biblical prophetic ramifications.

The second link offers a detailed description of this new technology, which is most remarkable. It involves a “3D capture technology” which, for example, could create a holographic image of you and then project it to somewhere else where you can see, hear and interact with either a real person or, presumably, another holographic image of someone else via the eyes, ears and mouth of your holographic projection. This technology is filmed in real time so you can see it demonstrated on these links.

Let’s consider some science fiction themes which are starting to come into reality. For Star Trek fans, remember the holographic “Doc” of the Star Trek Voyager series? This current technology could, essentially, turn a real physician into a holographic projection of himself and see and treat patients via his holographic projection in a medical facility equipped with the appropriate “holo-emitters,” to use Star Trek terminology. Star Wars fans will see remarkable reminders in the second link of scenes from Star Wars movies. Remember the scenes where a holographic image of Obiwan Kenobi appears via a miniaturized hologram and reports to and interacts with the Jedi Council…or the scene where Princess Leia uses a miniaturized holographic projection of herself to beseech an older Obiwan Kenobi for help against Darth Vader? This new holoportation technology makes this kind of holographic communication with real people to be something which can now be done in our modern world. It can even be recorded as a “living memory” and revisited.

That this much is being revealed to the general public makes me think that this technology has been available for some time already and is just now being revealed in a “kinder, gentler” way to the public. Think of the uses that this technology could have in the world. Using holographic avatars of themselves, the leaders of the G-7 nations could hold clandestine conferences in a secret meeting room equipped with holographic, 3D-capture technology without actually leaving their offices. Central bankers and financial market insiders could use this same technology to conspire to set interest rates, fix market behaviors, etc. without ever leaving their penthouse office complexes. Military operatives or civilian spies, equipped with this technology, could “report back” to their agency heads re: clandestine activities via holographic projections of themselves. The “movers and shakers” of the world could already be meeting in holographic encounters like these without the media or anyone ever knowing about it.

I can think of at least two biblical prophecies which could be fulfilled via this technology. In a recent post, I discussed how robotic and “geminoid” technology could fulfill the cryptic prophecies in the book of Revelation that there will not only be a “beast” but also an “image of the beast” (Rev. 13:13-15, 14:9-11, 15:2, 16:2, 19:20 and 20:4). The Apostle John had to use low-tech vocabulary to try to describe what he was seeing in a vision of our high-tech latter days. If John was foreseeing “holoportation” technology usages where the final, human, global political leader, called “the beast” in the Revelation’s prophecies, projects holographic images of himself around the world to appear to world leaders or global audiences in rooms equipped with this 3D capture technology, it would certainly fulfill John’s prophecy about a real “beast” leader and something that was not actually real but was an “image of the beast.” It triggered a thought in my mind. Remember a few years ago when the American population was “ordered” to surrender their analog TVs and buy digital TVs instead? The digital TVs could be monitored by the NSA and other intelligence-gathering agencies in a way analog TVs would not permit. Is it possible that in a future year, everyone will be “ordered” to surrender their digital TVs to have holographically-equipped home theater systems installed in their living rooms so the future prophesied “beast” leader can address, via a live “image” of himself in a distant living room, either an individual, a small group or perhaps everyone in the world at a single time? Revelation 14:9 indicates the global population, duped by this technology, will be required to “worship” the beast and “his image.” Since the holographically projected image of the beast can “see” if people are actually doing obeisance to him in their homes and offices, the names and addresses of anyone not “worshiping” the “image of the beast” could be instantly recorded. What a scary example of how this technology could become very Orwellian.

Another scenario is also very possible. This technology, combined with such technologies as invisibility “cloaks,” audio-displacement, etc., could be used to fake the return of Jesus Christ. II Thessalonians 2:1-11 prophesies that the latter-day “man of sin” will arrive to dupe the world with satanic power, signs and “lying wonders” (verse 9). This verse indicates some miraculous events will be done via demonic power, but that some “miracles” will be “lying” wonders. The Greek word translated “lying” is “pseudos,” which means “lie” or “falsehood.” In other words, some “wonders” (miracles) will be high-tech tricks to deceive the masses. With more refinements to the holoportation technology and invisibility technology, one could fake the return of Jesus Christ and the appearance of “angels” manifesting in and out of invisibility cloaks, etc. The holographic “Jesus” would actually be an actor projecting his “image” from a remote location, but able to interact via his holographic avatar with those on the scene. The phony Jesus could anoint the beast and false prophet to be his designated appointees to govern the earth in a pseudo-“millennium,” and then retreat into a “secret chamber” where only the beast and false prophet could visit him. II Thessalonians 8 foretells that that the real Jesus Christ (the Lord) will destroy the “man of sin” with his “Coming” (Greek: “parousia”), but that the imposter Jesus and his human operatives will arrive on the scene via an earlier phony “Coming” (“parousia”) of their own.

Ever wonder why Jesus Christ warned in Matthew 24:22-27 that the “false Christs” and “false prophets” will arrive on the scene and deceive the entire world except for “the very elect” (verse 24)? The arrival of the great deception will include “great signs and wonders” just as II Thessalonians 2 warned. Matthew 24:26 specifically warns Christians to NOT believe it if any such “false Christ” arrives in a desert/wilderness location and then enters some kind of “secret chambers.” Why would he prophesy such a location as that? Perhaps a holographic projection set will be built in a remote desert location somewhere and the media and global figures will be invited to witness a great event. What they might see is the staged and phony “return of Jesus Christ” perpetrated by technological “wonders” to fool the masses who will see it on remote visual media. Verse 27 reminds us that the real return of Jesus Christ will be like the lightning shining from one horizon to another, and that Christians should not be fooled by any staged event in the desert that appoints human leaders to rule the world instead of a true Jesus Christ. Revelation 19:11-20:4 foretells the real return of Jesus Christ will include his execution of the human leaders called the beast and false prophet, the annihilation of all their armies as well as the resurrection of all the dead saints who have ever lived and their installation as rulers over all the nations. Until that happens, you have not witnessed “the real deal.” Remember that when the prophesied time of great deception engulfs the world in the future.