THE MIDEAST IS JUST ONE SPARK FROM OPEN WARFARE 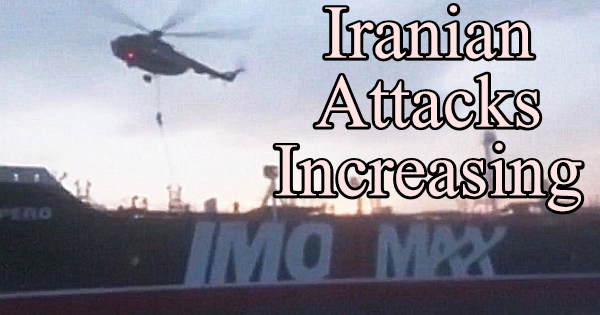 Readers have, I’m sure, been following developments in the Persian Gulf and Mideast that indicate that the world is sliding toward a crisis in that region. The provocations from Iran are so great that a Mideast war seems almost inevitable at this point. This post is to document how close the region is to warfare and to provide some information you may not have seen in your regular media resources.

To review, there have been six oil tankers attacked by mines or explosive devices in recent weeks in the Persian Gulf region. Iran has shot down a US drone and a US warship then shot down an Iranian drone. Iran has hugely escalated the military confrontation by seizing two oil tankers owned or flagged as British vessels. Iran thinks that it is acting in response to the British stopping a tanker near Gibraltar for a suspected violation of sanctions against Iranian oil being shipped to Syria. However, there is no moral equivalency here. The UK is not under any sanctions for any misdeeds or evil intentions. The Iranian regime is under many sanctions for its actions, not the least of which is its efforts to develop nuclear weapons. Since it has threatened to “wipe Israel off the map,” Iran is a dangerous, rogue nation which cannot be allowed to have any weapons of mass destruction to create a new Holocaust against the Jewish people.

The first two links offer details of the Iranians’ seizure of the two British-connected tankers–one of which was released and the other is still in Iranian hands. The crew of one tanker has been at least temporarily kidnapped by Iran. While the UK has threatened serious consequences if the tanker is not promptly released, the first link includes a statement by the British Foreign Minister, Jeremy Hunt, that Teresa May’s government is not considering any military action. Someone needs to give Mr. Hunt a backbone. By washing his hands of any military action, he has ensured that the Iranians will laugh at May’s government and ignore it completely. Hunt’s very weak response will only serve to further embolden the Iranians. The second link cites the fact that Saudi Arabia and Oman have urged Iran to release the tanker. The third link adds more information on the Iranian’s clearly intentional seizure of the British tanker and the fourth link shows the operation in progress as Iranian commandos rappelled on to the deck of the stolen tanker. The third link reports a US warship with 2,000 marines and attack helicopters entered the Persian Gulf to put more Western “muscle” in the area.

I have a serious question of how a British oil tanker came to be unprotected and subject to being stolen by the Iranians. Something very odd allowed this oil tanker to be seized. The fifth link relates that a British warship was close enough to the seized oil tanker to warn the Iranian hijackers away, but the British warship ultimately did nothing to protect the tanker. One wonders why there was no follow-up of any kind by the British warship. Were they ordered by the British government or their military chain of command to not help the tanker? The sixth link shows that a British warship did intervene to prevent an Iranian hijacking of a threatened vessel not long before the British navy refused to come to the aid of the seized tanker. What changed? The British Defense Minister is cited on one of the links as defending the British decision not to defend the tanker, but he comes across as just another weakling in May’s British government, in my opinion. Thankfully, the British government will soon have “new management.” The weak and indecisive government of Teresa May is about to leave office, and, as this post was being written, Boris Johnson was the favorite to become the new British Prime Minister. He clearly needs a new Foreign Secretary and a new Defense Minister so the new British government is not a backbone-free zone. Boris Johnson is on good terms with US President Donald Trump, so a more muscular American-British stance is likely in the Mideast.

President Trump is taking action to prepare for a military conflict with Iran even as he has bent over backward to avoid confrontation. After the Iranians shot down a US drone, the US was within mere minutes of a retaliatory military response when Trump canceled it because he felt it might take too many Iranian lives. When Trump sent a flotilla of six more US warships into the Persian Gulf just days ago, there was a very tense and close encounter with Iranian military forces that could easily have led to open conflict. Iran seems to be spoiling for a fight. The seventh link offers details of that encounter as well as the information that the US Navy now has 21 warships in the region, including three that carry warplanes of various types. That link has an interesting photo of a US Marine Corps armored ground vehicle parked at the edge of a flight deck to train its gun at the surrounding sea. Since the Iranians use swarms of armored small craft to attack vessels, it is smart to position additional firepower from Marine Corps armored vehicles on the flight deck to add more guns to repel any Iranian swarm attack. The eighth link adds that the USA is also sending troops and Patriot missile batteries into Saudi Arabian positions to prepare for a regional war if it does erupt. I also believe that there are now B-1 and B-2 bombers on quick alert status at Diego Garcia and other air bases in the region to quickly respond with bombing attacks on Iran if Iran does provoke a war.

The final link may give us an insight into why the Iranians are acting in a way that seems designed to provoke a military conflict. Hezbollah in southern Lebanon is a proxy force for Shiite Iran, and it reportedly has 100-150,000 missiles and rockets aimed at Israel. These missile forces are now under the direct command of an Iranian officer. if a major war breaks out, Iran may give the “green light” to Hezbollah to launch a huge missile attack at Israeli targets to devastate the Israeli nation. This could cause immense damage to Israel’s nation and it would be intended to be so massive an attack that it would implement Iran’s stated intention to “wipe Israel off the map.” Iranian aggression in the Persian Gulf may be merely an effort to create a military conflict to give Iran an excuse to launch a major war against Israel. The danger of war is very real. All that is needed is for the Iranian regime to call the Iranian officer in charge of Hezbollah’s missiles to launch them into northern Israel and the war will begin. Israel surely must know this so I do wonder how long they can wait to launch a preemptive strike vs the Hezbollah missile-launching regions. If Iran were to severely wound Israel, you can be sure Israel’s military will severely wound Iran. If it becomes necessary to use nuclear warheads to preserve the Israeli nation’s survival, there is no doubt the Israeli government will use them to do so. It may not be Israel that gets “wiped off the map.” It may be Damascus, Iranian cities and the Iranian nuclear weapons and oil-shipping facilities that are wiped off the map.

We may be heading toward a major event in the Mideast. I have no doubt that the Israeli nation will survive any war. Zephaniah 2:1-11 prophesies that God will not only establish the Jewish nation in the Promised Land in the latter days but that God would also be watching Israel’s enemies who mass at Israel’s “border” (verse 8) in the latter days. God promises to be “terrible” to the enemies of Judah in the latter days (verse 11). Zechariah 12:1-10 also promises God will defend Judah (the Bible’s term for “Jews”) and Jerusalem in the latter days, and Zechariah 14 foretells how God will smite the enemies and invaders of Judah’s territory in the final battle of a future World War III that ends our age and provokes divine intervention to set up the Millennium/Messianic Age. Zechariah 14:12 foretells God will ultimately save the Israeli nation by giving its enemies the death portrayed in the movie, Raiders of the Lost Ark when a detachment of Nazis had their flesh consumed and melted off their bodies while they yet stood. That is actually going to happen in the future…at a time of God’s choosing.

If you would like more detailed information about the Israelis/Jews in history and prophecy and would like to see detailed evidence that we are truly living in the biblically-prophesied latter days that will conclude our current age, please read my free articles, Four Reasons the Jews are Judah, Khazars and the Modern Jews, and What Ezekiel 38-39 Reveal about a Future World War III. I want to stress to readers that I am not predicting an age-ending World War III at this time; however, I do think a major regional war is looking more inevitable unless the situation is defused soon. There have been periodic warnings that Hezbollah has infiltrated sleeper cells into the USA (and perhaps Europe) to activate them against high-value American and European targets if a Mideast war erupts. Americans and Europeans must be prepared to have their homelands be involved in a Mideast war if it happens. Given the fact that the Democrats/leftists are preventing the USA from protecting its southern border, if Hezbollah cells kill Americans as part of a major Mideast war, you can be sure the US southern border will be shut down “hard” if Hezbollah has used our porous borders to send its agents into the USA to attack US targets as soon as Iran gives them the word to do so. We do live in perilous times.