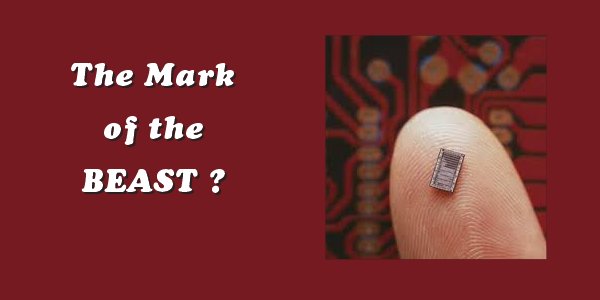 Not many days ago, I wrote a post about the fact that the “chipping” of human beings in their hands has begun on a trial basis. This story has such powerful biblical ramifications that the USA Today publication wrote a front-page story about the possible connections between the book of Revelation’s warning about the “mark of the beast” and the trial “chipping” of company employees that has begun in the state of Wisconsin. I suggest readers of this post first read my recent post on this subject for background information on this topic.

Below is the link to the USA Today article that was a front-page, featured article in today’s USA Today insert in my local Sunday newspaper. The print version of the article was entitled: “MARK OF THE BEAST?: Microchipping employees raises apocalyptic questions. It certainly does raise those questions. The fact that an anciently-written Bible prophecy has such relevance to a modern technological development that even the mainstream media can’t ignore this connection is news of itself. The article discusses the prophecy found in Revelation 13:16-18 without actually citing that specific passage; however, it does include the comments of various religious commentators on how this “chipping human hands” development may or may not fulfill this biblical prophecy. Whatever the intent of the company making these chips, it is obvious that this technology can easily be adapted in the future to fulfill the prophecy in Revelation. It is my view that this preliminary chipping the hands of a company’s employees (and publicizing it in such a major publication as the USA Today) constitutes a trial run to gauge (A) the accurate functioning of this smart chip technology inside human flesh, and (B) the willingness of people to accept the chip. The article’s implication is that it is Christians who take the Bible literally who will be resistant to accepting any such chipping of their hands. The USA Today is correct to assume such a view on the part of many Christians.

The chipping of human beings is being marketed as a “way to increase convenience” and we are assured that the chips “are not equipped with GPS tracking abilities.” That may be true now, but once people are acclimatized to accepting chips in their bodies, it will be a small step to having future versions of the “human chip” equipped with GPS tracking capabilities. Once humans are equipped with such GPS-enabled trackers, they will all be as easy to locate in 24/7 real-time surveillance as were the “tributes” fighting inside the Hunger Games gladiatorial arena who could be tracked constantly by the evil forces of The Capital’s Games Makers. [Fans of the Hunger Games movies will all instantly understand my point–others will need to read the books or see the movies to fully appreciate it.]

The article also indicates that the forces of “globalism” are pushing this chipping technology as are those who want to “see payments go cashless.” A global cashless system in which all people would have to have embedded chips to conduct business transactions would certainly be the very kind of technology that would fulfill the prophecy in Revelation 13. I urge readers of this post to examine the information in the USA Today’s article!

I’ll add a few comments about the prophecy in Revelation 13:16-18. Note that the prophecy does not foretell that all human beings on earth will be chipped with an electronic device and/or tracker in their right hands. Verse 17 prophecies that everyone doing business in the beast’s eventual financial/economic system will have to have one of three things to be able to do so. They will have to (A) have the mark in their right hand, (B) have “the name of the beast” on them somehow, or (C) have “the number of his name” on them somehow. This prophecy allows for people to object to having a mark in their right hand and still be part of the beast system via participating in one of the two other methods (which are not fully clarified in the prophecy). Verse 16 also allows for this prophesied “mark” to be placed in people’s foreheads instead of their hands. Keep these alternatives in mind as you witness how things unfold in future years as these prophecies get fulfilled. There are other possible fulfillments for this prophecy in Revelation, but this post is intended to address the possibilities raised by the human chipping technology which is the subject of the USA Today article.

I’ll close with one other comment. Intrinsic with this latter-day “mark of the beast” will be an aspect of one being required to “worship” either the beast or his image (Revelation 13:12 and 15). Until there is a global system that actually links access to the world’s financial/monetary system to some kind of act of fealty to a global governmental/political leader and a global religious/spiritual leader (the beast and false prophet of the book of Revelation), I don’t think the electronic chipping of people will have risen to the level that is prophesied in Revelation 13. Somehow, the act of taking an embedded chip or having some other kind of data connection to the global financial system has to include an attitude of “worship” that would violate the First of the Ten Commandments forbidding any kind of idolatry. At some point, the latter-day timetables will reach that point. We are not there yet. As this world proceeds down the path to the end-game of the biblical latter day prophecies, expect more biblically-related stories to be found in the mainstream press…but with their establishment “spin,” of course.