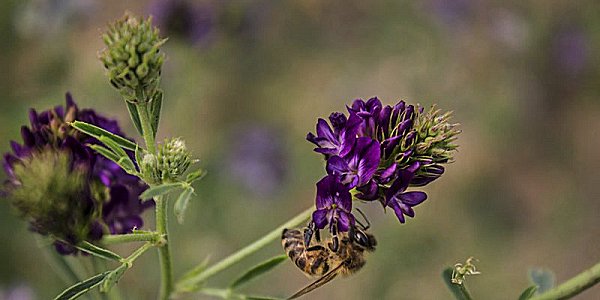 It has been some time since I’ve posted on the bee die-off crisis called Colony Collapse Disorder (CCD). It was an AP article reprinted in my local newspaper which has prompted this post. This article is included as the first link, which identifies North and South Dakota and parts of surrounding states as the last location where bees are still available in commercial numbers. This is my region of the nation. The article warns that the growing trend to plant endless amounts of corn and soybeans in the Midwest and Plains states of the USA is a contributing factor in the honeybee decline. Government agricultural-use laws have caused so much loss of honey-bee-friendly terrain that it is estimated that 629 square miles of prime honeybee habitat has been lost–and that is just in what is deemed the last bastion of healthy honey bee hives. The honey bees need pollen from wildflowers and living plants and modern agricultural practices are steadily destroying honey bee habitats in the pursuit of more profits.

I can personally attest that what the article asserts is true as I witness it whenever I drive in the Midwestern countryside. There are now endless fields of corn and soybeans with only occasional plots of alfalfa or other crops. When I was young, this region of the nation had soybeans and corn, but there were also many fields planted with oats, sorghum, sugar beets, alfalfa and other crops. When I was young, there were ditches full of uncut grasses that were ideal for wildlife, and gophers and other small creatures were everywhere running across the roads when one was driving on gravel or dirt roads. Now that we have had decades of chemical farming practices and “fence-to-fence” planting of crops, the tearing out of shelter-belts to plant more (you guessed it!) corn and soybeans, it is rare to see such creatures at all. Pheasants used to be everywhere and hunters came from all over the nation to hunt the millions of pheasants roaming in rural South Dakota. Now I rarely see one when I’m driving in a rural area. There used to be endless numbers of Meadowlarks on power wires, fences, etc. and I grew up to the distinctive sound of Meadowlarks all over our state. I have not heard or seen one now in years. In the effort to maximize production of corn and soybeans, farmers have inadvertently been waging a kind of chemical and land-use war against wildlife, birds, and honey bees.

Some recent readers may wonder why any of this matters to them; especially if they live in cities and do not comprehend much about how fragile the nation’s food production system really is. The first link states that pollinators such as honey bees are “crucial pollinators for 90% of the nation’s flowering crops.” That means a lot of fruits, vegetables, nut crops, etc. won’t be showing up in your grocery stores if the honey bee pollinators die off much further. California, for example, produces vast amounts of the nation’s vegetables, fruits and nuts, but the agricultural industry in California often depends on Midwest honey beekeepers driving their bee colonies out to California growers’ fields to pollinate them during the crop’s flowering seasons. Once one crop is pollinated, beekeepers can move on to another crop whose flowers are coming into season. If beekeepers have their hives die off due to CCD, they will be unable to transport their bees to California (or anywhere else). If the crops are not pollinated, they will not produce fruit, vegetables or nuts, or they will do so in such small volumes that you may only occasionally see fresh produce in your grocery aisles. Other insects, small birds and other creatures will accomplish some pollination of crops, but without honey bees, the pollination rates of all crops will drop off dramatically.

Colony Collapse Disorder has many possible causes. A German source proposes that the widespread use of herbicides, monoculture (think endless fields of corn and soybeans stretching to the horizon in all directions) and genetically-modified (GM) crops could be responsible for the bee die-off (second link). Notice that this link was originally written in 2007 when the CDC was far less serious than it is today. The third link (from 2014) proposes pesticides and chemicals such as neonicotinoids, 2-4-D, and glyphosates for contributing to die-offs of not just bees, but also birds, butterflies and fish as these chemicals unnatural to the earth’s normal ecosystem become ubiquitous in the environment. The fourth link, a British media source from 2007, warned how bad the honey bee die-off could get and it offers a longer list of vegetable crops that need honeybees and other pollinators to produce a crop.

The widespread honey bee die-off predicted for approximately the last decade is now well under way. The first link reports that the Dakotas and Minnesota which used to be “the last best place for bees,” have now become “the least worst” place for bees in the USA. Clearly, honey bees are a critical link in our food chain and they are steadily disappearing. Honey bees are also like the proverbial “canary in a coal mine” in that they are indicators of the overall health of an ecosystem. Lots of healthy honey bees mean a healthy ecosystem is in place. When honey bees start dying off in large numbers (as is now happening), ecosystems are in decline.

Since the ability of the few remaining honey bee hives to pollinate agricultural croplands is now stretched to the limit, any further loss of honey bee hives could mean a sudden and substantial decline in the production of vegetables, fruit and nuts in the nations affected by CCD. If you want to help save the bees in your area, plant lots of flowers with pollens friendly to bees (any garden shop should be able to help with those choices). Mankind is facing a looming food crisis due to all the manmade changes in the agricultural ecosystem that are destroying the fragile food supplies of the honey bees. I do not know what year the major crisis will hit, but the honey bees are now at their last line of defense in many ecosystems. When the honey bees are gone, those ecosystems will produce little or no vegetables, fruits or nuts…and people will go hungry.

The Bible predicted that in the latter days of our age, there would be food shortages (Matthew 24:7) and that reduced food supplies would be rationed by price (Revelation 6:5-6). A continuation of the honey bee decline  could, all by itself, cause such a food shortage. Other causes could include droughts, floods, hurricanes, etc. One global cause for a famine that could strike suddenly would be a major volcano eruption on the scale of the historical Krakatoa or Timbura eruptions. These major eruptions throw so much particulate matter into the upper atmosphere that sunlight is reflected away from the earth–causing global cooling, shortened growing seasons and crop failures. This is an unpredictable cause, however. The die-off of the honey bees is happening on a predictable basis and, predictably, mankind will pay little attention to the problem until hunger sets in due to dramatic reductions in food supplies because of the bee die-offs. If mankind experiences a global food shortage due to bee die-offs, as now seems increasingly inevitable, mankind’s lust for short-term profits will have caused the nations to not react to this crisis quickly enough.

Since a food shortage due to the bee die-off is predictable, I urge readers to make appropriate preparations for such an eventuality. My free article, Should Christians Prepare for Future Hard Times?, offers a biblically-based, common-sense approach to making such preparations and includes government suggestions on what to store for any kind of emergency situation. Obviously, in order for the biblical prophecies about the latter-days or end-times to be applicable to our modern times, we must be able to prove that we are actually living in those prophesied times. My free article, Are We Living in the Biblical Latter Days?, offers much evidence that we are, indeed, provably living in those prophesied times.