“THE HEAVENS OVER YOUR HEAD SHALL BE BRASS…” 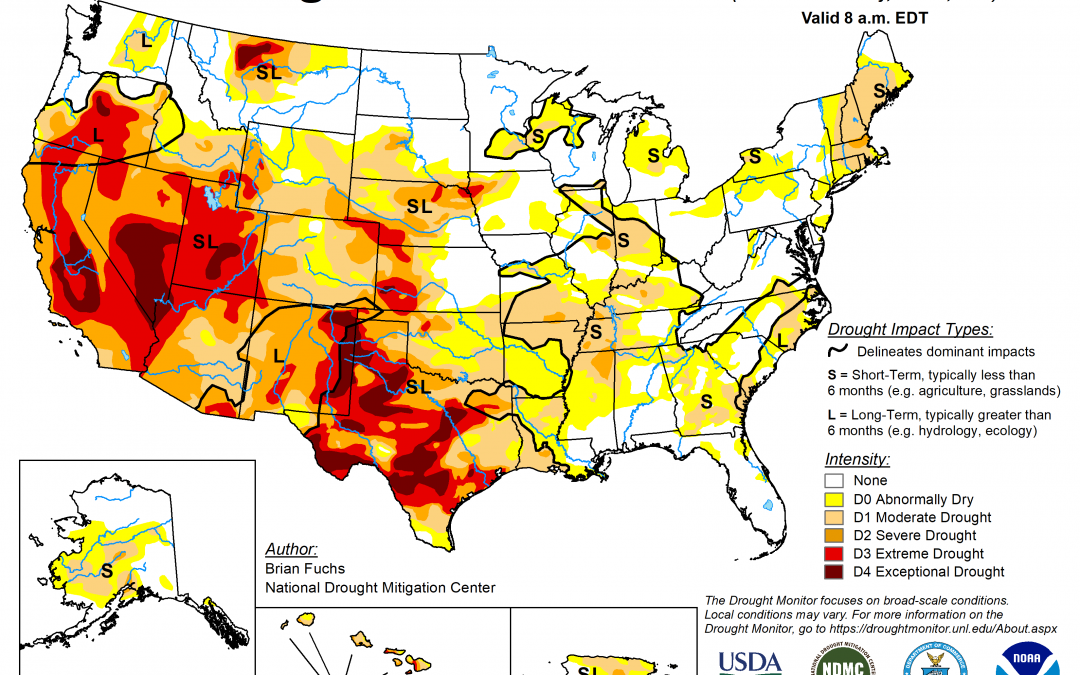 The “megadrought” which has been afflicting the Western United States is worsening and spreading. All readers need to be aware of how this situation is deteriorating into not just a national but a global crisis. Please read all of the first link as it is a good update of the varying aspects of this growing drought crisis. It warns that the water and electricity supplies for American Southwest states are at growing risk. Note the US drought map which shows how the megadrought is spreading and intensifying across across America’s agricultural states.

The link mentions that the Great Salt Lake is progressively drying up (a topic I addressed in a recent post), and mentions that Lake Mead and Lake Powell will be unable to provide either water or electricity to millions of people in the Southwestern states if the megadrought continues. There is a finite amount of water in those vital reservoirs and when their lake levels get low enough, the intakes for hydroelectric power will start “sucking air” and electricity production will stop. The link also notes the Colorado River is drying up so fast that the states in the Colorado River Compact are under a deadline to see how each state will reduce water to its residents and industries. This process will, no doubt, cause major political battles. It also discusses how Western Kansas wheat fields are looking like “barren wastelands” due to the lack of water. I can make a personal observation about South Dakota (where I live) and the northern plains. While we are not in the worst drought zones, the national drought map will show severe drought status extending into our region soon as little or no rain is forecast in the foreseeable or long-range forecasts even though temperatures will routinely be in the 90s.

Food production is also being jeopardized in Europe. The Dutch government is implementing self-inflicted food shortages on the Netherlands by implementing harsh “green-friendly” rules that forbid or reduce the use of nitrogen fertilizers (second link). Without fertilizers, crop production will drop so much that it may be useless for farmers to even bother planting a crop. Farmers are reacting with rage in widespread protests and convoys of tractors and farm machinery blocking or jamming roadways. Are you seeing anything about this on your news channels? If food supplies run short, the politicians in the Netherlands will pay a price in their next election. Videos of the protests are found in the third link and fourth link. Staying in a European context, the fifth link indicates that food inflation is now so bad in the United Kingdom that security tags are being put on cheese packages to keep them from being stolen.

The sixth link contains an analysis of the many crisis factors now converging simultaneously around the world. The author of the analysis calls it a “polycrisis situation” which is developing, and he predicts several of these major crisis factors will erupt together in the next 6-18 months. It is somewhat technical, but it is worth reading as it shows how the food supply crisis connects to and exacerbates other global problems. The analysis includes the ominous prediction that “a global food crisis seems alarmingly likely.” It offers some suggestions how people can limit the effects of the food crisis on their personal lives.

Now let’s focus again on the Netherlands. Even as the government is taking action to reduce naturally-produced food supplies grown by farmers in the Netherlands, a “Bill-Gates funded” factory facility that produced “artificial meats” was completely burned to the ground (seventh link). It was so large a facility that it burned for an entire day and people were warned about breathing its smoke vapors (could hazardous chemicals be in the artificial meats being produced there?). The link also observes that Bill Gates bought 2,100 acres of potato farmlands in North Dakota. I wonder why he is doing that? To build an “artificial meats” facility in the USA? To take its food production off-line? Who knows?

There is another crisis that will affect all kinds of supply chains–not just foodstuffs. It is a crisis that is being self-inflicted on the USA by the government of California. California, ever the source of bizarre laws and rules, has a new law that forbids a reported 70,000 independent truckers from picking up loads at California’s ports (eighth link). If 70,000 truckers are forbidden to pick up loads at California’s ports, it means the supply-chain problems are going to get a lot worse for all kinds of products. Foodstuffs will rot during long delivery delays, but it also means that electronic goods, clothing, etc. will all encounter new supply chain problems as the ports back up again. Since demand for most products is inelastic, a severe reduction in available supplies due to the California law will result in even higher inflation for a wide range of products. The major crisis situations we face are starting to overlap and become “greater than the sum of their parts” (a phrase used in the analysis in the sixth link).

Is the megadrought in the American Southwest which is now spreading to more states just a climatological accident…or is something much bigger at stake here? The world has forgotten the Creator God, but the Creator God has not forgotten the world. God’s Word in the Bible lists a number of good and bad events which nations will experience depending on whether they obey and honor the Creator or whether they disobey and defy him. These lists are found in Leviticus 26 and Deuteronomy 28. I recommend all readers read these chapters, and then ask yourself these two questions: (A) Is my nation obeying and honoring the Creator God’s Ten Commandments, statutes, etc.?, and…if the answer is “No” (B) Are the curses listed in those chapters to befall disobedient nations happening and spreading in your nations? God is an Eternal Being who can wait generations before getting angry enough to pour out curses on disobedient nations. However, when he decides to intervene it can be sudden and awesome! A prophecy in Isaiah 42:14 states that after a long time wherein God has been “still” and “refrained” himself from intervening among the nations, he can suddenly decide to intervene so powerfully that people will no more be able to ignore their Creator than a crowd can ignore a woman suddenly going into hard labor in their midst. We may be entering just such a time.

Are the USA and Western nations disobeying God’s laws? Of course they are. They are doing so in more ways all the time and the disobedience to God’s laws now spreads rapidly with governmental and societal approval and encouragement through all kinds of digital platforms. Disobedience to God is now openly being displayed ever-more defiantly in every sector of society. What God labels as “abominations” are now openly legalized and encouraged. This reality is inviting God’s angry response.

In Deuteronomy 28:23-24, God warns sinful nations that one of the punishments he will bring on such nations is: “The heaven that is over your head shall be brass, and the earth that is under you shall be iron. The Lord shall make the rain of your land powder and dust: from heaven shall it come down on you until you are destroyed.” People who live in agricultural regions understand these words. A drought can be so severe that the land under one’s feet feels as hard as iron and the skies take on an eerie, hard dry look. “Powder and dust” refers to dust storms which were widespread across America in the Dust Bowl days. Such storms can blot out the sun. Looking at American society, it is increasingly in open revolt against God, so, if there is a real God who inspired the Bible, we should not be surprised that these curses pronounced in Deuteronomy 28 are now befalling America–which is a Covenant nation as my books (available at this website’s homepage) and my article, The United States of America in Biblical Prophecy, document.

As America’s sins mount and the megadrought worsens, it will become more apparent that we are seeing God’s Divine Hand in action in our weather. Why should we be surprised that God is doing exactly what he said he would do in Leviticus 26 and Deuteronomy 28? As water is running out all across the American Southwest, private pools are still being filled up and tens of millions of gallons are being used to keep golf courses beautifully green. Leaders and citizens alike are not taking this severe crisis seriously….yet. When people turn on their faucets and they see nothing but a trickle come out and when people turn on their light switches and nothing happens, then they will start paying attention to the crisis. The masses will be furious at their political leaders for allowing things to get so bad. If God is “turning our heavens to brass” due to our national sins, then only repentance by both leaders and the masses will reverse the worsening crises. God may be watching national reactions already, asking himself: “I wonder how long it will take them to repent to me?” God is an Eternal Being who needs neither water nor electricity. Mankind needs lots of both…and both are now increasingly at risk in many areas. This crisis could get really bad before it gets better. If Southwestern cities start running out of water, what do you think the real estate values will plummet to for houses that have no reliable water or electricity supplies?

Personally, I think it is high time that governors and mayors start asking their citizens to pray for rain. However, if God is plaguing nations and regions due to their sins, prayers will do no good unless repentance is included in those prayers. God will know that repentance is real when his laws are included in national, state and local laws.

My thanks to readers who brought some of these links to my attention.