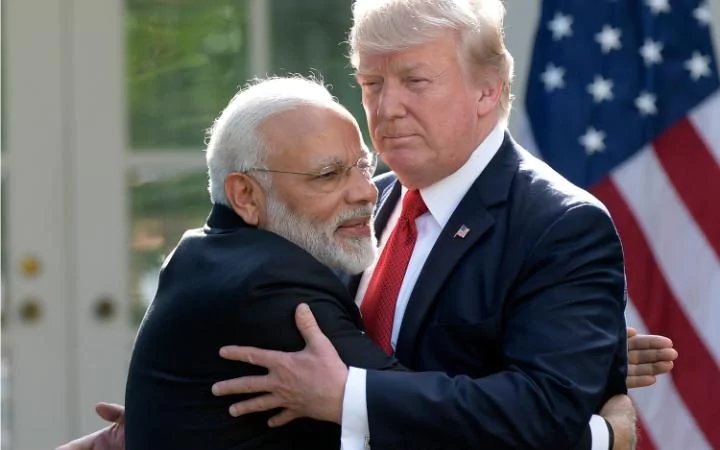 The Prime Minister of India, Narendra Modi, recently concluded what, by all accounts, was a very successful and productive meeting with US President Donald Trump in Washington, DC. The first link reports that Trump and Modi cemented a “strategic partnership” between India and the USA. I think “strategic partnership” is a diplomatic synonym for the word “alliance.” Modi and Trump apparently developed a very warm and trusting personal relationship, based on the genuine bear hugs that the two shared during the visit.

Allow me to first include a paragraph on the backdrop of major American foreign policy changes that have occurred since Trump took office in the White House. In spite of the endless domestic Far Left media attacks on Trump, Trump has been conducting a masterful foreign policy for the USA. He has moved swiftly to repair the damage that Obama did to America’s traditional alliances and its reputation around the world. Trump had a tour de force meeting with Saudi Arabian leaders and an assemblage of over 50 heads-of-state from the Sunni Islamic world. Given that the Sunni nations and the USA are both increasingly threatened by Shiite Iran, a close alliance between the USA and Sunni nations makes so much sense that it is a “no brainer.” In spite of that obvious fact, Obama always tilted toward Iran. Trump is setting things straight in creating a logical and strong alliance with the Sunni nations. Trump has also moved to forge a close alliance with Egypt and its leader, President al-Sisi, which makes abundant sense for both nations. Trump has rebuilt the traditionally strong American-Israeli ties as well as greatly strengthening the vital Japanese-American alliance. Trump is also moving to restore NATO into a strong military alliance again by insisting that NATO nations meet their commitments to spend 2% of their respective national GNPs on military purposes. Obama had so offended the Philippines that it was tilting toward China, but Trump has acted to reverse the damage caused by Obama to that relationship. Obama did act to move India and the USA into a closer relationship, but Trump is turning it into an open alliance. It should also not be overlooked that Trump has given America far greater respect and “soft power” in the world by his willingness to use “hard power” in pursuit of American interests and ideals. His use of the MOAB bomb in Afghanistan and launching 59 cruise missiles into a Syrian military airport used to drop chemical weapons on people has quickly reversed a longstanding perception under Obama that the USA had become a “paper tiger” on the world scene. Also, his willingness to shoot down a Syrian warplane, attack a column of Syrian tanks and two drones–all of which were attacking/threatening US-allied forces in Syria has “done wonders” in re-establishing a belief that America is a trustworthy ally in world geopolitics and that it will use military force to support its allies. As a result, nations want to be US allies again. The leftist media in the USA will not tell you this, but it is a reality all should know about. Now back to India.

It is clear from watching Trump interact with foreign leaders that he values establishing a strong personal relationship with foreign counterparts as much as relying on  shared national interests. The hugs shared by Trump and Modi spoke volumes about how well they got along in their private talks. Israel’s Prime Minister Netanyahu appeared almost giddy with joy and expectancy about the future of American-Israeli relationships when they held a joint press conference after their private talks. The talks between Modi and Trump will bear immediate good fruit. Soon, the nations of India, the USA and Japan will hold what is expected to be their largest-ever naval exercise in the Indian Ocean (second link and third link). This major exercise is clearly planned to send a cautionary message to Beijing. The USA, India and Japan all very much need each other as allies against growing Chinese militarism and expansionism. President Trump’s strong personal ties to India’s Modi and Japan’s Abe have made these national ties very firm.

I do not believe it is a coincidence that India’s Prime Minister Modi flew to a meeting with Israeli leaders after he met with President Trump. The fourth link reports that the Indian-Israeli alliance is becoming more open and visible now. The link notes that Israeli-Indian military ties have been growing ever-closer over the years (as I have documented in my past posts), but that this alliance is now unabashedly obvious. As a sign of India’s new international stance, Modi’s visit to Israel will not include any visit to any Palestinian leaders. That speaks volumes.

There are other nations that are also coalescing into a tighter alliance to oppose Chinese militarism. The fifth link reports that India and Australia are also conducting joint naval exercises to prepare to act as allies in the Indian Ocean region if a war erupts, and the sixth link adds that recent Chinese-Vietnamese talks apparently went rather badly. The link mentions Vietnam’s growing closeness to the USA, and the apparently failed Chinese-Vietnamese talks can only act to hasten Vietnam’s embrace of the anti-Chinese alliance based on the tripartite alliance of India, the USA and Japan. It is clear that Israel and Australia are part of this alliance and Vietnam is being inevitably pushed into it as well. Such nations as South Korea, Singapore,Taiwan and other Pacific Rim nations are also being drawn together as allies given the fact that they are all threatened by China’s hubristic militarism.

All of the above developments are entirely consistent with the prophecy found in Ezekiel 38-39 which foretells that an age-ending global war will occur between two very large global alliances at the conclusion of a period of time called the “latter days,” which will culminate with God’s intervention in world events. God’s “presence” comes to the earth in Ezekiel 38:21 as the war is raging–we Christians see this as the return of Jesus Christ as Matthew 24:21-31 and Revelation 19:11-20:5 foretell. These two chapters in Ezekiel prophesied with precise accuracy the composition of these two modern rival alliances, even though they were written over 2500 years ago by the prophet Ezekiel. Only a Divine Being could have inspired these chapters so long ago and brought them to pass in our modern age–the “latter days” of mankind’s failed experiment in self-rule without God and God’s laws. Isaiah 41:22-26 and 46:9-11 contain God’s direct challenge to mankind to look at his ability to fulfill ancient biblical prophecies as proof that he exists and that he is utterly sovereign over the unfolding of events on this earth. The fact that biblical prophecies have been fulfilled with precise accuracy in our modern geopolitics indicates that the Bible’s prophecies for the time between now and the return of Jesus Christ will also come to pass as well.

Would you like to know how future events will unfold and what will happen to your nation and region in the years ahead of us? Biblical prophecies give specific information about not only what nations will be in which alliance, but the motives for the start of the war, how the war will begin and from what direction, the locations of major campaigns and battle sites, etc. Many of the answers to those questions can be found in my articles: What Ezekiel 38-39 Reveal about a Future World War III, Japan’s Role in Biblical Prophecy, The United States in Biblical Prophecy, Are We Living in the Biblical Latter Days?, Is Babylon the Great about to Fall…Ushering in a New Beast System? and The Babylonian Origin of the Modern Banking System. If you read these articles, you will understand in advance a great deal about what is coming in the future and you will be able to understand pending world events as they transpire. Because multitudes on the earth either have never read the Bible or have been duped into thinking it was proven false by the evolutionists (a great mistake!), they will be blind to the divine plan that will unfold in future years. There is no need for you to be blind as well. If you read the above free articles, you will be informed in advance and you will watch it unfold. God has promised to keep his biblical prophecies, and he has done a flawless job in fulfilling them so far. Expect him to continue to do so.