The Great American Eclipse… as I Experienced It 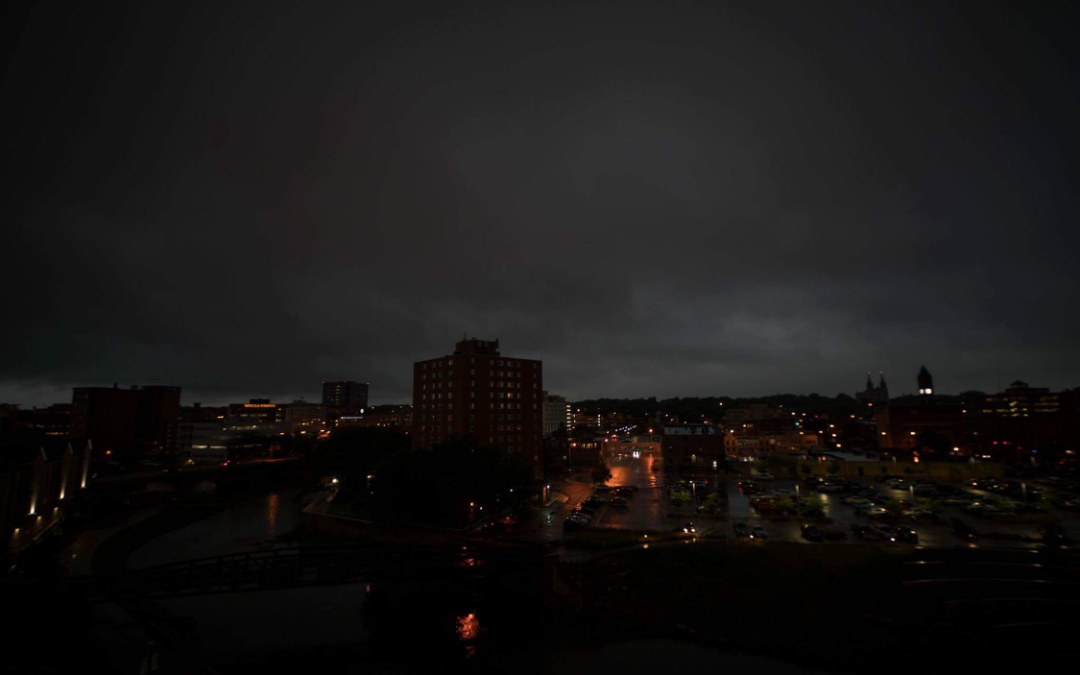 Today was the date of what has been called the Great American Eclipse of 2017. I thought it would be apropos for me to write a short follow-up to the post I wrote about the eclipse yesterday. Only those people fortunate enough to be in the direct path of the eclipse’s totality as it passed over the USA could see the full impact of the eclipse. I watched it “live” on TV pass across the USA, and it must have been very impressive for those who witnessed it personally. Unfortunately, my home city, Sioux Falls, SD, was not in that path, but we were close enough to be in a 93-94% of totality of the eclipse, according to one NASA chart I obtained at my local public library. I was ready with my “pinhole” projector to safely watch the shadow of the moon pass across the sun’s face, but, alas, it would prove to be useless.

Our region was, apparently, one of the few regions of the USA at or near the totality of the eclipse that had rainy/cloudy weather at the time of the eclipse. Nevertheless, we did experience some of its effects. After an early shower, we had a brief lull in the rain and a lessening in the denseness of the cloud-cover as the eclipse reached our city. Those conditions didn’t last long. The rain returned and we had a cloudburst soon after the eclipse passed us by. During the brief window when we had a darkening of our region due to the combined effects of cloud-cover and the eclipse, it got unusually dark here for midday. As I had heard on our local TV media that our maximum of totality experience would be about 1 pm, I walked outside in my yard just prior to that time and observed the very noticeable darkening that occurred. The city’s street lamps and the solar-powered decorative yard lights in my neighborhood all lit up as the peak eclipse darkness approached and passed. I could see night motion-detector lights turning exterior house lights on. Some people had to turn their interior lights on as it was so dark.

The experts on TV had urged people to look for changes in bird and wildlife behavior as the day became night (or near-night) due to the eclipse. I did observe one sign of confusion in the animal world around me. I’ve been a bird watcher for decades and I was surprised to see two Common Nighthawks whirling in the sky over my house. These birds typically feed on insects in the sky as daytime is turning to nighttime in the sunset/twilight portion of the day. Their presence in the sky near midday was unusual for 1 pm. It must have been a very moving experience to see the eclipse in its path of totality in a clear sky. No doubt, some readers of this post were blessed enough to witness the eclipse’s totality.

As I watched images of the eclipse’s totality on TV stations, I recalled the words of Genesis 1:14 that God set the great lights of the day and night in the heavens for “signs and seasons.” It occurred to me that unless a super powerful Creator Being had, indeed, positioned the moon in exactly the right position between the earth and the moon, there would be no possibility of an eclipse. Also, unless a Creator Being had made the moon exactly the right size to equalize the size of the sun’s disc as it passed in front of the sun, there could be no eclipses. Also, unless a Creator Being had positioned the moon in exactly the correct orbital path so it could pass at a point exactly between the earth and sun, there could be no eclipses. That’s a lot of things which had to happen exactly correct for any eclipses to ever be seen on earth. This tells me that a Creator Being is the one who designed the sizes, positions and orbital paths of the sun, earth and moon so such eclipses could occur at all. My previous post noted that while most such eclipses do not presage major events on earth, some do. We will have to watch what happens over the next few weeks or months to see if this eclipse proves to have occurred just prior to a major biblical prophetic fulfillment. One person did send me a report that this solar eclipse occurred 40 days prior to Yom Kippur on this year’s biblical/Jewish calendar (a quick check with my calendar indicates that is correct). The number “40” has often proved to be associated with times of religious significance in the Bible (Moses’ 40 days and nights on Mt. Sinai–Exodus 34:28, the 40 years of the Israelites wandering in the desert–Numbers 14:33-35, the 40 days and forty nights of rain falling in the time of the Deluge–Genesis 7:4-12, Christ fasting for 40 days prior to his testing by Satan–Matthew 4:2 etc.). Jonah also warned ancient Nineveh that it would be destroyed in 40 days from the time of his prophecy (Jonah 3:4), but that specific prophecy failed to occur because the Ninevites repented so God cancelled his curse on the city (much to Jonah’s chagrin). I know of no one who claims any specific word from the Lord about any 40-day period of time before any specific event is to occur after the day of this Great American Eclipse. However, if this eclipse has special religious significance it will be revealed in its due time. Again, as I said in my previous post on this topic, most eclipses simply “just happen.” We’ll have to wait and see if this one is different.

At any rate, the eclipse was a spectacular event. As I mentioned above, the odds of the earth, sun and moon all being in precisely the right sizes, positions and orbits to permit eclipses to occur is proof to me that a Creator Being designed it this way to make eclipses happen. The odds of this happening all by chance are astronomically small (pun intended). For those who wish to see how dark it was at 1:03 PM near midday today in Sioux Falls (at about 93-94% of totality at a cloudy time), please check out the photo below, which a local person took and sent out to others. I was impressed with the photo when it was brought to my attention, and I am passing it on for your information as well.