THE EU CRASHES THE “G-7” MEETING IN CANADA 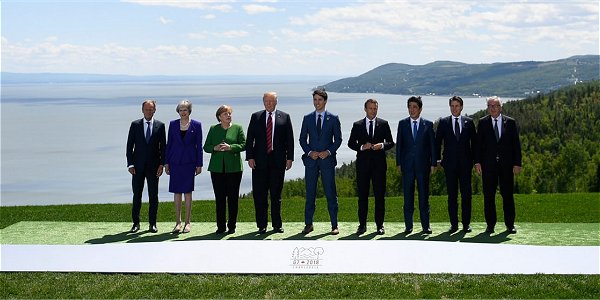 No doubt, readers have seen or read media reports about the “G-7” meetings held in Canada. Most of the stories focused on President Trump’s standing alone against the other G-6 leaders as he takes steps to remedy America’s massive trade deficits with the rest of the G-7 nations (and the world). Trump also suggested Russia be allowed back into the group discussions so the assemblage can be the G-8 again. The other attendees are not receptive to that suggestion This post will focus on an entirely different aspect of the G-7 meetings that I doubt the mainstream media will mention at all.

Notice the first link and second link. They feature photos of the national leaders attending the G-7 meetings. But wait…you can count and see that there are nine people in the group photos of the seven national leaders. Who are the other two people who are not leaders of any of the G-7 nations? The two persons present in the photos and meetings who do not represent any individual nation are Donald Tusk and Jeanne-Claude Juncker, the President of the European Council and the President of the European Commission, respectively (third link and fourth link). They are the top bureaucrats of the EU, and neither one is a head-of-state nor were they elected to their posts by the citizens of any of the EU’s member states. The other national leaders are all elected leaders of their nations. Why then weren’t the meetings called the “G-7 + EU” meetings or the “G-7 plus Two EU Bureaucrats” meetings? Why was the EU allowed to send two top officials to the G-7 meetings while the actual G-7 nations only had one representative each?

My own thought is that the inclusion of the EU’s top bureaucrats was two fold. One was to gain some kind of visual legitimacy for the EU’s unelected leaders on the world stage (one of the two EU positions is elective in the EU’s parliament but the EU’s citizen voters are not allowed to elect them or reject them). These two EU officials are accountable to the European elites who select them, not to any European citizen/voters. The other reason was, I think, to tilt the stage heavily toward European agendas and perspectives instead of American ones. Consider this fact: Japan, Canada and the USA were all represented by just one person–their elected chief-of-state. However, the four European nations (Germany, France, the United Kingdom and Italy) represented at the G-7 meetings were technically represented by three leaders each–the two EU leaders plus the elected chiefs-of-state. Thus, twelve of the fifteen ex-officio “voices” at the G-7 meetings were European voices. Two important “asterisks” to this commentary need to be noted, however. While the UK is still (barely) in the EU after its Brexit vote, the two EU leaders will not be indirectly representing the UK in its UK role much longer. The other “asterisk” is that the Italian chief-of-state was just elected after a very anti-EU, anti-establishment election in Italy. Indeed, the EU tried to manipulate the Italian president’s powers to impose an IMF official on Italy as a caretaker Prime Minister for an indefinite period of time. This created such a rebellion among Italy’s voters that it was seen as inevitable that the EU-imposed caretaker would be quickly removed in a vote of no-confidence in the Italian parliament and new elections would be held. The EU beat a hasty retreat from their effort to impose a hostile take-over of the nation of Italy (see my recent post) because the impending vote was being heralded as a referendum on whether Italy would stay in the EU and Eurozone or leave both groups. Fearing a rout in the next election, the EU quickly backed off and the elected leaders took office in Italy in a coalition government. If Italy had held another election in a moment of national fury vs. the EU, Italy likely would have left both the EU and the Eurozone. This could have precipitated a situation where other EU nations would have joined Italy’s exit from the EU and the Eurozone. Fearing that outcome, the EU accepted a tactical political defeat in Italy to avert a strategic disaster in which both the EU and Eurozone would have required emergency restructuring. You can be sure that Tusk and Juncker were carefully watching the new nationalist Italian leader at the G-7 meetings.

It is my view that Tusk and Juncker were surely making sure that the EU’s globalist agendas did not suffer further reverses in the Canadian-hosted G-7 meetings. President Trump is, as all realize, given to impulsive statements, and his nationalistic viewpoints are being echoed at present in Italy, Poland, Austria, Hungary and other European nations who are increasingly acting in their own national interests and essentially ignoring the EU’s diktats. There is another aspect of the EU’s internal politics which is worthy of comment. EU Council President Donald Tusk used to be the Polish Prime Minister for many years, and when he led that nation, Poland was firmly in the hands of the globalists. After Tusk left office in Poland to go to his new EU leadership position, the Polish voters had the audacity to reject everything Tusk had stood for and elected an anti-EU, nationalistic government. The new Polish government is closely-aligned with President Trump’s positions, and even has offered to spend $2 billion in Polish money to build the US a permanent military base inside Poland (fifth link). Russia opposes this action and the fifth link posits that there may be treaty issues involved, but I hardly see a problem with such a base since Russia has already placed nuclear-capable missiles in its Kaliningrad enclave adjoining Poland on the Baltic sea. Since Russia is posing existential threats right on Poland’s border why can’t Poland host a US military base in order to defend itself? Now, back to EU matters. Tusk is, no doubt, highly incensed at his native Poland’s on-going rejection of the EU’s globalist agendas which he, Tusk, is trying to implement throughout Europe. I think that you can see that this matter is a very personal one between the current nationalist Polish Prime Minister and Tusk, the EU leader who previously was  Poland’s globalist Prime Minister.

From a biblical perspective, these issues must be seen in the overall context that the current globalist system, called “Babylon the Great” in the book of Revelation is doomed to collapse in the latter days of our age. The current global powers will not go down without a fight. Revelation 13:1-5 and 17:1-18 foretell that a cryptic alliance of “seven heads and ten horns” will overthrow Babylon the Great’s system and Revelation 17:16 strongly infers the overthrow will involve a major struggle.

I hope readers find the above commentary useful. Oh, yes! One more point. While researching this post, I went to the EU’s official website to do some fact-checking and found that I was given a message saying “Access denied–You are not authorized to access this page” (a notice I’ve never encountered before). What I saw on my screen is included in the sixth link. Interesting. Maybe it was just a temporary glitch (such things do happen), but perhaps the EU’s bureaucrats really don’t like what I am writing and blacklisted my blog from directly accessing their website’s homepage. The EU certainly does have bureaucrats reading what I post. As donors to my website know, the EU’s domain name is regularly among the top ten “nations” which access my website, according to internet statistical services. I suggest that you, as a reader, try to access their website directly and see if you also receive such a denial of access message. [As an aside, readers who donate $30 in any month to help fund my website receive the Bonus Links for that month. These Bonus Links provide additional information and commentary not seen or posted at my public website. My website is not supported by any church or organization and is entirely reader-supported. You can be thankful to the reader/donors that you are able to read this post and access the rest of the information at my website.]