The Day the Angels Saved the British Army 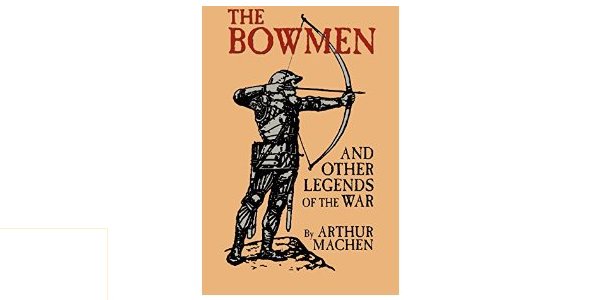 [Introduction: The post below originally appeared on my blog on April 2, 2009, and I am reproducing it below as I doubt that many readers who found my blog in recent years have seen this inspiring story. It is based on an article entitled: Hard-pressed English soldiers swore they had seen ghostly archers–or even St. George himself…” by Robert Barr Smith. It appeared in the print version of the August, 2005 issue of Military Heritage magazine, a magazine which is known for meticulous accuracy and research regarding its articles about events in the world’s military history.

The Bible has many accounts of God deciding the results of battles in which his Israelite kingdoms/tribes were fighting during biblical times. That God would again intervene in behalf of the modern Israelite nations in vital battles is entirely consistent with biblical narratives. What is remarkable about this account is that many soldiers on both sides of the battle saw angels intervening in the combat. Various magazines and newspapers wrote articles about this heavenly intervention soon after it occurred, many soldiers who were there gave interviews about their witness to this miraculous event and even a book (On the Side of the Angels by Harold Begbie) also discussed this eerie episode. I wanted to include a link to the Military Heritage article when I first wrote this article, but no electronic version could be found. Perhaps tech-savvy readers can locate the link today, twelve years after the original article was written. Some city libraries may have the original article in their magazine archives. You may form your own opinion about these accounts, but I have no reason to doubt the veracity of these accounts from many soldiers who witnessed these events. Below from my blog archives is my original post about this subject.]

The day was August 26, 1914 during an English-German battle in World War I, and it was only the intervention of heavenly angels which saved the British Expeditionary Force from being overrun by the German army. There were many witnesses to this event on both the English and German sides of the battle.

This is not some account from a fringe religious source or some tabloid newspaper. This account is taken from an authoritative military history publication, Military Heritage, a subscription magazine with extraordinarily-detailed accounts of ancient battles with historical accounts of the commanders, the weaponry, the tactics utilized, etc. It is a magazine with definitive accounts of the military history of empires and nations in both ancient and modern times. Some newsstands in large cities will have copies for sale, and some libraries will likely have the back issues archived. The particular account on which my post is based is from the August, 2005 issue of Military Heritage, and the article was written by Robert Barr Smith in the Soldier’s feature of the magazine (pages 14-17, 76). I acknowledge I have been a subscriber to the magazine for years, and I recommend it to those interested in the subject of military history.

With that introduction, let’s examine the details of the battle that day during World War I. It took place when the German Army was on the offensive and advancing against the allied French and English armies. It was early in World War I, and there was then only a small British Expeditionary Force (BEF) fighting alongside the French army. During a battle fought near Mons, Belgium, the French army retreated and the small British force took the brunt of the advancing Germans. The article states that “The odds were 4-to-1 against the BEF in infantry, plus the usual German superiority in guns.” Although the British fought bravely as they attempted an orderly retreat in the face of superior numbers, they finally reached the point where “the Germans were coming on in such overwhelming numbers that rifles and courage could not hold them any longer.” Then, according to many witnesses who were actually participants in the battle, a miracle occurred. The angels came.

The article contains numerous, first-hand accounts of British soldiers who witnessed the events that day. Some angels were described as a “shadowy army…of bowmen,” and other British soldiers witnessed “unearthly figures materialize…above the German lines. They were winged like angels.” There were accounts that the angelic army was led by a “tall, yellow-haired man on a white horse, wearing golden armor and wielding a sword.” There were reports of hails of arrows being unleashed by the angelic bowmen which “cut down the enemy en masse.”   According to the article, “the German General Staff [found] the bodies of hundreds of their men lying on the battlefield with no discernible wounds…”  It was not only common footsoldiers who saw the angels, but NCOs and officers did as well. A British colonel is quoted as saying “…the thing happened. You need not be incredulous. I saw it myself.” The article also mentions a confirming account by a Captain Hayward, an intelligence officer with British I Corps who saw “four or five wonderful beings” and “figures of luminous beings.” The article also cites confirming evidence by German prisoners in the battle who also saw the angels.

This event was widely-reported (and believed) in the British nations as many soldiers confirmed the angelic intervention. Articles and books were written about the angelic intervention. There is no question the soldiers and officers who were there believed that it occurred. As time passed (and as atheistic evolution permeated world cultures), the account has been written of as hysteria or some kind of mass delusion. However, all the detractors have one thing in common: They weren’t there and they didn’t see the events. The detractors did not want to believe it happened, so they “wrote it off.” What did the Military Heritage article conclude?  It closes with these words; “the men who told these stories…were tough, experienced soldiers…And a great many of them saw identical sights at different times and in different places…Maybe it was, after all, merely mass hysteria. But maybe it wasn’t.”

I could not find the article from Military Heritage on the internet, although I found one reference to it (see “references” in first link). I’ve also included other links about this angelic intervention. The Wikipedia account (second link), parroting the evolution-based political-correctness of our time, discounts the event. Another (third link), from a British publication, affirms the event and reports a second angelic intervention occurred on the side of the Allies in World War I (a mysterious charge of “the white cavalry” which German bullets could not kill).

Personally, I think the event happened just as the eye-witnesses saw it occur. Readers of my books know that the British are the modern tribe of Ephraim who became the “company of nations” prophesied to exist in the latter days of our age (Genesis 48:14-20), and the USA was founded as the single great nation of Manasseh (the brother tribe to Ephraim). When the British and American nations still had faith in God in their cultures (and governments), God blessed them with national greatness, prosperity and victory in warfare. This was a fulfillment of the “birthright” promise given by God to Abraham’s descendants, and later, to the tribes of Ephraim and Manasseh (the sons of Joseph). In the angelic intervention, God was simply keeping his promise to bless the tribes of Ephraim and Manasseh over the millennia. In World War II, the weather cleared just long enough for the Allies to mount the D-Day invasion, much to the surprise of the Nazi forces. In the movie, Patton, prayer is depicted as causing a clearing of the skies so allied air forces could rescue a cut-off American force in Bastogne. The Creator God is real, whether modern mankind wishes to acknowledge it or not. Indeed, modern faithlessness was even prophesied. Revelation 12:9 prophesies that mankind in the latter days would be very “deceived,” and Luke 18:8 prophesies that  mankind would have scarcely have any faith left in the latter days. Today, the British and American nations and the rest of the western world have largely abandoned their Christian faith and turned to open sinfulness in their societies. What has been the result? First the British Empire fell apart and now the American “Empire” is starting to implode on the world scene. Nations as divinely-blessed as the UK and USA cannot turn their backs on the Creator who gave them their national blessings without eventual severe consequences. As the financial systems of the British and American nations weaken and buckle in the current global crisis, these divine blessings are in the process of being withdrawn. National repentance is the only real solution to this problem.

Now for a final question. Will those divine angels come back again in the future? The answer is a resounding “yes.” They have repeatedly visited and protected the people and nations of the tribes of Israel at various times in their history. In the time of Joshua, the commander of the heavenly army personally appeared to Joshua and spoke with him (Joshua 5:13-15). In the time of King Hezekiah of Judah, a single angel was sent by God to slay 185,000 Assyrian soldiers who were besieging Jerusalem (Isaiah 37:35-36). Those Assyrian soldiers were also mysteriously found dead in their camps, even as the German soldiers soldiers in the above-cited World War I battle were found “without discernible wounds.” At the end of this age, Jesus Christ (Yashua) will personally lead a vast angelic army which will descend to the earth when the heavens open and he will lead “the armies of heaven” into battle (Revelation 19:11-21). This same angelic host is describes as intervening in human affairs at the end of this age in Joel 2. Joel 2:8 prophesies that they will be invulnerable to any human weapons, even as the angels who intervened in World War I were also invulnerable to human weaponry.

The world as a whole will not believe in the literal intervention of Jesus Christ and an angelic army of heaven…until it occurs. By the time it does occur, many prophesied events will have taken place. The beast power will have risen and the ministry of the Two Witnesses will have ended with their martyrdom. The world will be in a climactic world war when Christ returns with his angelic army. Revelation 19:19-21 prophesy the beast power “and the kings of the earth and their armies” will turn their guns and weaponry against the visible, angelic army that will attend Jesus Christ and the resurrected saints. I truly marvel at this prophecy. How can mere physical armies hope to win against the armies of their Creator? Either they will be so deceived that they think Christ’s heavenly armies are “outer space invaders,” or they will be so duped by Satan (Rev. 12:9) that they do not realize that they are following Satan to their deaths. Revelation 19:19-21 also gives us the final outcome.