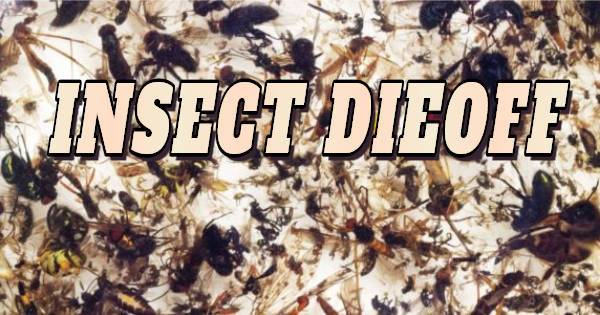 Several factors are coming together that could cause a “perfect storm” jeopardizing a large portion of humanity’s food supply. These factors are man-made, but the motivation for short-term profits could delay the very actions which are urgently needed to head off this crisis. As I will explain in this post, I am a personal witness to some of these deleterious factors.

Readers of this blog are well-aware of one of these factors: the severe and spreading global die-off of bee colonies. Bees, particularly honey bees, are critically-important pollinators for many vegetable, fruit and nut crops. Obviously, as more bees die off, fewer crops will be produced. This is a growing crisis as mankind’s global population continues to increase, and a steady reduction in many food crops will lead to food shortages for many nations. Shortages of the bees’ food supplies, chemical pesticides, planting of GMO crops whose pollen lacks what natural crops have to feed the bees, etc. are all possible contributors to this bee-die-off. A post I wrote last year on the bee-die off is found in the first link for new readers to review. However, this piece is not about the bee die-off.

Many crops that are losing bee pollinators rely on other insects as back-up pollinators to produce vegetable, fruit and nut crops. However, it is now apparent that these insects are also dying off at a prodigious rate. The second link and third link report that the insect die-off has now accelerated to a point where there could be a “catastrophic collapse of nature’s ecosystem.” One link reports 1/3rd of all insect species are now endangered, and that this die-off of insects will accelerate further unless we “change how we produce our food.” Obviously, if insect populations are dying off, the species that eat insects will start dying off as well due to a reduced food supply. The fourth link has an excellent article on the connection between insect and bird die-offs. I have the printed article from the Minneapolis Star-Tribune, which is commonly available in my home town in the American Midwest. [If the article will not open for you, it may be available in the archives of the startribune.com website. The article is entitled “Pesticides hurt birds as well as the insects they eat.”] I will cite some of its salient points. It relates that organophosphate chemicals were phased out in agricultural use due to their adverse effects on natural wildlife. However, the neonicotinoid (neonic) chemicals that replaced the organophosphate have proven to be even deadlier for organic species. The article states the neonic agricultural chemicals are killing honeybees, wild bees, birds, fish and lizards. These “pesticides run off into wetlands, lakes and streams.” Therefore, they also can kill aquatic life, and enter the entire ecological food chain. The article also asserts that barn swallows and gray catbirds are declining significantly due to the toxic insects they feed to their offspring. The fifth link offers information on the dangers posed by neonic pesticides to bees and other insects as well as the birds that eat them.

Indeed, birds are also undergoing a massive die-off. The sixth link and seventh link offer details of a comprehensive study which found that North America has lost 3 billion birds from its previous avian population in the last 50 years. The survey cites warblers, red-winged blackbirds, sparrows, finches and other bird species as being particularly depleted in numbers. The survey indicated the region I live in has lost 53% of the normal number of its grassland birds. One link mentions there is a 30% reduction in breeding pairs of birds which is a harbinger that future bird hatches are going to be steadily reduced. The eighth link adds that the insect-and bird die-off is not limited to North America, but includes European nations as well. One survey confirms large insect die-offs in the Netherlands and insect and farmland bird die-offs all across Europe. The culprit identified in these die-offs? You guessed it! The neonicotinoid pesticides.

The ninth link is an article about the massive bird die-offs in my region of the USA–the Upper Midwest. It is an article entitled “Mourning the many birds gone missing” from the skies of Minnesota. It reports the Red-Headed Woodpecker–a beautiful and large bird–has died off in 95% of its normal range and that many warblers, finches, blue jays, sparrows, meadowlarks, red-winged blackbirds, etc. are also dying off in large numbers. [Readers may have to visit the archive of the Minneapolis Star-Tribune for this article also.] Allow me to add my own observations on the growing bird die-off as I have been a birdwatcher for over 30 years and I’m also mourning the loss of so many bird species. The red-headed woodpecker was a very common sight in South Dakota for decades, but its population has crashed. I was delighted to see two of these birds in a rural area on a drive this Spring. Insect-eaters have especially all but vanished. Meadowlarks were a ubiquitous species in rural areas on utility poles and kingbirds were just as ubiquitous on fence lines. They vanished quickly in recent years. I was thrilled to see my first meadowlark in three years earlier this summer (usually they were trilling their familiar song in the hundreds and thousands of birds everywhere). The previous link I referenced also cited birdwatchers in Minnesota wondering “Where are our meadowlarks?” In my suburban neighborhood, there used to be numerous purple martins, swallows, chimney swifts and up to a hundred common nighthawks visible some evenings (all are insect eaters). They have vanished. I saw my first barn swallow in my neighborhood in three years a few months ago, and the warblers are very rare sights now during the Spring and Fall migrations. Some species that I see doing well in my backyard are chickadees, house finches, cardinals and other birds that are primarily seed eaters. The mass die-offs of insect-eating bird species are a clear testimony that all insect species are in sharp decline. This is not surprising as I live in farming country where chemicals of all kinds are sprayed on farm fields and are also sprayed on suburban yards and public landscapes. Even robins were clearly less numerous this year. An observation I’d add is that I used to see numerous night-crawlers (long earthworms) come out onto sidewalks and driveways in huge numbers after each rainstorm. They have all but disappeared as well.

With bees, all insect species, birds, earthworms, aquatic species, etc. dying off in large numbers, we must come to a very serious conclusion: We are killing our soil. Unless we change the way we farm to a new system that involves far fewer chemicals and bans the known harmful pesticides, the gradual death of our soil will continue. With the all-out chemical onslaught on the soil, how can the minute soil microbes that are necessary for soil health survive either?

There are other spreading threats to our human food supply. The tenth link warns that California farmers are facing possible water cut-offs that will idle vast swaths of farmland and reduce the production of so many of the foods we depend on in our daily diets. The eleventh link and twelfth link report that there are so many fertilizers and chemicals draining off farm-fields and urban yards into America’s rivers that there is now a huge and growing “dead zone” in the Gulf of Mexico south of where the Mississippi River empties into the Gulf. Aquatic life increasingly cannot exist in this chemical stew, and the dead zone now numbers approximately 7,000 square miles. Clearly, entire fisheries industries in the Gulf Of Mexico will cease to exist unless the amount of chemicals dumped onto our soil and into our rivers is drastically reduced…and quickly. However, given how the profits of corporations take precedence over the survival of all species and even the food supplies for mankind, I expect no swift action…no matter how urgently it is needed.

Looking at the information in these links, it is clear that we are gradually killing off the life forms that inhabit our skies, land, and waters. We need those life forms in order to have a healthy food chain and adequate food supplies for human beings. There are biblical prophecies that food shortages would characterize the latter days of this current age. Famines have occurred throughout human history in many parts of the world, but the prophecies of famines in Matthew 24:7 and Revelation 6:5-6 argue that a global systemic crisis in food shortages will occur. Revelation 6:5-6 indicates that a global food shortage will result in food supplies being rationed to hungry people and perhaps rationed by price as well.

Many people read the Bible’s latter-day prophecies and think an angry God is going to hit the earth with all the latter-day plagues and traumas that are described. God will certainly be responsible for some of them, but a global food crisis is now relentlessly coming upon mankind as a result of mankind’s own short-sighted actions–not the act of an angry God. The information in this post should convince all readers the threats to our global food supplies are real. Not only is this confirming biblical prophecies, but it should also motivate you to make reasonable preparations for you and your family to prepare for the inevitable food shortages that are coming if mankind’s short-sighted agricultural/chemical practices are not changed. I urge you to read these two free articles relevant to this post: Are We Living in the Biblical Latter Days? and Should Christians Prepare for Future Hard Times?