The “Chipping” of Human Beings Is Beginning 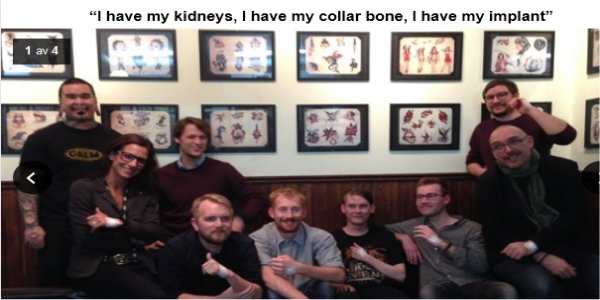 This post is to give readers a “heads up” that the implantation of electronic chips into human beings is now beginning.

The first link and second link describe a program in Sweden where people are being given electronic chip implants in their hands. The Google search I did was prompted by a story I saw on cable-TV (on BBC-TV as I recall) that chipped Swedish employees’ LinkedIn information was being inadvertently distributed to other parties via these implanted electronic chips. The third link is the Google search result I reviewed, and while some mention a “LinkedIn” aspect to this story, it is hard to find information in internet stories that mentions this straying of supposedly secure personal information to others via implanted chips. The fourth link is a story about a Wisconsin firm that is about to begin distributing electronic chips to other companies for implantation into their employees or perhaps other population groups. The Wisconsin firm is about to “chip” many of its own employees. If this program spreads, I can visualize inmates in prisons being “chipped” for security reasons whether they object to the chips or not. Military personnel could be readily chipped as well, and the chips could be implanted as a substitute for traditional dog tags. School children could even be chipped voluntarily or involuntarily as part of vaccination programs. I wonder if parents would even be allowed the right to refuse such implants for their children in public schools (this is another good reason to place one’s children in private Christian schools).

The electronic chipping of human beings is being introduced as a means of promoting “convenience,” and that may be true enough as this program begins in initial pilot programs at various locations. The report of private social media information being spread inadvertently via electronic ID chips also indicates to me that these chips are capable of “harvesting” a lot of data beyond simply providing a convenient way to open locked doors and regulate access to secure corporate locations.

I wanted readers to be aware that pilot programs of chipping humans are now beginning to occur in various locations. It may be occurring in locations other than Sweden and Wisconsin. It is my understanding most readers are aware of the prophecy in Revelation 13:16-17 that a future global “beast'”power will require some kind of “mark” in their hands or foreheads in order to participate in global commerce. I would expect that traditional passport data would also be incorporated into these “marks” so people’s international travel could be controlled in the future. It is not clear what the Apostle John saw in his vision of this cryptic “mark” that people were receiving in the latter days, but implanted electronic data chips could easily fulfill such a prophecy. If (notice I wrote “if”) this is what John saw in his vision, then this technology is now being “field tested” on human beings already. Revelation 13:16-17 will be fulfilled after Babylon the Great’s global system falls and is replaced by the new global beast system. However, technology that could fulfill the prophecy in Revelation 13:16-17 now exists and is being deployed. For now, such electronic implantation is being done voluntarily. When we reach the point in the future when Revelation 13:16-17 is fulfilled, it will not be voluntary.

For confirmation that we are assuredly living in the biblically-prophesied “latter days,” I urge any readers who have not done so to read my free article, Are We Living in the Biblical Latter Days?