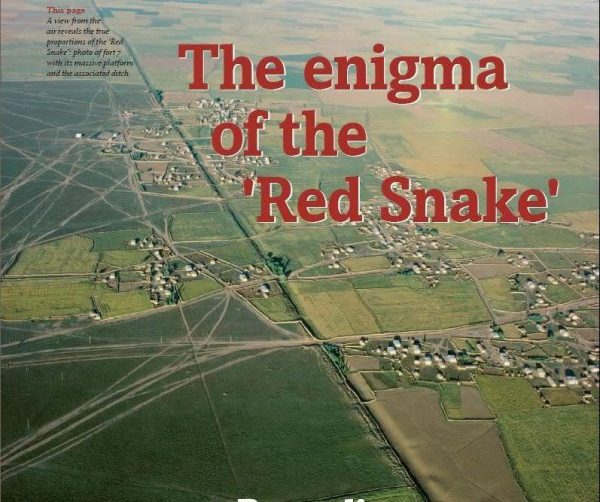 Recently, I watched an episode of the TV program “What on Earth?” on the Science cable-TV channel, and it had a very interesting segment that pertains to a portion of historical information I included in my books, Parthia–The Forgotten Ancient Superpower, Israel’s Tribes Today, and The “Lost” Ten Tribes of Israel…Found! This TV program examines forgotten structures, previously-undiscovered cities and many mysteries on the surface of the earth as photographed by earth-mapping or surveillance satellites. I enjoy the program as it periodically covers ancient locations and structures that have a biblical context–even though the shows do not discuss any such contexts.

One program had a segment about the “Red Snake Wall” found along the border region of northern Iran east of the Caspian Sea. The segment noted that this was a very large defensive wall built in ancient times to protect a southern people from a threatening northern people. The segment revealed that scientific evidence indicates that the wall was built during the time of the Sassanian Empire to keep out the “White Huns” who lived north of the wall. There is vital information about the White Huns that needs to be passed on to readers of this blog. The information is supportive of the information found in my aforementioned books which include a discussion of the White Huns in their narratives.

The first link, second link and third link offer detailed descriptions about this “Red Snake Wall,” and photographs of its remnants still visible today. These links indicate the wall was built along at least 195-200 kilometers of the northern border of the ancient Sassanian Empire between the Caspian Sea on its west end and a mountain range at its eastern end. It was given its name because it was made of reddish-hued bricks and it snakes its way across the landscape between the two natural obstacles of the Caspian Sea and a mountain range. It is much longer than the famous Hadrian’s Wall in Great Britain, and is second only to the Great Wall of China as an ancient defensive border wall. Like Hadrian’s Wall, it included many forts stationed at intervals along the wall, and estimates are that the entire wall was garrisoned with between 20-30,000 soldiers.

How does this have a biblical context? The reason is that the Sassanian Persians were the power that overthrew the Parthian Empire circa 227 AD and sent Parthia’s vast millions of Caucasian/Semitic peoples toward Europe in a mass migration that took centuries to fully accomplish. The “White Huns” were given that name to differentiate them from the more Oriental-looking Hunnic tribes of ancient  times–such as Attila the Hun’s tribe. These “White Huns” were given their name due to their “white bodies” (fourth link), indicating they were a Semitic people. Their language indicated they originated in “Eastern Iran” (fourth link), confirming their origin was in the eastern region of the former Parthian Empire and that they did not have an origin with the language groups of northern or central Asia. It was once thought that this Red Snake Wall was built in Parthian times, but that makes no historical sense. During Parthian times, their northern border was inhabited by a confederation of Scythian tribes, who were Parthia’s ethnic kinsmen and allies. No defensive wall was needed then. However, after Parthia fell and its Semitic people migrated toward Europe via the Caucasus Mountains (giving them their subsequent name–the “Caucasians”), not all Parthian and Scythian people were able to migrate toward Europe in that great exodus of Semitic people out of the old Parthian region. Some, like the White Huns, were cut off in eastern locations, and they became enemies to the Sassanians, who had defeated and driven out the Parthian allies of the White Huns.

It is my firm view that the White Huns were one tribe of the so-called “lost ten tribes of Israel” who were removed in large numbers into south-central Asia by the Assyrian Empire. The Assyrians removed many Israelite captives to the “cities of the Medes” (II Kings 17:6-7), which was in the region of northern Iran near the Caspian Sea (very close to where the Red Snake Wall was later built). Given that captives from the ten tribes of Israel were placed in the Caspian Sea region, one would expect their Semitic descendants to be found in that region centuries later. The White Huns’ capital was named Sakala, and the Greeks called them the Ephthalites, the Hephthalites, or, as my book notes, even the Nephthalites. These sequences of consonants are, unmistakably, the Israelite tribe of Naphtali. The tribe of Naphtali was originally taken captive into Asia by Assyria in one entire tribal band (II Kings 15:29), so it is logical they maintained a cohesive tribal identity into future years.

At this point, major misconceptions need to be addressed. Many assume the ten tribes of Israel “died out” or that they were all Jewish. None of the ten tribes of Israel, who formed the northern ancient biblical kingdom called “Israel,” were Jewish. Indeed, the Israelites of the northern ten tribes were often enemies of the Jewish southern kingdom called “Judah.” The northern ten tribes abandoned “Jewish” practices long before they went into exile, so one should not expect to see Jewish practices among their Asian descendants–many of whom were sun-worshipers. Also, the Israelite tribes sent into Asia were not prophesied to die out, but rather to experience a huge increase in their populations after they went into exile. In Hosea 1, God tells the northern ten tribes they are being sent into captivity because they broke the covenant they made with God at Mt. Sinai via Moses; however, in verse 10, God pronounces a huge blessing on their exiled future descendants. God states that he will increase their descendants’ numbers to be as numerous as the “sand of the sea.”  This is a very important verse, as it confirms that God was still going to keep his covenant with the Israelite tribes to bless them with specific blessings that were their birthright as a result of God’s covenant with Abraham–a covenant that was unconditional. One of the blessings of the Abrahamic covenant was that the Israelites’ descendants would be as numerous as “the sand which is on the seashore” (Genesis 22:17), the exact blessing which was confirmed to the Israelite tribes in Hosea 1:10 even though they were being sent into captivity under the terms of the Mosaic Covenant.

This means the Israelites would experience a huge increase in population after they went into exile. Their numbers grew massively in the wide-open expanses of Iran and Southern Russia once they left the cramped quarters of the Promised Land in ancient Israel. It is due to this prophesied blessing of huge population increases that just one tribe, the Naphtalites, became so numerous and powerful that they were able to fight the Sassanians on even terms for a couple centuries before the Naphtalites also migrated westward toward Europe. Their modern descendants are located and named in my book, Israel’s Tribes Today. One more notable fact: The capital city of the Ephthalites was named Sakala, which includes the name of the Israelite patriarch, Isaac. While the Greeks rendered this name as “Sac…,” the Persian and Semitic language groups often rendered his name as “Sak…” This is a vital clue to the White Huns’ Israelite origin as Genesis 21:12 promised that the Israelites would be named after Isaac, and that name has been associated with Israelite descendants ever since–including the Ephthalite White Huns.

I hope that readers benefit from this insight into the location and name of just one tribe of the ten tribes of Israel approximately 1300 years after they went into an Asian exile. Keep two very important facts in mind if you research the White Huns in historical literature. Since the historical information about them is almost all derived from the ancient propaganda of their enemies, take accounts of their “barbaric” customs with a grain of salt. While the What on Earth? segment about them describes them as barbarians who rode on horses with the decapitated heads of their enemies on saddles, the fourth link records that the White Huns had a king, a constitution and standards of justice in their tribe. The second point is that modern historical sources and historians overwhelmingly must “bow the knee” to evolutionary fables and dare not mention any fact which substantiates the Bible’s narratives or prophecies. That is why the large mass of historical information about the post-exile Israelites found in ancient Greek, Roman and other sources is censored out of history books. My books on the history and modern locations of the ten tribes of Israel compile and proclaim all the forgotten and suppressed historical accounts about the ten tribes of Israel, and all historical sources are given with complete bibliographies and chapter endnotes so readers need not take anything “on faith.” An E-book about the history of the ten tribes of Israel can be ordered at my website’s home page as well as an extensive 4-book set on this same topic. If you obtain them, you will have a new perspective about ancient history that is vitally important to understand world history as well as modern geopolitics. When you have that information, you will understand why this important information is being suppressed in modern times.