The American Civilian Population Is Arming for War 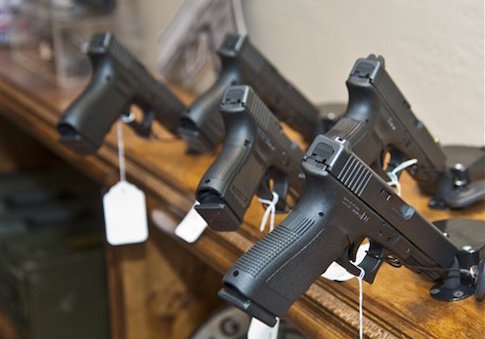 I just read some online articles with information that I felt should be passed on to readers, along with some biblically based comments about some very critical subjects as we Americans near our D-Day of an election.

The American civilian population is arming itself at an increasingly accelerated rate that keeps setting new records for gun sales every month. The first link reports that new gun checks through the FBI’s quick check system increased to a new all-time high monthly total in October. There were “2,333,539 gun-related checks” through the FBI’s checking system, but this does not include private sales and has some other qualifiers in the total. In order to offer a comparison of the rate at which gun sales are increasing, the second link reports that June 2016 saw 2.1 million gun-related checks which were “600,000” more than June of 2015. That means monthly gun sales reports have gone from about 1.5 million per month in June 2015 to 2.3 million per month in October 2016. The number of gun sales checks does not reflect an exact number of guns sold. Since each check can include one or more guns, the number of guns sold is surely higher than the number of FBI gun checks.

The third link reports that “110,000,000 Americans report having a gun in their home.” That is the number that admitted having guns. The number having guns is likely considerably higher as many Americans won’t admit to anyone they have a gun for fear it will go into some government database. The link cites fears of gun control measures by President Obama and Hillary Clinton have skyrocketed sales of guns, and they are quite right, in my judgment. The first link opines that if Hillary Clinton is elected, gun sales will leap even higher. I think that is a safe bet. If Hillary Clinton is elected, the time between November 8 and the date in January when she would take office will likely see a flood of gun sales that will shatter all previous records. This would make Hillary Clinton the best gun salesperson in history.

How many guns do American civilians own? The fourth link estimates the US civilian population owns 270,000,000 of the world’s 875,000,000 “known guns.” That phrase “known guns” is a squishy description which could include military-owned guns. Other links I’ve read put the US ownership of guns at 300,000,000 and constituting perhaps half of all known guns in the world’s civilian population. It is a number which is hard to know for sure. I have no doubt that there are many old guns not included in this count which are still very functional within the USA. Keep in mind that the above totals are only for legally purchased guns. How many illegally obtained guns do the drug cartels and all the gangs have in their possession in the USA?

Clearly, a fear of gun control or gun-confiscation efforts are driving the spike in gun sales. These fears have created a genre of websites and warnings from writers that if Hillary Clinton is elected, it will lead to (A) massive gun confiscation like what occurred in Australia or (B) the second American civil war if option A is attempted. There are also various warnings about the UN sending soldiers to disarm Americans and secret camps that have been built to house the USA’s Christians. Let’s address these fears from a biblical basis.

Option A has little likelihood of happening as the USA has a Constitution that guarantees civilian ownership of guns. Australia has no such Constitutional right. If Hillary Clinton is elected and tries to seize everyone’s guns, she will almost surely be impeached and even Congressional Democrats from gun-owning states will be hard-pressed to support her. Let’s not forget the uniformed military of the USA has sworn an oath to “protect and defend the Constitution from all enemies, foreign and domestic” if I recall the language correctly. The military does not swear an oath to the commander-in-chief, but rather to the Constitution. If Clinton tried to subvert the Constitution, she would become a “domestic enemy” of the Constitution to be opposed by the military. Genesis 49:22-26 prophesies that the tribe of Joseph (Ephraim and Manasseh) will inherit and possess the Abrahamic “birthright” blessings of prosperity, natural resources, etc. in the latter days. There is nothing in that prophecy which foretells any possibility of any civil war in Manasseh (the USA) during the latter days, so I don’t believe one will occur. Genesis 48:14-20 also prophesies that while Ephraim would grow into a “multitude of nations,” Manasseh would “become a people” (i.e. one nation). The Israelite tribe of Ephraim became the British nations: England, Canada, Australia, New Zealand, etc. while its brother tribe of Manasseh  became the single great nation we know as the USA. [As a sidebar, I’ll comment that I think this prophecy that Manasseh would be a single nation doomed the Confederacy in the US civil war. God had to intervene in that conflict’s outcome to make sure the USA was one nation in the latter days. The usually-brilliant generalship of the Confederacy turned into rash and reckless actions by Generals Lee and Stuart at the battle of Gettysburg. I believe God intervened to cause those mistakes because without them, the Confederacy could have won that battle and the war. But, I digress…] Also, the UN hasn’t got enough spare soldiers to confiscate the guns in even one major American city. Most of the UN’s member nations can’t even protect themselves very well. They do not have a vast reservoir of soldiers standing around doing nothing that can be sent to the USA for a suicidal effort to take everyone’s guns. Regarding claims about secret camps scattered all over the USA, that is a plausible reality. However, I have opined on previous posts that there are other possibilities for their existence is: (A) large camps in case American cities have to be evacuated due to a major and credible threat of a nuclear weapon being exploded in a city or cities by terrorists, (B) large camps in the event of major natural disasters such as “the Big One” earthquake in either California, the New Madrid, MO area or somewhere else, or (C) quarantine camps in the event of a major disease epidemic that strikes the nation due to natural events or the acts of terrorists deploying biological warfare agents around the USA which requires mass quarantining of infected Americans.

One more biblical thought about the immense gun-ownership rates in the USA. Much of the USA’s civilian population is now sufficiently armed for a war. What war? God has allowed or guided this mass gun ownership to occur in the USA. Is the USA about to have a second civil war? As explained above, I don’t see it in biblical prophecy. However, I do see such a war in Ezekiel 38-39. That prophecy foretells that in the latter days, the nations of the “house of Israel” (Ezekiel 39:12, 22 and 25) will be attacked by the Gog-Magog alliance of Russia, China, Iran, etc. This will include all the modern nations descended from the house of Israel (the ten tribes), but especially a nation which has vast “waste” areas (i.e. wilderness regions) and is a land “from sea to shining sea” (a great western and eastern sea–Ezekiel 38:8 and in a parallel prophecy in Joel 2:20 about the same event). That nation primarily is the USA, the leading nation of the modern western alliance–which has been Russia’s enemy/rival since the end of World War II. This makes perfect sense in today’s modern geopolitics. I do not claim to know what year this event will occur, but there are major biblical events (the fall of Babylon the Great’s modern global system, the rise of the global beast system, the revealing of the beast and false prophet, the ministry of the Two Witnesses) which, in my opinion, have to occur before Ezekiel 38-39’s prophecy is fulfilled.

After this great prophesied world war occurs, Ezekiel 38:2 prophesies God will say to the Israelite nations being attacked that they should grab their personal weapons and fight back (“I will call for a sword against him [Gog] throughout all my mountains [nations].” Russia and her allies have learned from the history of World Wars I and II. In each case, the battles were in Europe, Asia and Africa which allowed the USA to be the un-invaded “arsenal of democracy” to gather its strength and convert its vast factories to make weapons for the allies. The Gog-Magog alliance will not allow that to occur again. Today, Europe is weak and it will fall into the Gog-Magog alliance’s hands like ripe fruit if the USA falls. The USA has been weakened by decades of lousy leadership which has seen America’s factories exported to China and other nations. The USA no longer has a vast manufacturing base to convert to wartime industries. The advance “disarming” of America has included the dismantling of US factories and their relocation to China and other nations. I don’t think this is coincidence. If Donald Trump is elected, he intends to reverse this situation quickly. If he is elected, the USA will likely have a reprieve in its decline. The Gog-Magog alliance desperately wants the US civilian population disarmed by their own knowing agents or unknowing dupes in the US government before the great invasion prophesied in Ezekiel 38-39 occurs. Ezekiel 38:21’s prophecy argues that effort will not succeed. If a vast disarmament occurred, the inhabitants of the invaded major nation would have no “swords” (personal weapons) to grab and fight back with. God inspired his prophecies for an ultimate fulfillment millennia before they were to be fulfilled in the latter days. God can “plan ahead” to make sure his prophecies are fulfilled (Isaiah 41:21-26, 42:9 and 46:8-11). I believe that when the US Constitution was drafted, God guided the process to make sure there was an inviolable right for the civilian population to have personal firearms because he knew their descendants would need them badly when Ezekiel 38-39 was fulfilled generations later.

I won’t predict who will win the American presidential election. We will know the outcome very soon, and I will doubtless have a commentary about the result, whoever wins.

For new readers of this blog, some of the above terminology may be unfamiliar to you. If so, I suggest you read my free article: What Ezekiel 38-39 Reveals about a Future World War III and either read my well-documented books about the history of the tribes of Israel throughout all historical periods or listen to my free audio messages about the vital information in my books.

I’ll finish with one prediction I think is a safe one. If Clinton is elected, gun sales will reach phenomenal levels because the US population will fear gun control measures. If Trump is elected, gun sales will plummet because Americans know he is pledged to support the 2nd Amendment to the US Constitution. Since America is already awash in guns, how many more do we really need for Ezekiel 38:21 to be fulfilled? Maybe we have plenty now for God’s prophetic purposes. For this reason, I hope for a Trump victory and I voted for him as well. I’m sure he will win my home state (South Dakota), but we have only three Electoral College votes. Much bigger states will decide the outcome of the election.