TEST OF PIG ORGAN TRANSPLANT TO HUMAN [A BIBLICAL PERSPECTIVE] 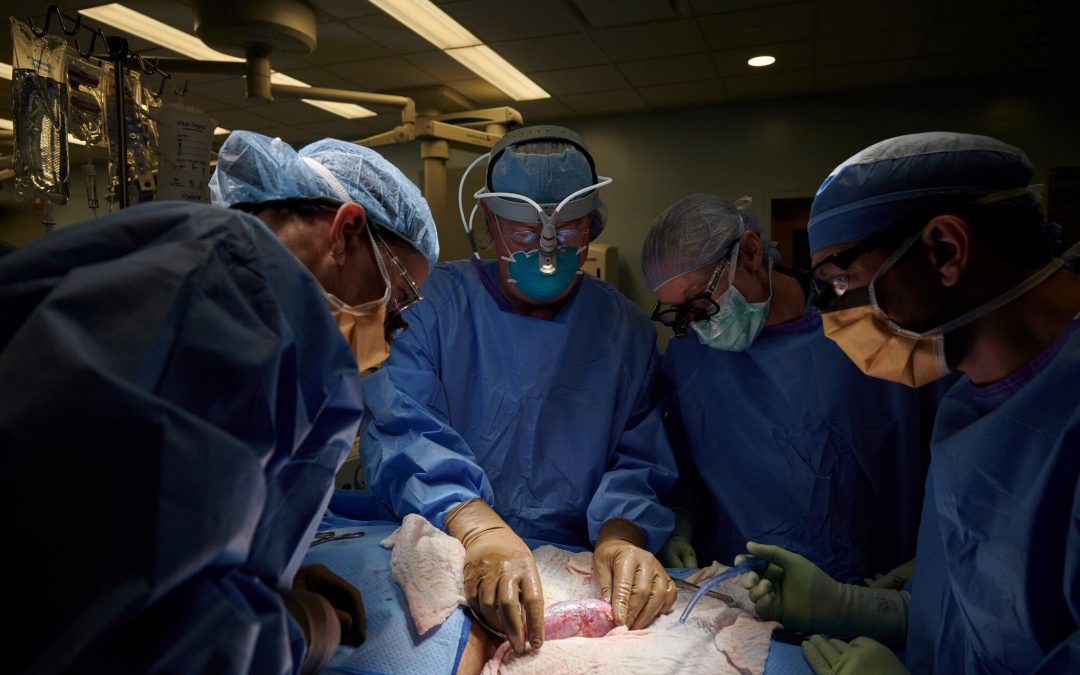 There is a scientific development that has been going on for years which is being hailed as a way to prolong human life, but, from a biblical point-of-view, it is perceived by the Creator God as a provocation which could eventually provoke Divine outrage and destruction upon humanity. This entire process has happened before, and it ended very badly. In Matthew 24:37, Jesus Christ prophesied that the latter days of our age would be a mirror image of the pre-Flood world of Noah. The scientific development to which I refer involves the creation of chimera species that do not exist in the natural world and trans-human combinations that mix human and animal DNA into single organisms.

The book of Genesis says very little about the pre-Flood world, but it does reveal that mankind had a sophisticated division of labor society as Genesis 4:20-22 relates that mankind’s society then had professional musicians, cattle-breeders and metallurgists. With metallurgy, they clearly had industries, machines and technology. The Bible gives us a hint of what the pre-Flood technology was like in its description of the immediate post-Flood society when mankind tried to rebuild the pre-Flood world before God forcibly divided mankind into nascent nations by placing them in new language groups and cutting them off from all secrets contained in the pre-Flood manuscripts, text books, blueprints, etc. that survived the Flood on the Ark. Genesis 11:1-9 describes this event. It states that God saw mankind was quickly developing technologies so advanced that “nothing would be restrained from them” unless he acted decisively. That is when God intervened in every human being’s mind to “download” (to use modern terminology) into them new, fully-developed verbal languages to stop their technological progress and force them to divide along language groups and spread across the earth. God deliberately did not give any of the new language groups a written language as he had to dramatically slow down mankind’s technological progress to keep his prophesied will for mankind on track. Matthew 24:37 shows us it was not God’s will for any new society of mankind to again have the advanced pre-Flood technologies until the very latter days of our current age. Genesis 11 states the “tower” at Babel was an erect structure of some kind whose head-most portion or “top…may reach unto heaven.” We have many such structures today. We call them rockets and their “top” portion that reaches into the heavens we call nose-cones or payloads… the tower of Babel was not a tall ziggurat at Babel; that would not have provoked God into dramatic action. Post-Flood mankind was building something akin to Cape Kennedy. There are many Ancient Aliens episodes on cable-TV that document evidence of high-tech civilizations in earth’s distant past. The Bible agrees they did happen, but it asserts that pre-Flood mankind or the immediate post-Flood mankind was responsible for these ancient high-tech civilizations.

The pre-Flood society also, according to Jasher 4:18, had learned the ability to “mix the species together.” In other words, they had the technology to mix the DNA of natural species together to make new ones that couldn’t occur naturally. To do this, they had to map and understand the genomes of each species, have high-tech labs and gene-splicing, CRISPR-like technologies, etc. There is no other way they could do that. Mankind is now replicating these advanced technologies, another proof that we are living in the biblical latter days. Genesis 6 records that mankind and the planetary species had degenerated so completely that God regretted even making mankind (verse 6), but he decided to save physical life via Noah’s family and all the species that were placed on the Ark. Verses 15-16 states God selected the males and females of each species and brought them to Noah and the Ark. Only God could see into each creature’s DNA and know if it had “pure” or “altered” genetics. God only wanted naturally-occurring DNA-based animal forms to survive. Jasher is a book not in the canon of the Bible, but it once was an accepted Divinely-inspired book (Joshua 10:13, II Samuel 1:18). I have read it and believe it now contains spurious materiel in the later chapters, but I find it an excellent complement to the Bible from Creation up to the time of Moses. Jasher 4:18 says the rulers of the pre-Flood society took women “by force” and used them (for selective breeding purposes, almost surely). These women may have also been used to deliver chimera species that were implanted into their wombs. Hitler’s Nazi society also practiced selective breeding of humans to achieve a “master race.” That same verse in Jasher says that the species of the air, sea and land were “mixed” together (i.e. genetically-altered species were commonplace). That verse also states God was very angry at the fact that “all flesh had corrupted its ways upon earth, all men and all animals (emphasis added).” God decided to wipe out all mankind and all species that were genetically-altered life-forms in any way. We need to realize that God chose the DNA “blueprints” for every species during Genesis Week’s re-creation of life on earth, and, as Creator of the earth and all species on it, he has the right to decide what species will be allowed to exist on it. Mankind does not have that right; mankind was to maintain the original creation as God made it (Genesis 2:15).

With the above introduction, I wish to discuss the topic in the title of this post. The media reported widely that scientists had successfully grafted a pig’s kidney into the body of a dying human being to see if a human blood supply could support the kidney from a “gene edited,” bio-engineered pig. The test was a success, and this has been hailed as a step toward a future where “gene-edited” pigs can be “farmed” to produce all kinds of organs and tissues to be transplanted into human beings. The first link reports scientists were trying to transplant baboon organs into humans in the 20th century, but those tests failed and the scientist moved on to using pigs instead. The first link reveals that pig heart valves have been transplanted into humans “for decades” already. It adds one prescription drug is “derived from pig intestines,” and that skin from pigs has been grafted onto humans as well. It adds Chinese scientists have inserted pig corneas into humans “to restore sight.” These genetic alteration techniques where pig tissues are being grafted into human beings are examples of actions which are being admitted. Who knows what other organs are being transplanted from pigs into humans which are not being acknowledged? The second link and third link offer more perspectives on these scientific human-animal transplant techniques.

These developments are hailed as scientific advances that will extend life by having pig/animal organs used to meet the human transplant demands. Perhaps the pre-Flood world started out the same way. It ended very badly for them, and it will for modern mankind as well unless we stop DNA-experimentation and “mixing the species together” as did pre-Flood mankind. Matthew 24:37 prophesies the pre-Flood society and our modern society will mirror each other, and Malachi 4 offers modern mankind a stern warning. Its time-context is the coming of the great and dreadful day of the Lord” (verse 5) at the end of our age. It states an “Elijah” work will be done on the earth to warn mankind and induce it to repent lest God comes to devastate the earth with a curse. This last verse in the Old Testament is rendered “utterly destroy” in the Living Bible and “complete destruction” in the Complete Jewish Bible. Mankind does not realize it, but in actively starting to “mix the species together” and create chimeras in our modern society, we are creating life forms never intended by God to live on this earth and it is inviting the same wrath that God brought down on the pre-Flood world.

Four years ago, I did a post specifically examining the spiritual ramifications of placing pig parts into human beings, and I have included it as the fourth link. It examines the well-documented subject of how personality traits from heart-donors are manifested in the heart recipients of human-to-human heart transplants. Will the transplants of pig or other animal organs and tissues into humans have a similar effect? That is a scary prospect. In biblical texts, it is clear that God is particularly revolted by humans eating “unclean” animals. The Old and New Testaments agree on this, as my previous post in the fifth link makes plain. Isaiah 66 is a prophetic chapter that foreshadows the future Messianic Age/Millennium on earth. It makes it clear in verse 17 that God will then forbid and stop any consumption of the flesh of swine, abominable animals, mice, etc. When you read Leviticus 11 and Deuteronomy 14, the chapters where God reveals what animals are clean and unclean in his sight, it is clear that the list shows that any animal which will eat carrion or dead flesh is on the unclean list. If the Creator God is highly offended by humans eating pig flesh, what do you think he thinks of actually transplanting pig animal parts into human beings?

The subject of clean/unclean meats is exhaustively examined in the fifth link (please note that a “Part 2” segment can be clicked on at the conclusion of the post’s Part One on this subject). If mankind and all other creatures simply evolved by dumb luck and chance, as evolutionists would have us believe, and there is no God, then it would make no difference what animal tissues are used for transplants into humans. However, Charles Darwin first saw living things as the results of adaptive tissues changing over vast amounts of time. Darwin had no idea that each creature was individually “blueprinted” by the DNA in all its cells. The fact that all living creatures are DNA-blueprinted to be what they are confirms that all fleshly creatures are created by a Creator to be exactly what they are. Once you realize there is a Creator God, the scriptures in the Bible and the related warnings in the book of Jasher need to be taken seriously. To prove to yourself that we are living in a key prophetic time at the end of our age, please read my article, Are We Living in the Biblical Latter Days?