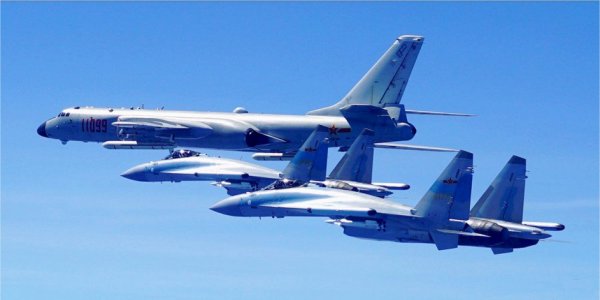 While the world’s attention has been focused on the Mideast, the crisis within the EU, the Trump-Kim summit in Singapore, etc., events in the South China Sea keep sliding relentlessly toward a future military confrontation. China, as I’m sure readers realize, has seized several small islands in the South China Sea and expanded them into become military bases for Chinese military forces. Recently, China practiced landing a strategic bomber on one of these South China Sea islands (first link). The words “strategic” usually means nuclear-capable. This is a highly provocative act by China. Chinese spying on the USA and other nations is also steadily increasing (second link). China also recently gave a top medal to Russia’s Vladimir Putin as a token of the close alliance and strategic relationship that has formed between those two nations (third link).

The USA is responding to these Chinese actions. The USA has conducted Freedom of Navigation flights and voyages very close to the Chinese-occupied artificial islands to demonstrate the USA does not recognize Chinese sovereignty over the South China Sea, but sees that body of water as the international maritime route it has traditionally been. To emphasize this point on a stronger scale, the USA recently flew B-52 nuclear bombers over or near the Chinese islands to demonstrate that the islands would be targets in any future war (fourth link). The US Pacific Command also changed its name recently to the Indo-Pacific Command to reflect that the fact that the US military has a steadily-growing interest in the Indian Ocean as well (fifth link). China has been seeking to isolate India in the Indian Ocean region by putting military bases in Pakistan and Djibouti and courting Myanmar and Burma. India and the USA have been steadily drawing closer together as China and Pakistan become more threatening to India’s interests and national security. Other nations are also watching the growing threat to international commerce in the South China Sea posed by China. Europe has major maritime interests in the South China Sea region as it needs that transportation corridor for goods shipped to and from Europe and Asian nations. Recognizing this, the British and French navies have sent warships through the South China Sea to also support Freedom of Navigation rights in that region (sixth link).

China has reacted angrily to the American and allied efforts to ensure the South China Sea remains an international maritime transit route for all ships (seventh link). In my view, this demonstrates a major manifestation of chutzpah by China. It is China that started this crisis by militarizing artificial islands in the South China Sea and seeking to claim sovereignty over almost all of it. Why should it be angry that the USA and allied nations monitor and oppose China’s territorial grab?

India has also been taking steps to create more alliances in the Indo-Pacific region as a counterweight to China’s militarism. India and Vietnam have drawn their military forces more closely together (eighth link), and India’s Prime Minister Modi recently cemented close ties with Indonesia in a state visit to that nation (ninth link).  One more step has been taken by the USA and other nations to warn China that it is alienating many nations in the region. The RIMPAC naval exercises are a major major military event in which many nations and their navies conduct joint exercises to develop cooperative tactics and capabilities. China had been invited to recent such exercises to be an observer in the post, but China has been “disinvited” from the 2018 RIMPAC exercise (final link). This action does send a signal of growing disapproval and warning to China regarding its aggressive militarism.

Personally, I think there is an understandable reason for China’s steadily-growing military provocations. China has built an impressive number of new weapons system and it has a very large military force. However, its weapons and personnel are untested in actual battle conditions so China does not really know how well its new weaponry will really work against the USA and other military forces. China’s ally, Russia, has been developing new weapons as well, but it has had several opportunities to field-test its weapons under wartime conditions. Russia’s military forces in Syria and the Ukraine have been able to test new Russian weapons systems in those theaters of combat, but China has had no chance to test its weaponry under combat conditions. For that reason, China may actually want a regional war so it can test its new military weaponry in a regional war in the South China sea. If new Chinese weapons work as well as they hope, China may also invade Taiwan to seize that island as well as the South China Sea. I believe China especially wants a chance to fire its new supersonic cruise missiles, new classes of torpedoes and conventional ballistic missiles against a US aircraft carrier to see if they can sink it. China may be playing with fire if that is their intent. If China does sink a US carrier (with a high loss of American lives), I think the USA would fire new cruise missiles, guided bombs and conventional ballisticmissiles against China’s Three Gorges Dam to blow it up. If the dam is breached during a regional war, the damage to South China’s cities, factorizes, military bases and agricultural lands would be inestimable due to the freshwater tsunami that would result. China would suffer immensely for many years if it provokes other nations into such a retaliation vs. China in a major war.

These developments are entirely consistent with my long-held views that we are living in the “latter days” foretold by several biblical prophecies to be a time of unparalleled danger just prior to the return of Jesus Christ. Ezekiel 38-39, one major latter-day prophecy, foretold that an alliance would develop between Russia, China, Iran and allied nations in the latter days. That has been completely fulfilled in our modern time. That prophecy also foretells this Gog-Magog alliance will launch a surprise attack at the very end of our age against the nations of the modern ten tribes of Israel and their allies. These nations are found in NATO, the western world and their modern allies in Asia, as readers of my books already know. Although Ezekiel 38-39 accurately foretold the two great global alliances that would oppose each other at the end of our age, I do not believe that this great, age-ending war is yet in the offing. There are too many other intermediate prophecies which must be fulfilled first: The fall of Babylon the Great, the rise of the global beast power and the ministry of the Two Witnesses sent by God with miraculous powers (Revelation 11). However, please keep in mind that the prophecy in Ezekiel 38-39 does not preclude preliminary battles and regional or proxy wars between these two great alliances. We may witness such a war in the South China Sea in our foreseeable future.

For in-depth examinations of some of the above topics, please read my articles, What Ezekiel 38-39 Reveal about a Future World War III, Japan in Bible Prophecy, The USA in Bible Prophecy, The Two Witnesses and Are We living in the Biblical Latter Days? If your read these articles, I think you will be surprised at how accurate biblical prophecies really are, and you will conclude that only an all-powerful creator God could so precisely bring to pass prophecies written by inspired writers over two millennia ago.