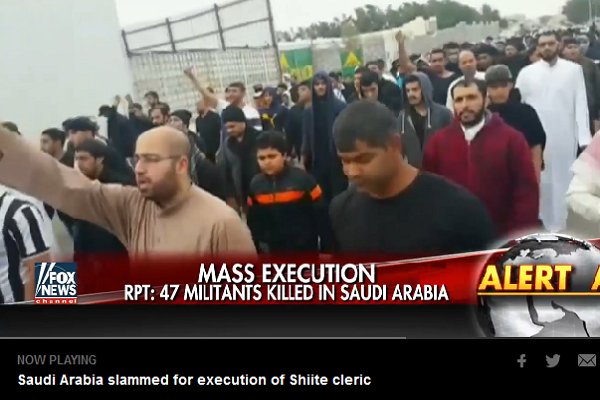 There are developments which indicate that ferment and tensions within the Muslim world are growing as we begin 2016. The possibilities of a major Mideast war or confrontation are increasing.

The first link reports that Saudi Arabia has just conducted a mass execution, and that one of the people executed was a prominent Shiite cleric. Iraq’s Shiite-led government and Lebanon’s government both condemned the Saudi actions as did Germany. [Since when did Germany become an actor in the Sunni vs. Shiite confrontations?] Since Iran is the leader of the world’s Shiite Muslims and Saudi Arabia is the titular leader of the world’s Sunni Muslims as it controls Mecca and Medina, and since Iran and Saudi Arabia already had very frosty relations after many Iranians (including prominent Shiite Iranians) died mysteriously in a recent pilgrimage to Mecca, the Saudi execution of a prominent Shiite cleric is clearly a “slap in the face” towards Iran. Saudi Arabia (with military help from the UAE and Egypt) is fighting the Iranian-backed, Shiite Houthis in Yemen so the Saudis are becoming more confrontational toward Iran. In executing a top Shiite cleric, Saudi Arabia has, essentially, thrown down the gauntlet to Iran.

The boldness with which Saudi Arabia is challenging or provoking Iran indicates that the Saudis are acting from a position of perceived strength that the rest of the world does not see yet. In many previous posts, I’ve noted the developing alliance between Saudi Arabia, Egypt, Jordan and Israel as all these nations are commonly and increasingly threatened by an Iran which is expanding its military power. The willingness of the Saudis to execute a prominent Shiite cleric, knowing full well that Iran will be angered, hints that the Saudi-Egyptian-Jordanian-Israeli alliance may be more formalized behind the scenes that the world now realizes. Something has definitely emboldened the Saudis vs. the Iranians and such an alliance would be a plausible explanation for that boldness.

Secondly, Nigeria’s elected new leader, President Buhari, a Muslim former general elected with Christian support, has been waging a tougher war against the Boko Haram Islamic terrorists in Northern Nigeria than his Christian predecessor. Nigeria’s new leader had recently declared the Boko Haram terrorists all but beaten, but Boko Haram just launched a terror offensive, killing at least 80 people and wounding many more in a wave of coordinated terrorist attacks across Nigeria (second link). One can expect that after this wave of attacks, the war of the Nigerian government against Boko Haram will intensify. This war has already periodically spread across national borders to affect the nations of Chad and Cameroon as well.

The war in Syria continues with its usual ferocity. Russia, the primary ally of Syria’s President Assad, has hit ISIL and other rebel groups opposing Assad with ongoing air strikes. Russia has announced that its warplanes recently hit 17 convoys of ISIL fuel tankers and that Russian airstrikes have wiped out approximately 2,000 ISIL fuel tanker trucks since Russia began its military intervention inside Syria (third link). All nations can see that “Putin is playing for keeps” in the Mideast, and also that Obama never was serious about hitting ISIL where it really would hurt them. Obama apparently never bothered to strike any of ISIL’s oil facilities, its long fuel convoys or its training camps until Russia intervened and embarrassed the USA into making at least a few more-serious air strikes against ISIL (see my previous post regarding “Obama’s “phony war” against ISIL). Assad is also allied with Iran, but Iranian forces inside Syria have been taking some major blows as top Iranian generals have been killed in that conflict (fourth link).

In another development which muddies the waters in an already confused Mideast political landscape, Turkey’s leader Erdogan has just taken an action which is quite disturbing. Erdogan recently made a statement in which he seemed to proclaim himself an Islamic version (or admirer) of Adolph Hitler and in which he echoed Hitler’s malignant anti-Semitism (fifth link). The fifth link includes an account from one of Erdogan’s past associates that Erdogan was a reader of Hitler’s Mein Kampf .The sixth link is enclosed as an example of how this story is spreading on the Internet.

As readers also surely know, a tall skyscraper in Dubai, a major city in the UAE (a key Saudi ally), turned into a “towering inferno” on New Year’s Eve. Perhaps the “torching” of a huge skyscraper in the city of a key Sunni ally of Saudi Arabia at a time when Sunni-Shiite relations are very rocky is only a coincidence. As of this writing, I have not seen any “official” reason given for this fire. Even if it was an act of Shiite terrorism against the Sunni UAE, would such a fact ever come to light? I do not know.

What is clear is that Sunni vs. Shiite tensions in the Mideast are growing, and the chances of a larger war are also escalating. Syria and northern Iraq are still “kill zones,” and Turkey’s Sunni Islamist leader Erdogan apparently wants to become some kind of Islamic “Fuhrer.” 2016 could become a very pivotal year in Mideast politics.