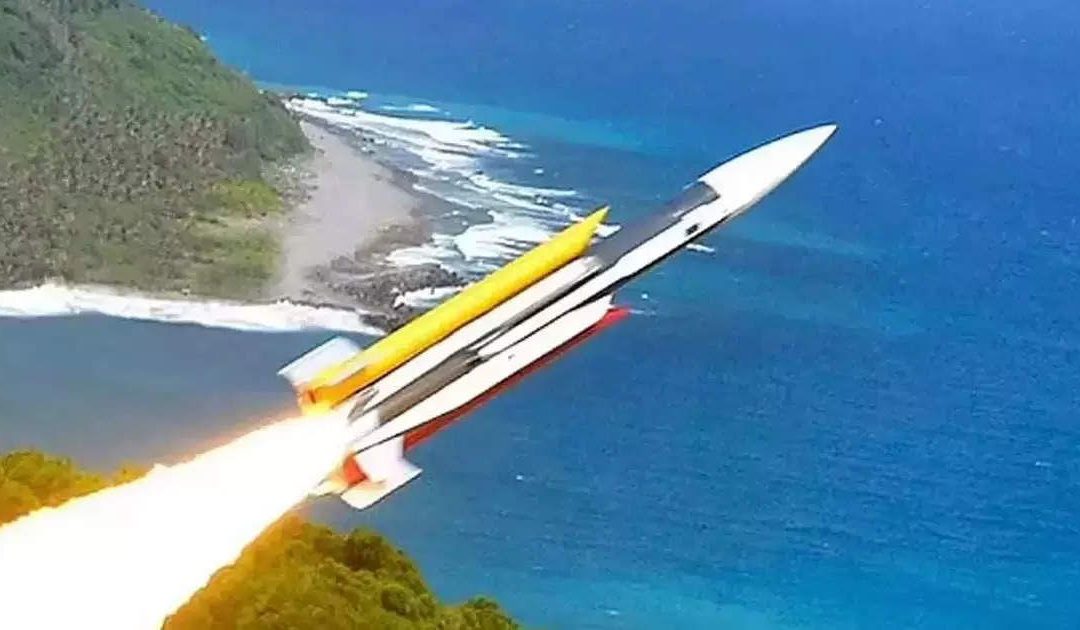 As readers of this blog know, China has made numerous and increasingly hostile actions toward Taiwan to intimidate it into submitting to China’s oppressive rule. Taiwan has just made a revelation which may be intended to give China a warning of what will happen if China tries to invade Taiwan.

Taiwan has revealed that it has a range of supersonic cruise missiles already deployed which can hit China’s mainland to a considerable depth. According to the considerable information in the first link and second link, Taiwan has been developing and deploying such missiles for almost two decades! The cruise missiles have several variants that can reach 500 or 1000 kilometers into Central and Eastern China. One report suggests Taiwan also has a missile variant that can hit targets 1200 kilometers into China. Taiwan is not likely to reveal the full range of its missiles, so the true striking distance of its missiles may be much further than reported. It is now known that Taiwanese missiles can strike Shanghai and Beijing as well as many military targets, city centers, strategic factories, etc. Indeed, a significant part of China is within range of Taiwan’s missiles. Since the missiles are supersonic, they would be hard to intercept by Chinese defenses. I wonder if Taiwan has missiles that can hit the Three Gorges Dam and China’s “secret” submarine bases on Hainan Island and other locations?

The links also reveal that the USA has hindered Taiwan’s ballistic missile program over the years, but Taiwan may have developed such missiles with non-American components. It is acknowledged that Taiwan makes the world’s best computer chips so Taiwan surely has the technological know-how to build ballistic missiles without American help or permission. There is no question Taiwan has the need for such missiles. The cited links also reveal that Taiwan has developed mobile missile launchers that can be moved around the island of Taiwan, making them hard for China to target. Taiwan could also have positioned dummy launchers in various places in Taiwan to confuse an attacking Chinese force. The third link reports Taiwan has also prepared for a military crisis by extending the conscription period for Taiwanese soldiers from four months to one year. The fourth link offers additional links with varying perspectives on this story.

Disturbingly, the fifth link offers information that Google may have leaked the location of some Taiwanese missile sites to the Chinese. There are increasing reports that Big Tech companies have aligned with China in various ways which threaten not only Taiwan, but also other nations and even American Constitutional liberties. It may well be that Taiwan leaked the information about its deployed supersonic missiles which can easily reach Chinese targets to gain a measure of deterrence against a Chinese attack. Taiwan has likely sent its agents into China over the last couple decades to stand next to fixed-position targets and take specific GPS information for those targets so they can be programmed into Taiwan’s missiles. It has also been consistently reported that Taiwan makes the most sophisticated computer chips in the world. Given this report, it may be that China, with inferior computer chips, may be surprised at Taiwan’s capabilities in the event China launches a war of aggression vs.Taiwan. Maybe Taiwan’s more-advanced computer chip technology has developed capabilities to “jam” the guidance systems of many classes of Chinese weaponry. That would result in a very rude surprise for China in the event China starts a war. It is highly unlikely, but not impossible that Taiwan could launch a preemptive strike of its own against Chinese targets if Taiwan sees a Chinese invasion is inevitable and imminent.

There is one key issue that needs addressing. China has many nuclear weapons; Taiwan reportedly has none. In an all-out war, non-nuclear nations lose to nuclear-armed nations. Taiwan needs nukes. The dangerous militarization of China is a major motivation for all smaller nations in the Indo-Pacific region to obtain their own nukes by legal or illegal means. Do you recall the many reports and worries about “loose nukes” when the Soviet Union fell? Reportedly, Soviet commanders left without pay were selling nuclear weapons and even small “suitcase nukes” on the Black Market in the early 1990s. If this was true, Taiwan would have had every motivation to be among the buyers of such weapons.  Allow me to offer some speculative possibilities. Given the immense number of workers and materials that were involved with the construction of the vast Three Gorges Dam, it would have been an intelligence coup if Taiwan, Japan, South Korea, the CIA or other agencies had embedded a small tactical nuke inside the Three Gorges Dam which could be detonated by an electronic signal sent from space, an airplane or a land source. Any nation could also have borrowed the concept of the “Dead Hand” system the Soviet Union had built into its nuclear weapons program wherein its strategic nuclear missiles would automatically launch if a signal was not regularly sent to the missile launch stations by specific human military personnel (sixth link). The seventh link shows that China is continually building new military platforms to defeat any American effort to defend or resupply Taiwan during wartime conditions. The link discusses a “Drone carrying mother ship” which could attack numerous American, Taiwanese and allied targets at the same time. Given how effective Iranian killer drones have been in the Russian war vs Ukraine, any such Chinese mother ship for killer armed drones would surely be a top target in any future war.

In previous posts before the Russian invasion of Ukraine, I pointed out that Russia and China had many weapons and a huge number of troops, but they were essentially “parade ground troops”–completely inexperienced in combat conditions. I suggested in those posts that Russia and China needed a regional wars to test their troops and new weaponry against American/NATO and allied military technologies. Russia initiated just such a test of its own military technologies when it invaded Ukraine. It expected a quick victory within days. Ten months later, the war is still raging on and Ukrainian military forces are more than holding their own against Russia. Russia has learned some very hard lessons. It thought its tanks and armored vehicles were state-of-the-art, but found out they were actually obsolete–easily destroyed by American, British and Swedish anti-tank weapons. Russia also learned its troops were ill-trained, badly-led and poorly-supplied. Russian logistics systems were practically in a state of collapse. China also still has hosts of “parade ground troops” and untested military weaponry. They may have similar bad surprises in store for them if they start a war with Taiwan.

The grim news is that there will be a major world war with Russia, China and Iran and their allies vs. the USA, NATO and their global allies. The former will attack the latter in a surprise attack. We can know this because it was prophesied in the chapters of Ezekiel 38-39, Joel 2 and other prophecies in the Bible. The Bible has incredibly accurate prophecies about what is to happen in our time called the “latter days”‘ in biblical terminology. These prophecies are examined in detail in my article, Are We Living in the Biblical Latter Days? The prophesied attack of Russia, China, Iran and their allies is also examined in great detail in my article/research report entitled, What Ezekiel 38-39 Reveals about a Future World War III. Because the biblical prophecies have been so accurate to date, can you afford to ignore what they reveal about what is going to happen in our future years? Even though they do not realize it, the nations are acting out a Divinely-decreed “script” which will unfold in our “latter day” time.