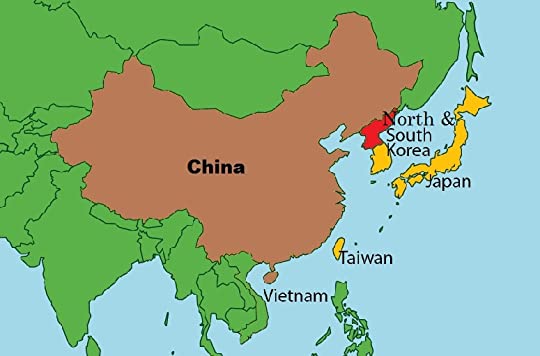 The dangers of a war in the Pacific region involving a Chinese effort to seize Taiwan have risen again. Indeed, the chance of war spreading to a wider region of the Indo-Pacific theater have also risen. The  trigger for the latest escalation of war-dangers is the visit of US House Speaker Nancy Pelosi to the island of Taiwan (first link). She is the highest ranking US official to visit Taiwan in 25 years, and her visit enraged China (second link). Ms. Pelosi also visited Japan, Singapore and Malaysia but the president of South Korea avoided meeting her when she landed there. After the USA significantly escalated tensions by having Speaker Pelosi visit Taiwan, China also escalated the threat level–conducting huge military maneuvers which almost encircled Taiwan. I saw some Internet reports that China even fired long-range missiles which traveled across Taiwan, but I could not find confirmation of this possible major escalation. If that is a true report, China has served warning that a military attack could come any time against Taiwan.

Coincidentally, a major meeting of the Indo-Pacific nations (ASEAN) was also scheduled in the same time frame as Speaker Pelosi’s visit. It was tense to say the least. The G-7 nations issued a statement that the massive Chinese military maneuvers near Taiwan were unjustified, and the Russian and Chinese Foreign Ministers walked out of the meeting when the Japanese Foreign Minister began his speech to the group (third link). It is a further escalation when the top diplomats of major nations refuse to even publicly listen to each other. Taiwanese spokespersons point out that China’s widespread military exercises indicate that China is contemplating military actions in regions lying beyond Taiwan (fourth link and fifth link). That assertion is credible as China may feel it can spread its dominance much further than Taiwan in a single regional war. If successful, it would isolate Japan in the Indo-Pacific region and make it harder for the “Quad” nations (the USA, Japan, India and Australia) to coordinate military cooperation in a regional war against China.

While not appreciated by many, the economic repercussions of a war between China and Taiwan and its allies would be very great. Much maritime trade occurs between the world’s nations in the Indo-Pacific region where any war would be fought. The sixth link examines the “bottleneck and supply disruptions” that would occur from any such conflict and that the many disruptions to civilian shipping traffic would raise “inflationary pressures” on a global scale. Notice also the words in this link about a “de facto blockade” of Taiwan by China’s navy. Taiwan, an island nation, needs to trade to survive. If China decided not to physically invade Taiwan but to blockade it so no maritime trade could get in or out of Taiwan, it is unclear how long Taiwan could last. It would create a situation where the USA and Japan would need to bust open that blockade with military force and a major war would be likely. The seventh link includes a war-gaming estimate that a regional war in the Indo-Pacific region near Taiwan would cost America the loss of a significant number of warships, including an aircraft carrier. The report also identified a major lack in the US weapons inventory–the USA needs far more anti-ship missiles than it currently has. The link has a 15-second ad at its beginning, but the analysis in the link is well worth waiting for the ad to end.

Any war in the region could also have unpredictable developments. While Japan has been consistently signaling it will help Taiwan defend itself against a Chinese invasion, South Korea may not help at all. The eighth link examines the possibility that South Korea will refuse to join a war against a Chinese invasion of Taiwan. If South Korea refuses to help Japan and the USA defend Taiwan’s independence from Chinese Communist rule, it could easily end the American-South Korean alliance altogether. American bases in South Korea would need to be replaced with other military bases elsewhere in the region. That is much easier said than done. However, if the USA loses thousands of military personnel in an Indo-Pacific war and South Korea refuses to help, American public opinion toward South Korean will greatly harden. South Korea owes its free existence to the USA as it was the USA which saved South Korea from North Korean/Chinese rule in the Korean War. If an ungrateful South Korea leads to a greater loss of American lives, I think you can understand the consequences would be severe. The US Congress may even vote to boycott South Korean trade goods if this happens. The American people would almost surely do so on their own.

China’s militarism and its growing nuclear arsenal is also having another possible result. The ninth link discusses the rising possibility that a variety of other Indo-Pacific region nations will pursue acquiring nuclear weapons if China attacks Taiwan. The example of Russia attacking the Ukraine is cited that unless a nation has nuclear weapons, it is vulnerable to attack by a nuclear nation. If China attacks Taiwan, expect more nations to develop nuclear arsenals of their own. The link examines which nations in the Pacific region may do so.

For years, I have maintained in my blog that both Russia and China have needed and perhaps wanted a large regional war to test their weaponry and military personnel against western weapons technologies. Russia has now done so by invading Ukraine, and Russia has encountered a major disappointment in learning its weaponry and troops didn’t perform anywhere near as well as the Kremlin thought would be the case. Tens of thousands of Russian troops have died and who knows how many have been wounded in the intense combat. It has been weeks since outside analysts have offered estimates of Russia’s casualties. Russia has also learned that its vaunted armored forces are unable to survive western anti-tank defenses. China may now want to test its soldiers and weaponry against western technologies. One thing in China’s tactical favor is that the more military equipment the USA and NATO send to Ukraine, the less military reinforcements western nations can send to Taiwan in any war.

There is one other “wild card” that may make war more likely. President Biden and his policies are very unpopular, and an election is nearing. Biden wouldn’t be the first US president to foment a foreign war to get the voters’ minds off a president’s domestic failures. If Biden and his advisors didn’t want Speaker Pelosi to go to Taiwan because it would raise the likelihood of a war, I think they would have sufficiently pressured her not to go. That Biden’s brain trust knew it would raise the likelihood of war if Speaker Pelosi visited Taiwan and that they made no serious effort to stop her makes this possibility more plausible. China also has major domestic economic problems. Leaders of all nations can have a motivation to start a war and blame the “foreign devils” for all the problems.

While the world overwhelmingly ignores the Bible’s prophecies, they are coming to pass with remarkable specificity. The Bible has many prophecies addressing events at the end of our age in a time called “the latter days.” It is easy to see these prophecies have come to pass. To see the evidence that this is true, I urge readers to review my article, Are We Living in the Biblical Latter Days? The Bible also foretells that a great, global World War III will climax the era of man’s self-government on this planet when divine intervention occurs which establishes a new Millennium/Messianic Age. The Bible prophesies how the war will start, what alliances will fight this war, the motive for the war, how it will end, the casualty figures for the losing side, etc. You may read all about the Bible’s prophecies concerning a cataclysmic World War III in my articles, What Ezekiel 38-39 Reveal about a Future World War III, the United States of America in Biblical Prophecy and Japan’s Role in Biblical Prophecy. The end-game for our age is now beginning, but only those who understand biblical prophecy will know how it will all unfold.