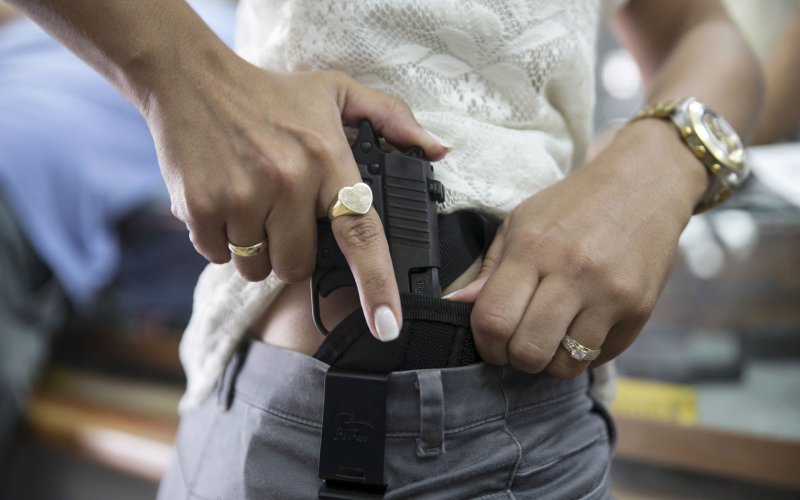 Recent media articles have reported that the already heavily-armed American and Swiss civilian populations are arming themselves to even higher record levels. There are two factors driving these surges in gun purchases by civilians, in my view. The threat of random terrorist attacks striking anywhere in the western world is behind many of these purchases. In America there is another factor. President Obama’s endless attacks upon the Second Amendment of the US Constitution (that guarantees American citizens the right to “own and bear arms”) has skyrocketed the demand for civilian purchases of firearms. Obviously, Americans are thinking: “We better buy all the guns and ammunition we want now in case Obama tries to stop us from buying them in the future.” Paradoxically, Obama’s desire to stop Americans from buying firearms has morphed him into the biggest gun-salesmen in American history! Hillary Clinton is now the Democratic nominee for President and she is, if it is possible, an even greater enemy of the US Constitution’s gun-ownership right than Obama was. Clinton reportedly is eager to try or invent some “executive authority” to decree that Americans can’t exercise their Second Amendment rights (first link). These factors drive the current gun-demand inside America to almost astronomical levels.

In Switzerland, its civilian population has embarked on a gun-buying spree as its gun-ownership laws offer wide liberties for Swiss citizens to own firearms. The second link documents the gun-buying spree in Switzerland and adds that guns are “ubiquitous” in Switzerland. In some ways, the Swiss nation is an armed militia. The article indicates that private guns and ammunition may be kept in residences, but “military” ammunition must be “stored in central arsenals.” “Military” ammo would be likely mean such ammunition as machine-gun rounds, mortar shells, artillery rounds, etc. Obviously, the Swiss see terrorism growing more rampant inside Europe and they want to be prepared to confront it if necessary.

The second link includes an interesting chart about the most heavily-armed nations on earth. The USA is listed as by far the most heavily-armed nation. The chart indicates that there are 88.8 guns in civilian hands for every 100 American citizens. When one deducts the number of children and teens, nursing home residents, the disabled, prisoners, etc. from the total, this may result in an average of about two guns per adult in the USA. The third link reports that gun sales in 2016 will break all previous annual sales totals. Indeed, gun demand in America is now so high that gun sales had already reached the highest annual total ever by the month of May, with seven months left to tally more gun sales! One reason why gun sales are skyrocketing in the USA is that women are increasing their gun purchases as well as men (fourth link).

Switzerland was third in civilian gun-ownership, and two other European nations, Finland and Serbia, were also among the five most armed civilian populations on the earth. I think the chart makes one glaring omission. It does not list Israel among the most heavily armed populations among the nations. It is my understanding that with universal military training for virtually all Israelis and a very large civilian reserve force, Israelis must also own a very large number of guns for the size of their population. If the current European nations continue to allow unchecked Islamic immigration into the EU, the demands for guns among their own citizenry will inevitably grow larger. If the current leaders stand in the way of European nations’ citizens being able to defend themselves, a lot of European nations may elect new leaders who will reverse the EU’s politically-correct policies of severely limiting gun ownership by their civilian populations.

This does have biblical implications. At the very end of our age, Ezekiel 38-39 prophesy that the Gog-Magog alliance (composed of  Russia, China, Iran, etc.) will launch a surprise attack upon the nations of the modern ten tribes of Israel and their allies (in general, the Western World). When this attack occurs, it will include an invasion of the nations of the western world. The Gog-Magog nations do not intend to just defeat the western nations, they intend to occupy them and turn the westerners into slaves or to exterminate them while they take all their physical wealth (Ezekiel 38:11-13).  In Ezekiel 38:21, God calls for the invaded nations to use their “swords” against the invaders. A “sword” was an ancient close range weapon, comparable to a rifle, shotgun or pistol today. In ancient terminology, arrows were sometimes called “missiles” as they were long-distance weapons. The USA was founded as the modern nation of Manasseh, the prophesied single great nation that would bear the name of “Isaac” in the latter days (Genesis 48:14-49:1). The British nations are the modern nations of Ephraim which were also prophesied to be great nations, but they would be a group of nations, not one single nation. They would also bear the name of “Isaac.” The Americans and British have long been known as the Anglo-Saxon nations. “Saxon” is a form of the ancient name “Isaac” which was upon the migrating ten tribes of Israel when they left the old Promised Land. Afterwards, the Greeks called them the “Sacae” and the Persians called them “Saka” (both terms being forms of the name “Isaac”). One of the cities of the ancient Parthian Empire, which was led by the ten tribes of Israel, was named “Asaak,” another form of the name “Isaac.” The Romans later called the Sacae/ Saka the “Saxons” or “Saxones,” names which have survived into modern times in the English language. Ephraim and Manasseh are just two of the many modern nations descended from the ancient ten tribes of Israel. Many more are found in European and Scandinavia.

The Gog-Magog alliance, when they make this eventual attack, will attack the USA with especial vigor to prevent it from coming to the aid of its European allies. They will attack out of the north (Ezekiel 38:15) through Alaska and Canada, just as American war-planners in the Cold War expected. Joel 2 is a parallel prophecy to Ezekiel 38-39. It also describes a military attack from the north against the people descended from Israel (the ten tribes) in the latter days just prior to divine intervention (all themes in common with Ezekiel 38-39). Joel 2:20 adds a detail not found in the Ezekiel 38-39 prophecy. It says the primary region inhabited by the attacked Israelites will be a land found between large bodies of an eastern and an “utmost” (i.e. western) “seas.” What nation in the modern world is known as the “land from sea to shining sea” with large seas on its eastern and western coasts? The USA, obviously. However, the British nations (England, Canada, Australia and New Zealand) are also nations with large eastern and western seas on their borders so this language in Joel 2 describes all the modern nations of the Israelite tribes of Ephraim and Manasseh. Ezekiel 38:12 also describes the land attacked by the Gog-Magog alliance as a people “gathered out of the nations.” Which nation in the modern world has often been called “the melting pot nation”‘ because it has received immigrants from so many lands? The USA, again. What modern nation was the primary rival of the Soviet Union/Russia in the Cold War? The USA, again. Biblical prophecies, given thousands of years ago, are proving very accurate in describing modern nations.

My books describe, in great detail, the migratory history and modern locations of all of the ten tribes of Israel. Anyone who asserts they will not be present among the latter day nations does not know his/her Bible as Genesis 49 and Revelation 7:1-8 specifically prophesy they will be found among the latter days nations. Readers can listen to my audio messages to hear the main points of the substantial evidence that is contained in my books on this subject. For a detailed examination of the latter day prophecies as they apply to the ten tribes of Israel, please read my article, What Ezekiel 38-39 Reveal about a Future World War III.

Ezekiel 38-39 prophecies that the Israelites attacked by the Gog-Magog alliance will have to use their “swords” against the invaders before and during the time God intervenes. The USA’s civilian population is now armed to the teeth and it includes millions of veterans with sophisticated military training. I’d say God has prepared the world scene so Ezekiel 38:21 can be fulfilled. My books identify Switzerland and Finland as being found among the modern Israelite tribes of Gad and Issachar, respectively, and they also have heavily-armed civilian populations. Other European nations allow citizens to own shotguns and other types of personal arms, but many nations have laws preventing citizens from defending themselves against attack. If there are more incidents of Islamic terrorism and crimes against European civilians by Islamic immigrants, demands for access to gun ownership will also rise throughout Europe. Maybe God is using modern events to eventually prepare all the modern nations of the tribes of Israel so they can fulfill Ezekiel 38:21 when they will very much need their personal arms to protect their nations.