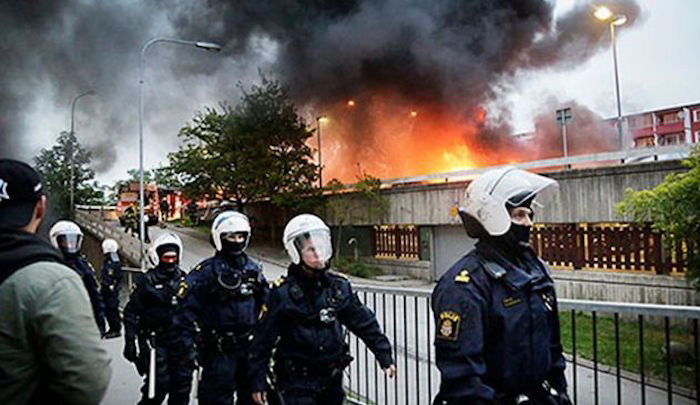 Sweden, which has accepted an unusually high number of Islamic immigrants compared to most other European nations, is experiencing such a crime wave and violent behavior by these immigrants that the Swedish police (and others) are at risk if they go there. According to the first link, second link and third link, there may be as many as 55 such “No-Go” regions in Sweden already. The links detail the kinds of crimes and assaults being perpetrated by the Islamic immigrants, who exhibit no interest in assimilating into the cultures of the European nations which graciously accepted them into their midst. The fourth link warns that Sweden is in danger of losing control of its own territory due to growing Islamic control over some areas of Sweden.

This is really very serious. What is happening inside Sweden is also happening inside other European nations, leading to many nations saying “enough” to any further Islamic immigration and some even erecting physical barriers to keep them out of their lands. While acts of Islamic terrorism in Europe have received major press coverage around the world, the crime waves originating with Islamic immigrants are not as well reported. However, news of these Islamic immigrant crime waves is certainly spreading inside Europe as anti-immigrant, anti-EU parties are rising quickly in popularity with voters throughout Europe (as previous posts have documented). The fifth link reports on Islamic migrants attacking people inside the Netherlands. A previous post earlier this month documented the extent of the political traumas caused inside many European nations due to Islamic immigration so there is no need to repeat those links in this post.

As an update, today Hungary held an important national referendum on whether the Hungarian government should be able to resist any EU directives about Hungary having to take in an EU-mandated quota of the Islamic immigrants pouring into Europe. The vote was 98.3% in favor of supporting the Hungarian government’s refusal to accept the EU directives–that is about as close to a unanimous vote as I’ve ever heard of in a national referendum. Due to technicalities, 4% of the votes were disallowed and the turnout of voters was below 50% of the electorate, so the vote did not have an “official” force of law (sixth link). However, the overwhelming vote against Islamic immigrants entering Hungary greatly strengthens the hand of the Hungarian government in resisting EU mandates on the matter. That referendum result must also have sent shock waves throughout the halls of power all over Europe. There was to have been a re-vote in the presidential election in Austria today, but it was delayed until later this year due to the quality of glue being used in the ballots (seventh link). Hmm. Do I sense a delaying tactic here because the anti-immigrant candidate could easily have been elected?

I think it is certain that the national tourist offices in European nations afflicted with severe Islamic immigrant violence are not including that information in their sales brochures. However, this is being reported so widely in Internet media reports that the informed travelers of the world are surely aware of this problem. As this danger intensifies and spreads throughout Europe, it will really hurt the tourist revenues of European nations. When this happens, the EU and national European governments will have to act forcefully to restore “law and order” in their nations in order for their tourist-based economies to recover. Some major changes may occur inside Europe at that time.

Those of us in America cannot afford to shake our heads and wonder why the EU has created this problem by allowing so many Islamic immigrants into their region. President Obama’s policy has been to allow more Islamic immigrants into the USA and Democratic presidential candidate, Hillary Clinton, seems poised (if elected) to continue the same policies of Obama and the EU which have created such major internal problems for western nations. Republican presidential candidate Donald Trump clearly sees the dangers of illegal immigration, and is committed to stopping the problem if he is elected president.

There is a very clear biblical warning to the modern “covenant” nations which are descended from the ancient ten tribes of Israel which form the population bases of many modern European, North American and other western nations (as my books abundantly document and affirm). Deuteronomy 28 includes a listing of blessings and curses that will befall nations that either remember God and keep His laws or forget God and ignore His laws. Deuteronomy 28:43 contains this warning of a specific major problem that would befall those nations that forgot God and his laws. That verse says: “The stranger that is within you shall get up above you very high; and you shall be brought very low.” This biblical “curse” is happening all over the western world as formerly Christian nations abandon God’s moral laws and ethical commands. The Islamic immigrants are the “strangers” that are exalting themselves ever-higher above their host nations’ citizens and, so far, the western nations aren’t taking serious enough measures to correct the problems. Some European nations and many western nations’ voters are waking up to the dangers of allowing Islamic immigrants into their nations when those immigrants are intent on imposing their sharia laws on their hosts. Amazingly, some EU nations and many in the USA’s governing circles are acting to worsen this severe problem by allowing even more Islamic immigrants into western nations. The liberal and politically-correct governing and cultural elites demand that even more Islamic immigrants be allowed into western nations even though those Islamic immigrants are some of the least “tolerant” people on the earth and turn against their host nations’ culture as soon as they enter it.

If the West dies, it will be due to the twin terminal diseases of abandoning God’s laws and unleashing the bane of political correctness into their nations.