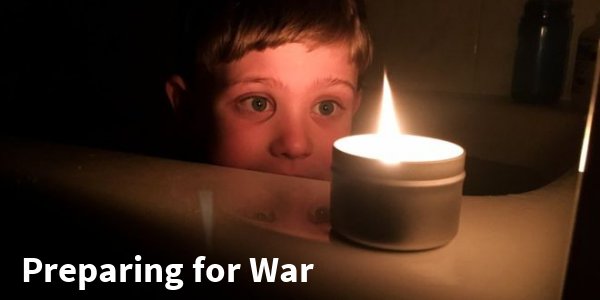 The government of Sweden has taken the extraordinary action of mailing a special warning pamphlet to 4.7 million Swedish households. It is entitled “If Crisis or War Comes,” and it gives the Swedish population tips on how to stock up on foodstuffs that will last during a national crisis, how to stay warm in the winter when/if electricity is lost, finding a bomb shelter in the event of attack, etc. The first link, from the BBC, indicates that Sweden’s action may be a result of growing concerns about Russian militarism in the Ukraine, the Baltic region and in waters near Sweden, etc. It reports that Sweden has begun to rebuild its military, instituting mandatory conscription (a military draft), and has considered moving closer to the NATO alliance. The BBC reports that Germany and Lithuania have also taken similar actions to warn their people about the need to make emergency preparations.

The second link and third link offer a different reason for the Swedish government to be worried about the safety of its citizens. The second link notes that Islamic extremists have become numerous in Sweden and that the police are now receiving 6,000 “extremism related tips each month.” It also reveals that 99.4% of Afghans who migrated to Sweden were male, and that almost half of them spent a year in Iran before migrating to Sweden. Given that Iran is aggressively supporting state-sponsored proxy/terrorist movements all over the Mideast, this raises the obvious question of whether Iran trained these Afghan males to enter Europe via Sweden to become agents of instability there or be the nuclei of sleeper cells to be activated in a future war? The third link has an English-language version of the Swedish warning pamphlet mailed to its citizens, and its contents may well be worth reading by everyone, regardless of where you reside. It also cites a Danish analyst who warns that “Sweden is in a state of collapse,” and is losing control of its own nation due to “Muslim Autonomous Regions” being formed within Sweden. The fourth link has an analysis of how dangerous the situation is becoming inside Sweden as grenades and other weapons are being smuggled into Sweden from Balkan gangs. It reports that grenades are now so common inside Sweden that they can be bought at a fairly cheap price. The fifth link focuses on the special dangers faced by Sweden’s Jewish citizens who are being overtly threatened by Islamic gangs and terrorists.

So why is Sweden sending warning pamphlets to its citizens? Are they concerned about a war with Russia or a civil war against Islamic terrorists and extremists within its border? The answer may be “yes” to both concerns as they are not mutually exclusive. There is a thread in some of these stories that Sweden is now in such danger due to the politically-correct gullibility of its leaders who took in so many Islamic immigrants without asking any questions. Finding out that many of them were trained in Shiite Iran before they entered Sweden is a major concern as these Iranian-trained extremists could fan out into other nations inside Europe from Sweden. As long-time readers of my blog realize, Iran is identified as a chief ally of Russia and China in the prophecy of Ezekiel 38-39 which foretells these nations and their allies will launch a global World War III attack vs the modern nations of the western world who are mostly descended from the patriarch Abraham and the ten tribes of Israel who went into exile in the 8th century BC and whose descendants did not resettle in the old Promised Land as did the Jews. Based on Ezekiel 38-39, it is not at a stretch to conclude that Iran has sent many thousands of Islamists agents into Europe via Sweden in order to destabilize Western nations. The crisis inside Sweden also affirms the “curses” God pronounced against the “covenant” nations of the tribes of Israel in Deuteronomy 28. Verse 43 of that chapter warns the nations of Israel that one of the curses that will befall them if they abandon and forget God is that “strangers” (immigrants) will enter their land and get “very high” while the native Israelite populations gets “very low” in their own nations. This is happening in Sweden now. Sweden is just one of many modern Israelite-originated nations which have forgotten God and his laws. The problems in Sweden already exist to varying degrees in many other European nations as well. Perhaps Sweden will join the list of European nations who have elected rightist, nationalist governments in response to the problems and unrest caused by incoming waves of Islamic immigrants who were largely unvetted. Its next election should be interesting to watch.

The pamphlet issued by the Swedish government likely has many excellent suggestions that all readers should be aware of, regardless of what nation you live in. I also suggest reading my article, Should Christians Prepare for Future Hard Times?, to read a biblically-based, common-sense approach to preparedness for the dangerous times which the biblical prophecies foretell lie ahead of us.