Sweden and Finland to Join NATO? 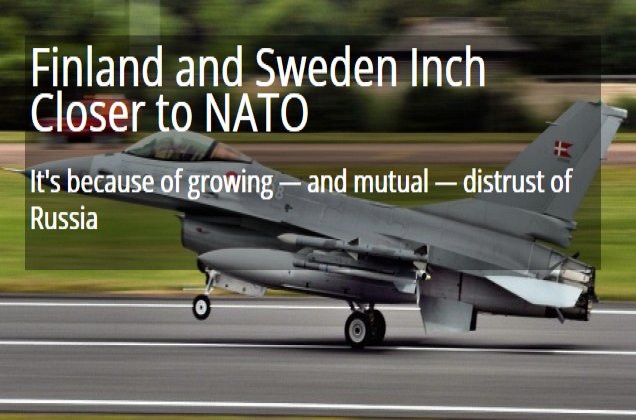 The two links below discuss the growing possibility that Sweden and Finland will join NATO. That possible action is being pushed toward a reality by Russia’s increasingly warlike actions in the Ukraine and its recent deployment of military forces to the Mideast. A warlike, resurgent Russia obviously makes small nations like Sweden and Finland nervous and feeling a greater sense of urgency about openly joining NATO.

As the links note, Sweden is already cooperating with NATO in many ways without formally being a member. Sweden apparently seems reluctant to join NATO unless Finland joins at the same time. Finland is more reluctant to join NATO as it directly borders Russia. However, as Russia becomes steadily more warlike, Finland may see no alternative to joining NATO. Doing so would obligate all the other NATO nations to come to Finland’s defense if Russia attacked Finland. If Finland doesn’t join NATO, none of the NATO nations are obligated to help Finland defend itself if it is attacked by Russia. With a warlike Russia emerging on its border, Finland may be driven to join NATO out of necessity. The Baltic nations of Latvia, Lithuania and Estonia have already recognized they have far greater security inside NATO than being outside of it. Finland faces the same reality. Finland’s becoming a part of NATO would greatly help the other Baltic nations feel more secure. If Sweden and Finland do join NATO, then all Scandinavian nations will be in NATO and NATO’s northern flank will be considerably solidified.

Russia faces a conundrum. It does not want Sweden and Finland to join NATO, but the more militarily aggressive Russia behaves in the Ukraine and in the Mideast, the more likely it is that Russia will drive Sweden and Finland into joining NATO. Russia may have to decide which priority is more important for its interests. My guess is that Russia will decide that keeping Assad in power in Syria so Russia can keep warm weather seaports in Syria for its naval vessels and having a larger “footprint” in the oil-rich Mideast is the more important priority. Whatever naval vessels Russia bases at Leningrad’s port, they already would have to pass a long gauntlet of NATO nations to have their vessels ever reach the Atlantic Ocean in a time of war. The Baltic Sea is also so far north that it is not a reliable warm weather port. So while the issue is not yet settled, the pressures driving Sweden and Finland toward NATO membership seem to outweigh any value of staying out of NATO.

From a biblical point of view, this development does indicate that the world is sliding steadily toward a major military confrontation in the future. Ezekiel 38-39 reveal a global World War III will occur at the very end of our age, but other lesser, regional wars may occur prior to then. If Sweden and Finland do join NATO, it will also have an interesting result from a biblical point of view. It will mean that every modern European and Scandinavian nation identified in my books as being descended from the ancient ten tribes of Israel will all be united within the NATO alliance. That would make NATO a truly “Israelite” alliance which would also include some other non-Israelite, European nations which likely have descended from Abraham via his final wife, Keturah.

Keturah had many sons and they produced many biblically-mentioned grandsons (Genesis 25:1-4). Abraham’s son, Isaac, received the “birthright” blessings given to Abraham by God (Genesis 25:5), but Abraham was foretold to be the father of “many nations” (Genesis 17:1-7). Abraham’s descendants in the modern world include not only the descendants of all the tribes of Israel, but include the Ishmaelites (the Arabs), the Edomites (Turks and other related peoples), the nations descended from Abraham and Keturah (which I believe are mainly found in eastern Europe and the Balkans) as well as the modern nations descended from the sons of Abraham’s concubines (which Genesis 25:6 relates were sent by Abraham to inhabit a region to the east of the Mideast. In previous posts and in articles, I have mentioned that I believe the Brahmins of India are descended from Abraham’s concubines who were sent to the east. The consonants of Abraham’s name are B-R-H-M, which are all found in the term “Brahmin.” Ancient languages generally did not write vowels in their scripts. If one places an initial “A” in front of the word “Brahmin,” one has the name “Abrahmin,” which is almost an exact representation of the name of Abraham. The Brahmins are also located to the east of the Mideast, exactly where the Bible records Abraham sent them.

It does seem that as we progress deeper into the latter days of our current age on earth, all the modern nations which include descendants of Abraham are being positioned by God to be in alliances that are opposed to (and threatened by) the Gog-Magog alliance. It increasingly appears that it is God’s will that no nation descended from Abraham will be present in the Gog-Magog alliance listed in Ezekiel 38:2-6.