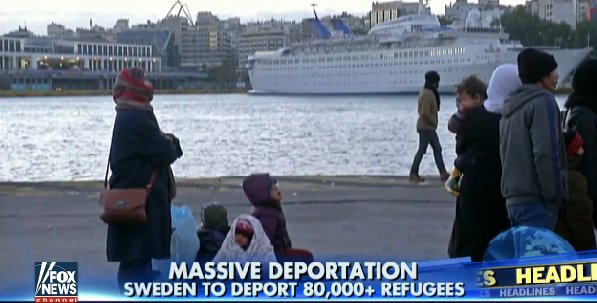 This post is to briefly update readers on developments in the growing crisis caused by the uncontrolled waves of Islamic immigrants pouring into European nations. Previous posts have documented many of these problems and the actions taken by individual nations to try to protect themselves from the social and financial consequences of this “invasion.” Sweden and Denmark have made very public announcements or taken actions which are telling potential Islamic immigrants everywhere: “Don’t come here!”

The first link reports that Sweden has announced that rather than accepting more immigrants, it will be deporting up to 80,000 of the Islamic immigrants who have already come to Sweden. This deportation process will be staged over a period of time and not done at once, but, by announcing this to the world, Sweden has clearly said that it doesn’t want any more Islamic immigrants to come to Sweden. Those who do come risk future deportation.

Denmark’s Parliament voted overwhelmingly (81-27) to compel immigrants who come to Denmark to surrender all their assets over approximately $1,453 to the Danish government to help the government pay for housing and feeding them (second link). Sentimental items such as wedding and engagement rings will not be calculated into the value of assets immigrants will be allowed to keep. The landslide proportion by which the Danish Parliament passed this bill makes a very clear statement to Islamic immigrants: Don’t come to Denmark if you want to keep your money and valuables! How thorough does the search for valuables have to be according to this new measure? I haven’t seen any media article detail the application of this measure. Presumably, very personal searches will be mandatory to make sure that immigrants are not smuggling valuables into Denmark in their clothing or in any wallets, purses or luggage. Will body cavity searches be implemented too? As anyone who watches crime shows on TV knows, drugs and valuables can easily be smuggled across borders via swallowing them or hiding them in body cavities. Just the possibility of experiencing very intimate searches should deter many immigrants from attempting to enter Denmark. The second link also notes that Switzerland has already confiscated valuables from immigrants entering that nation, but it is unclear how pervasive such asset seizures have been.

The welcome mat that a compassionate Europe extended to Islamic immigrants is rapidly being rolled up all across Europe. If the waves of immigrants keep pouring into Germany, courtesy of Chancellor Merkel’s permissive policies, Germany is heading for an internal powder keg as the social, religious and financial tensions mount ever higher as more immigrants steadily enter that nation.

I do not claim to know how this crisis will end or be resolved, but we should all be watching this with keen interest to see what kind of political transformation occurs inside Europe due to the “invasion” of Islamic immigrants. Clearly, the EU institutions seem utterly inept in dealing with this crisis. This makes it ever-more likely that the EU will either collapse or be reorganized into a new entity. As my books and the free audio messages at my website document, many European nations are descended from the ten tribes of Israel, and the modern nations of “Israel” have prophetic roles for the latter days in Genesis 10, Ezekiel 38-39, Revelation 7 and many other prophecies. How this immigrant crisis unfolds could affect how latter-day prophecies get fulfilled.