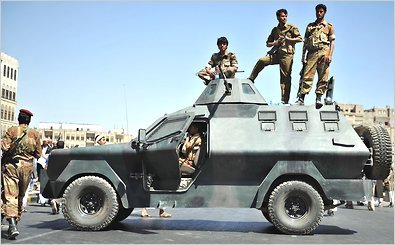 The proxy war in Yemen between blocs supported by Shiite Iran and the Sunni Saudi-UAE bloc is taking on a global flavor. The Saudi-led, Sunni bloc is slowly pushing back the Iranian-backed, Shiite Houthis in Yemen, but I think the war is taking longer than the Saudis expected. A new “wrinkle” has been added to the conflict.

The New York Times reported that the United Arab Emirates (UAE), part of the Saudi-led Sunni coalition, has been hiring Latin American mercenaries to assist them in their war against the Houthis (first link). This report details the training of the Latin American mercenaries has been an on-going project for some time, but came to light recently when they were actually deployed for combat in Yemen. Reportedly, they are issued dog tags from the UAE when they head for combat assignments. It has also been disclosed that 400 Eritrean mercenaries have been enlisted in this effort. The second link reports that as many as 800 Colombian mercenaries have already been deployed in “front line positions” in the important Yemeni city of Aden. I’m not sure what that means as media reports have indicated that Aden has already been liberated from the Houthis. Perhaps combat is still occurring in desert locations near the city.

It seems we are only now gaining an insight into how large this mercenary force is becoming. The third link reports that 1,800 Latin American mercenaries are now either deployed or are in training for combat missions under the UAE banner. In addition to Colombian mercenaries, there are reports of mercenaries also being recruited from Panama, El Salvador and Chile. No one really knows how many mercenaries are being recruited and how many are in remote training camps in the desert, far from diplomatic and media eyes. Since the New York Times article appeared, I’m sure that the satellites of several nations are being tasked to locate where these mercenary training camps are and how many soldiers-for-hire are being trained. I wonder how many Arabic-Spanish translation books have been imported into the Arabian Peninsula to facilitate this multilingual fighting force.

The need for the Saudi-led Sunni coalition to hire mercenaries to fight in Yemen indicates that (A) the Houthis are fighting more energetically than expected, (B) the Saudi-UAE, Sunni coalition doesn’t have sufficient numbers of their own fighters to deploy to Yemen, or (C) both possibilities are factual. Since the UAE and Saudi Arabia are Sunni Arab nations that face a hostile and powerful Shiite/Persian Iran across the Persian Gulf, both nations must keep the bulk of their forces in northerly positions to deter or resist an Iranian invasion.

This deployment of Latin American mercenaries to fight in the Yemeni war shows the increasingly-global aspect of the struggle between the two major power blocs being formed in the world. Now for a very relevant biblical digression.

The Russian-Chinese-Iranian bloc and their allies are dubbed the “Gog-Magog” alliance as their formation in the latter days of our age was prophesied approximately 2,500 years ago in Ezekiel 38-39. The other alliance is headed by the many modern nations of the ten tribes of Israel (found either in NATO or among the western nations) and their global allies. Since none of the descendants of Abraham are mentioned as being in the Gog-Magog alliance in Ezekiel 38:1-6, this argues all of Abraham’s descendants will be in the western-oriented alliance. This includes not only the USA (the Israelite tribe of Manasseh), the British nations–the UK, Canada, Australia, New Zealand and parts of the old British Empire nations (the Israelite tribes of Ephraim), France (the Israelite tribe of Reuben), much of Germany (the Israelite tribe of Gad), and the Scandinavian and Benelux nations (who compose other Israelite tribes). The Israelite tribe of Judah (the Israelis and Jews) is also in the western alliance. Abraham’s modern descendants also include the Arabs (the sons of Ishmael), the Turks and other ethnic groups (the Edomites), the sons of Abraham’s wife, Keturah, many of whom are located in Eastern Europe and the Balkans as well as the sons of Abraham’s concubines (i.e. his harem mentioned in Genesis 25:6 which were sent “eastward unto the east country” in Genesis 25:6). That language implies they went a considerable distance toward the east from the Levant and that would put them in Asia. India’s top caste, the “Brahmins,” (as I’ve noted in previous posts and articles), preserves the name of Abram/Abraham in their common consonants (vowels were generally not written in ancient languages). My books, articles and previous posts all go into detail in examining which modern nations are descended from which ancient peoples. If you have not done so, I urge you to read my articles, The USA in Bible Prophecy, Japan’s Role in Biblical Prophecy, and What Ezekiel 38-39 Reveals about a Future World War III, to gain information on the biblical identifications of modern nations). Readers can also hear considerably more information documenting the above identifications in my audio messages about the history and migrations of the ten tribes of Israel.

Abraham was promised that he would be the father of “many” nations (Genesis 17:5) and that his descendants would become too numerous to count (Genesis 22:15-17). Some “minimalists” very mistakenly assert the ten tribes of Israel disappeared into Asia and cannot be found. That is sheer nonsense! Hosea 1:10 records God’s promise to vastly increase the populations of the Israelite tribes after their exile to many locations when they left the Holy Land. Daniel 7 records Daniel bemoaning the fact that both Judah (the Jews) and “all Israel” (the ten tribes) had been scattered to many countries throughout the world when the old Kingdom of Israel fell. My books document that only about 1/3rd of the Israelites went into any Assyrian captivity. The rest migrated to the colonies of the Israelite/Phoenician Empire (located in Carthage, Spain, Europe, the British Isles, etc.) and to a new homeland north of the Black Sea to escape the Assyrians. My books document all these migrations from secular historical sources. Genesis 49 and Revelation 7 prophesy the ten tribes will all be present among the nations in the end of our age and the “birthright” tribes of Ephraim and Manasseh (the sons of Joseph) will be especially found among the rich and powerful nations in the latter days (Genesis 49:2-26). The apostles of Jesus Christ knew where the ten tribes were located on the earth. The Book of James was addressed to all of them (James 1:1). The Jewish historian, Josephus, asserted the ten tribes of Israel were located “beyond [the] Euphrates.” In doing so, he identified the Parthian Empire as the home of many of the ten tribes of Israel as they were the vast empire then located east of the Euphrates River, which was then the recognized border between the huge Roman and Parthian Empires. It was the huge Parthian Empire whose Israelite nobles were the Magi/Wise Men who traveled from the east to visit the Christ-Child in Matthew 2.

The point of the above digression is to make it clear that no one can possibly understand the Divine Plan which has been unfolding throughout world history or in the modern world unless you understand which nations and empires were Israelite throughout the last three millennia. My books, articles, and audio messages make these facts clear with abundant biblical and secular evidence.

To conclude this post, the fact that significant numbers of mercenaries from diverse parts of the world are being drawn into the Mideast region to fight against the Iranian bloc’s forces in Yemen confirm that this global confrontation is starting to “go global.” One last thought: President Obama and several western nations surrendered to Iran in a recent nuclear “deal.” Part of that deal includes the release of over $100,000,000,000 to Iran as financial sanctions are removed and Iranian assets frozen in overseas banks are released. [President Obama and his Iranian-born top aide, Valerie Jarrett, are proving to be some of Iran’s best allies]. When Iran receives an infusion of that much money, how many tens of thousands of mercenaries could Iran hire to fight its battles and where will their mercenaries come from? Mercenaries, throughout history, have been loyal to whoever pays them the most. To whom will the Latin American mercenaries be loyal if Iran tells them they can switch sides and fight for Iran at triple the wages that the UAE is paying them?