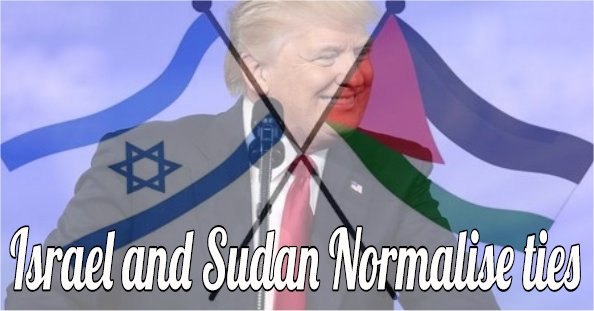 Previous posts have followed the accelerating “Abraham Accords” as more Sunni Arab nations establish diplomatic relations with Israel. As long-time readers already know, I’ve been anticipating just such a development for years due to the fact that Israel and the Sunni Arabs need each other to confront the rapidly militarizing Shiite Iran. The Sunni Arabs can wait no longer for the Palestinians to “make peace” with Israel and history has made it clear that the Palestinians have no intention of ever reaching a peace deal with the Israelis.

I think there is a hidden reason for the Palestinian intransigence. Before we examine the Israeli-Sudanese peace deal, let’s look at the background reasons why the Sunni Arab nations are de-coupling their foreign policy goals from those of the Palestinians. The Palestinians, throughout several US presidencies, have rejected one peace agreement after another to their own detriment. I think it was a former Israeli diplomat, Abba Eban, who observed: “The Arabs (Palestinians) never miss an opportunity to miss an opportunity.” There may be another reason why the Palestinians have steadfastly refused to ever agree to a peace deal with the Israelis. The first link, second link, and third link document something very important the major media have not discussed. The Palestinians have been openly aligning themselves with Shiite Iran and abandoning their past ties with the Sunni Arab nations. Palestinian officials, especially their Hamas wing, have been flying to Tehran to coordinate strategies with the Iranian leaders. It has long been known that Hamas’ weaponry is smuggled into Gaza from Iran just as Iran also supplies Hezbollah with heavy weapons. Iran’s stated goal is to “wipe Israel off the map,” and that fits perfectly with the Palestinians’ unrealistic goals for that same thing to happen. Iran has likely been goading the Palestinians for years to reject all peace deals with Israel as the Iranians were using the Palestinian “cause” to keep the Sunni Arab nations from aligning with Israel in a common front to resist Iran. Obviously, the Iranians do not want their enemies to come together in an alliance vs. Iran, and the Palestinian “cause” was actually Iran’s sub rosa means of keeping Iran’s enemies from forming an anti-Iranian alliance. It is my view the Sunni Arab leaders came to this conclusion as well. They have seen the steadily strengthening ties between Iran and the Palestinians so the Sunni Arab nations no longer feel constrained to leverage their foreign policy to the Iranian-Palestinian agenda.

Now let’s examine the latest advance in the “Abraham Accords,” via which the Israelis and Sunni Arab nations are drawing together and making common cause against Iran. The “Sudan” used to be one of the most anti-Israeli nations in the Arab world. Indeed, it was long a nation-state, which supported terrorist acts against the USA and was branded a state-sponsor of terrorism by the US State Department. Its long-time dictator was overthrown and a transitional government is now in power and it faces many internal problems. Seeing the benefits of drawing on Israeli know-how in many areas, especially agriculture, the current Sudanese government was receptive to joining the Abraham Accords. The “Sudan” needs to produce enough food to feed its people, and the Israelis are very good at “making the desert bloom.” The Trump administration deserves much credit for bringing Israel and the “Sudan” together, and it is truly a foreign policy coup for President Trump. That is why you will see the mainstream Leftist media give him underwhelming credit for this remarkable accomplishment.

The fourth link reviews the terrorist acts supported by Sudan in the past and adds that the Sudanese government has agreed to make reparation payments of $335,000,000 to past terrorist victims as a precondition for joining the Abraham Accords. That is another incredible achievement by the White House. The fourth link, fifth link, and sixth link give varying perspectives on this remarkable peace process. It is also reported in these links that President Trump indicated that “at least five other countries want to come into the deal [The Abraham Accords] in the future. Who might be next? My guess is the Sultanate of Oman may be next. The seventh link details that two years ago, Israeli Prime Minister Netanyahu, his wife, and the head of the Mossad personally visited the Sultan of Oman on a state visit. Since relations between Israel and Oman were friendly enough for a state visit two years ago, I suspect formal diplomatic relations may not be far off. Other possibilities include Morocco, Kuwait, Tunisia, and Saudi Arabia. Qatar might seem a possibility, but it is aligned with Turkey and Turkey is vehemently anti-Israel. Since Saudi Arabia openly approved the use of its airspace for airline traffic to take place between Israel and the UAE and Bahrain, the Saudis signaled that they approve of the Abraham Accords and are simply waiting for the best political time to join.

The Iranian/Palestinian fantasy of “driving Israel into the sea” will not happen; however, biblical prophecy indicates that they will try to make it happen. A huge army in Asia will invade westward (toward Israel and the Sunni nations) at the end of this age (Revelation 16:12-14). That Asian army jumps off from the area of the Euphrates River, the modern territory of Iraq, which is aligned with Shiite Iran. They invade westward and huge battles occur as part of an age-ending World War III all over the world. In the Mideast, Jerusalem will be attacked and partially occupied before divine intervention occurs to rescue the Israelis (Zechariah 14:1-14) and to destroy the attackers. Another Mideast battle will be in progress at Megiddo when divine intervention occurs (Revelation 19:11-20:4) so this account parallels the one in Zechariah 14. Remember the graphic scene in the movie, Raiders of the Lost Ark, when the flesh of the Nazis trying to seize the Ark of the Covenant are smitten and their flesh melts right off their faces and bodies? Zechariah 14:12 foretells that is exactly the way the great army of the “kings of the east” will die. As soon as that battle ends, the millennial Messianic Age will begin under divine rule. As Zechariah 14:16 prophesies, the world capital of the Messiah will be set up in Jerusalem. In Matthew 24:21-22, Jesus Christ prophesied that his return would prevent “all flesh” from being destroyed. Clearly, the eventual World War III will reach a point where mankind is nearing the point of self-extinction when God intervenes to stop it and end human self-rule on this earth.

I will not lose any sleep worrying that this war is imminent. The prophesied World War III will occur at the very end of this age and there are several major prophetic milestones that have to be crossed before we get to World War III. The current global political/monetary/financial system has to collapse (Revelation 17-18) and be replaced by a new global beast system which will have power for 42 months (Revelation 13:1-5), and God’s  Two Witnesses are scheduled for a miraculous ministry of 1260 days (Revelation 11:3-4) to give the world it’s, final warning before divine intervention occurs. However…Jesus Christ also prophesies that these latter-day timetables will be “shortened” to prevent the extinction of all flesh on earth. Therefore, biblical prophecy allows for Jesus Christ’s Second Coming to occur earlier than expected in the prophetic timetables. The parable in Matthew 25:1-13 indicates that is exactly what will happen, and that prophecy indicates it is far more important to “be ready”‘ for his return than to guess precisely its timing.