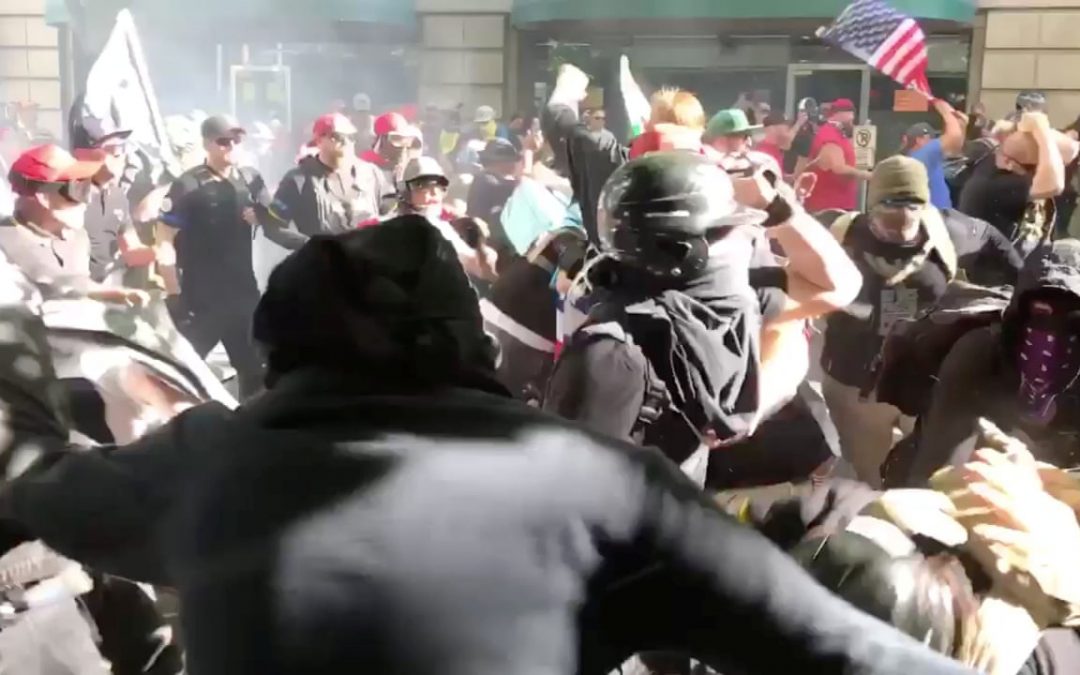 The polarization of the American nation was bad enough before the election. It may get worse in the aftermath of the American election when Joe Biden was “elected” with the help of all kinds of apparent vote fraud which is detailed on The Epoch Times website, but ignored by the Leftist media elsewhere. President Trump’s legal team is trying to remedy the vote fraud issues in the courts, but they are at a disadvantage. It is very hard to undo phony narratives and reverse outcomes even if those outcomes resulted from vote fraud. The Supreme Court may have the final say again, as it did in the 2000 election. A previous post-election post detailed some of the early hard evidence of vote fraud, but there are now so many examples of it on the internet that it is hard to keep up with all that has happened. However, this post is not intended to examine that issue; this post is to give to readers visual evidence that street clashes are beginning to erupt in American cities.

The street clashes captured on film in the first link surely reflect reactions both to harsh covid lock downs in some states which forbid businesses and citizens to make a living as well as to post-election anger. The first link offers a series of video footage taken at street battles that took place in Olympia, Washington, Denver, Colorado, Eugene, Oregon and St. Paul, Minnesota. Each video offers street clashes which took place between black-clad Antifa types and Leftists on one side and patriotic, flag-waving, pro-police demonstrators (I saw some “Blue Lives Matter” banners in the crowd). The clash in Olympia reportedly broke out after Antifa street gangs tried to burn a US flag and the patriotic crowd intervened to stop it. One of the videos shows an Antifa-type street thug spitting at conservative demonstrators. In the video of opposing demonstrations in St. Paul, one can see a cordon of police officers separating the two sides, but in the other videos there are no police in evidence. As far as I noticed, all the videos captured events that occurred in Blue States. I can mention that the audio of these videos can spill over into each new video segment so it is good to close one segment before viewing the next one. Some videos offer more than one view of the same clash.

In some of these video clips, it sounds like small arms fire is occurring in the background. A voice in one of the videos pronounced it gunfire, but no firm conclusion can be made. I did see a rifle being brandished in one video, but it was not being fired in the video clip. The use of various types of spray repellents is common in these clips, and it appeared to have been used by both sides.

These videos are likely only the tip of the iceberg concerning what could happen in American cities. American society is now more polarized than I have ever seen in my life. I am not optimistic about things getting better anytime soon. Perhaps we are heading for a situation where Blue States increasingly implement socialism and totalitarian, covid-related people-controls while Red States govern with Constitutional freedoms in place as much as possible while implementing covid protections that permit economies to function as open and normal as is possible. One thing is for sure: the video clips in the link do give us a glimpse of the anger that is currently simmering just below the surface in American society. Since it is impossible to know all the events that led up to (or followed) the clashes in the videos, keep in mind that these videos only offer a small slice of what occurred in these events.

In a related matter, I periodically read links which warn that truck drivers, for reasons of personal safety, might refuse to drive their rigs into inner cities or metro areas which are experiencing civic unrest, mass demonstrations and/or raging street battles. Some readers will doubtless recall a riveting image of a truck driver propelling his rig into a mass of demonstrators in the Twin Cities during the riots and burnings that took place there earlier this year (second link). Thankfully, I think no one was killed in that incident, but it graphically shows that personal safety is at risk if demonstrators clog up normal interstate traffic lanes that truckers routinely use to deliver their loads. If civil unrest makes it a dangerous thing for truck drivers to deliver their essential cargoes into inner cities, those truckers will have every right to refuse to deliver any loads to such cities until law and order is restored. If for any reason food and essentials stop flowing into a city wracked by civic disorder and violence, the situation will get much worse very quickly due to food, medicines and essential goods being effectively embargoed from a city that cannot control violence erupting inside its borders. While we can hope this does not happen, it is good to prepare for civic disruptions of any kind. Readers are advised to review my article, Should Christians Prepare for Future Hard Times?, which offers common-sense advice about preparing for such events.

[A word of warning: If the obvious and blatant disregard for proper social distancing guidelines during an urban street clash bothers you, you may not want to watch these videos. Some people in these clashes even forgot to wear their face masks!]