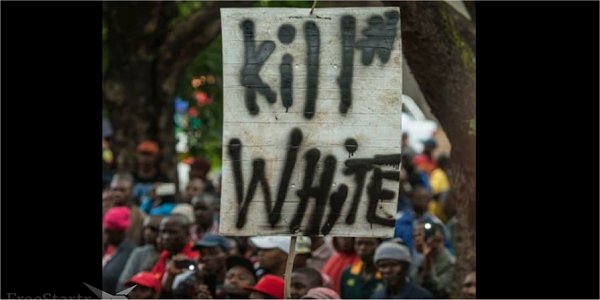 The continent of Africa tends to be overlooked in matters involving current geopolitics; however, this post will focus on a major crisis that is developing in South Africa which appears to be sliding toward a possible civil war. There are several factors here that, I think, that the world hasn’t realized is happening in that nation.

The African President, Cyril Ramaphosa, has been pushing a change in South African law which will allow his government to seize the lands of white farmers without compensation (first link). President Ramaphosa is also a leader of the African National Congress (ANC), which has governed South Africa for years. The second link indicates this land seizure program began in August 2018, and reports vary as to how rapidly it is going to be carried out nationally. The first white settlers came centuries ago to South Africa and their farms have been held by families for many generations, so they are in no mood to give up their family’s inheritance. The third link reports how violently the white South Africans are already being targeted. The narrator mentions some gruesome atrocities committed even against white children which will require a strong stomach on your part when you listen to his report. The third link also documents that a leader of the Marxist Freedom Fighters, an ally of the ANC, is among black leaders calling for a race war against the white South Africans. Indeed, you will see signs such as “Kill the Boer” in rallies to stir up people into fighting a civil war [The “Boer” is a reference to the white, mostly Dutch white settlers who originally came to South Africa centuries ago]. If you watch the entire third link, you will see that a civil war is a real possibility in South Africa. The narrator of the third link calls it an “imminent reality.”

The fourth link is a broad analysis of the dangerous situation in South Africa presented in a television news video clip. It reports that the leader of the Marxist group cited above has championed such slogans as “one bullet, one settler,” that the national murder rate in South Africa is now 49 murders per day, and that South Africa’s Indian community is also being targeted by the government and/or the black Marxist groups. It also reports that Australia’s government is considering fast-tracking visa applications for South African farmers who want to flee the growing threats in South Africa. However, I’d like to especially draw your attention to the segment that white farmers are hiring free-lance “Israeli special forces agents” to train farmers in weaponry and self-defense tactics. One such Israeli ex-special forces person appears on camera. No doubt, white farmers are taking a variety of self-defense preparations behind the scenes that are not being made public on TV broadcasts.

The fifth link offers additional perspective from an Australian TV source on the possibility that Australia might be a refuge for some white South African farmers, but its biggest revelation is that the king of the Zulu nation in South Africa (with 12,000,000 members) has offered to form a partnership with a group seeking to safeguard white farmers. The Zulus are South Africa’ largest black tribe, and a prospective alliance between the Zulus and white farmers would change the dynamics of the crisis in South Africa from a race war to a civil war between the African National Congress’ government and many of South Africa’s people. The Zulu King, Goodwill Zwelithini, is not in South Africa’s government but holds a great deal of influence over those in the Zulu tribe. If the black South African government of the African National Congress (with its Marxist allies) wage a war vs the white settlers and the Zulus, it is almost a certainty that the members of the South African military would have divided loyalties and would fight on both sides of any such civil war. More on the Zulu king’s desire, to form a partnership with white farmers, is found in the sixth link which indicates the Zulu king fears widespread starvation if the white farmers’ skills are not used to produce food for South Africa on their historic lands.

King Zwelithini has good reason to fear widespread starvation if the ANC’s government took over all white farmer lands. The ANC’s government, when it took over the nation after the apartheid period ended, so mismanaged the South African gold mining industry that it has all but destroyed it. South Africa, according to the seventh link, is so rich in gold that it “has produced half the bullion ever mined on earth.” However, under the ANC rulership of the nation, the vast majority of miners are now unemployed, gold production has plummeted and the industry is in a “death spiral.” It would appear the Zulu king has good reason to fear national starvation if the ANC took over the farmlands and did the same thing to food production in South Africa that it has done to gold production.

The threat of a possible South African civil war has now come to the attention of US President Donald Trump, who days ago asked his Secretary of State, Mike Pompeo, to investigate the issues of “land and farm seizures” and the “killing farmers” (eighth link). Now that the US President has taken personal notice of the dangerous situation in South Africa and his doing so will draw the world’s attention to the issue, it is my opinion that this will lessen the risk of a civil war; however, the situation is dangerous and the outcome of the crisis cannot yet be known.

There is a biblical connection to this crisis in South Africa. In my books, available at the home page of my website, I utilize the prophecy in Genesis 49 about the characteristics of all the tribes of Israel in the latter days to identify these tribes among the world’s modern nations. Some are very easy to identify, but others are more cryptic. One of the briefest cryptic prophecies concerns the Israelite tribe of Asher in verse 20 which states that it will be known for “yield[ing] royal dainties” in the latter days (King James Version). I think this version poorly translates this verse as the Hebrew word translated “dainties” can also be translated “delights.” What would characterize a land that “yields royal delights?” Throughout ancient history (when this prophecy was written) the foremost delight to any king was a gift of gold or gold in the form of tribute money from vassals or conquered nations. An aforementioned source stated that South Africa has produced “half the bullion ever mined on earth,” so South Africa is the nation most identified with gold production in our modern times. On that basis, I identify the white South Africans as primarily the Israelite tribe of Asher. White South Africans came primarily from the Netherlands, but some have also come from the British Isles. One of the sub-tribes of Asher was named the Heberites (Numbers 26:44-45). Since vowels were not written in ancient Hebrew, the consonants of this sub-tribe are H-B-R. These consonants are found in historic names found in the greater British Isles (Hibernia, Hebrides). My books also offer evidence that the tribe of Asher was also linked to mining activities in the ancient world, which is also applicable to South Africa in the modern world.

Since some of the Israelite tribes migrated in more than one subdivision during the time between their exile from the Promised Land and today, it would be unsurprising if God guided migrations in recent centuries to reunite tribes in the current world, which is the biblical “latter days.” The Israelite tribe of Manasseh, for example, went into exile in two separate main bodies. One half the tribe went into Asia in Assyrian captivity (II Kings 15:29) as “Gilead” was the ancient Israelite land east of the Jordan River (half the tribe of Manasseh lived in Gilead). The other half tribe of Manasseh, which lived west of the Jordan River, led a migration of several Israelite tribes from Palestine to the Black Sea region and maintained their freedom in a new location. They were called Scythians or Sacae by the Greeks, Saka by the Persians and Goths/Saxons by the Romans. They had to migrate into Europe when the vast Parthian Empire fell and the Parthians and their Scythian fellow tribesmen were forced out of Asia by the Sassanian Persians. The two halves of the tribes of Manasseh were reunited by God guiding the migrations of many Saxons and Germans from the British Isles and Germany to the American colonies and, later, the new American nation. Since a major tribe like Manasseh had sub-tribes taking different migrational routes to an eventual reunification in the modern era, it would not be surprising to see that this same thing happened to the tribe of Asher.

My 4-book printed set and my E-book entitled, The Lost Ten Tribes of Israel…Found! include the full history of the migrations and modern whereabouts of the various tribes of Israel, including the tribe of Asher. For additional documentation concerning topics discussed above, please read my free articles, Are We Living in the Biblical Latter Days? and The USA in Bible Prophecy.